'There’s plenty of information on what the salaries and payments have been for mayors and councillors all along, and there’s been full disclosure throughout,' Tony Van Bynen responds
Oct 4, 2019 12:19 PM By: Kim Champion 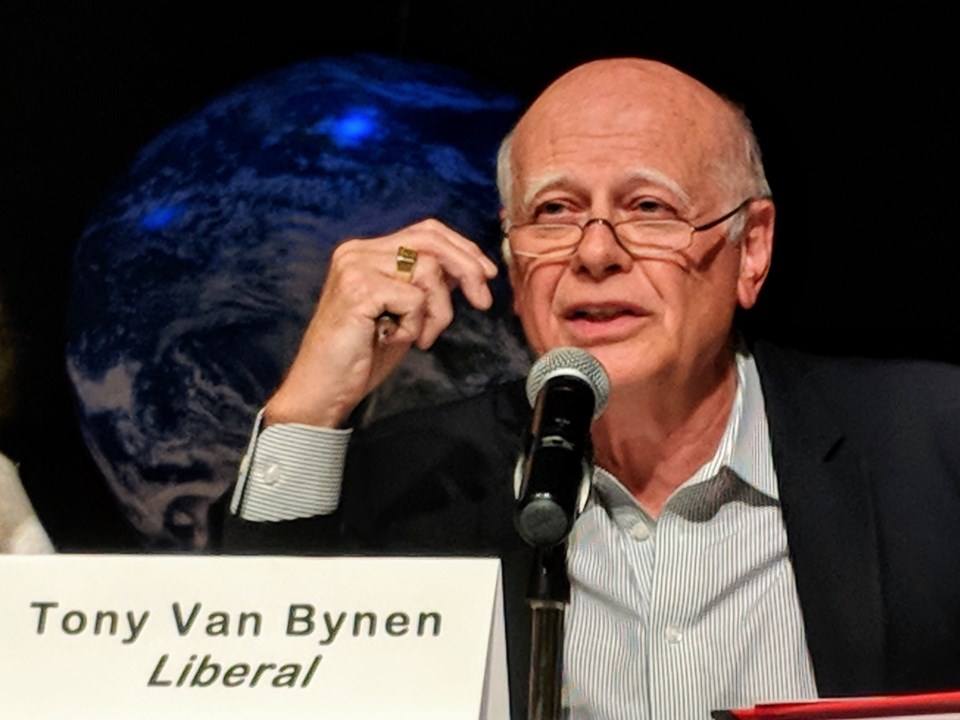 Newmarket’s former three-term mayor and federal Liberal candidate Tony Van Bynen is taking some local heat about severance he claimed after stepping down last fall from an 18-year career in municipal politics.

The longtime politician announced his retirement from the local political scene in early 2018. And just seven months after handing over the chains of office, Van Bynen in May 2019 declared his intention to seek the Liberal nomination for the federal riding of Newmarket-Aurora, to replace outgoing one-term MP Kyle Peterson.

Two Newmarket residents are crying foul over what they say is a lack of transparency regarding the two severance payouts Van Bynen claimed for his years of service on the Town of Newmarket and Regional Municipality of York councils.

Both the local and regional governments offer departing politicians severance in recognition of “the valuable contribution made by them to the community”, whether they retire from public life, as Van Bynen did, or are defeated in an election. York Region’s mayors and local and regional councillors automatically earn a seat on regional council, and receive additional compensation.

At issue is $67,068 in severance from the York Region government that didn’t appear on the region’s 2018 end-of-year financial statement and, consequently, was not reported in NewmarketToday’s article on local politicians’ 2018 compensation. Van Bynen received $95,631 in severance from the Town of Newmarket, according to the municipality’s 2018 end-of-year compensation statements.

The additional payment — which will not appear publicly in the regional government’s financial report until March 2020, according to a regional spokesperson —was brought to light in late August by Newmarket political blogger Gordon Prentice.

In total, Van Bynen’s severance entitlements when leaving municipal politics in 2018 were $162,699, both of which were held over to the 2019 tax year. He received the payments in January 2019, according to spokespersons at the town and region.

Prentice, himself a former British Labour Party MP, declined to be interviewed, but the council watchdog’s efforts at holding local politicians accountable are well-documented on his blog.

“Van Bynen is famously economical with the actualité,” Prentice wrote in a June 24, 2019 post. “While mayor, he failed to disclose all sources of income. He was always getting more than was reported on the Sunshine List. A skilled operator, he never gave a straight answer to the simple question: How much do you make as mayor? The money he got from sitting on the hydro board was a state secret until I forced the issue in 2015. It is now routinely published.”

Most recently, Prentice filed a freedom of information request with the regional government to get more details on Van Bynen’s severance payout.

In an interview with NewmarketToday, Van Bynen said he asked for both the 2018 regional and municipal severances to be deferred to the upcoming year “solely for tax purposes”.

“That’s an option that’s available for all mayors and all members of council and the reason for it is the severance, in addition to the salary base, would put you in a different tax bracket,” said Van Bynen. “For good tax planning purposes, that income is deferred into the following year and it will be disclosed, as per the normal practices.”

A York Region spokesperson confirmed that Van Bynen’s application for severance was received on Nov. 13, 2018, and the payment was issued Jan. 24, 2019. The Town of Newmarket also confirmed it issued Van Bynen’s severance in January 2019.

Departing politicians have a six-month window to apply for severance.

A York Region investment specialist with a background in accounting said that deferring a lump-sum payment to the next tax year is not only a permitted practice but one that can reduce the tax bite, depending on your income in that particular year.

“It makes no difference to the payor when they release the funds, they’ll be issuing the same amount whether it’s in one tax year or another,” said Ron Kirsh. “But the person receiving that money, depending on their income that year, can be looking at reducing their tax bill significantly.”

The issue is about trust and transparency for resident Darryl Wolk, a fiscal conservative and years-long vocal critic of local government who ran unsuccessfully in Newmarket’s 2014 municipal election for the deputy mayor and regional councillor seat.

“You know, if he (Van Bynen) had just come clean and said, here’s the severances I applied for, and this is a normal tax procedure, at the end of the day my total compensation leaving was X, people would just have to accept that information,” said Wolk, who has long been a political foe of the former mayor. “But the fact that a citizen has to file a freedom of information request to find out how much our mayor makes, that’s ludicrous.”

“The entire process has been completely non-transparent,” he said.

Wolk is calling on Van Bynen to step down as the Liberal candidate in the Newmarket-Aurora riding. The resident's frequent posts on social media about the issue often create a flurry of support and like-minded comments, while other comments suggest, "It's perfectly legal to delay a payout or part of a payout to the next year."

For his part, Van Bynen said that when it comes to public disclosure of compensation, the Town of Newmarket “is accountable, transparent, and stands toe-to-toe with any other municipality anywhere in this country”.

“I think I’m the best candidate for this upcoming election and I will absolutely not step down. A request like that is totally unwarranted,” Van Bynen said.

“There’s plenty of information on what the salaries and payments have been for mayors and councillors all along, and there’s been full disclosure throughout," he said. "The reality is that this type of compensation package is common among all mayors in York Region, councillors and, so to me, it’s fair and equitable compensation for the job that was done."

Neighbouring Simcoe, Muskoka makes masks mandatory
Jul 7, 2020 4:25 PM
Comments
We welcome your feedback and encourage you to share your thoughts. We ask that you be respectful of others and their points of view, refrain from personal attacks and stay on topic. To learn about our commenting policies and how we moderate, please read our Community Guidelines.