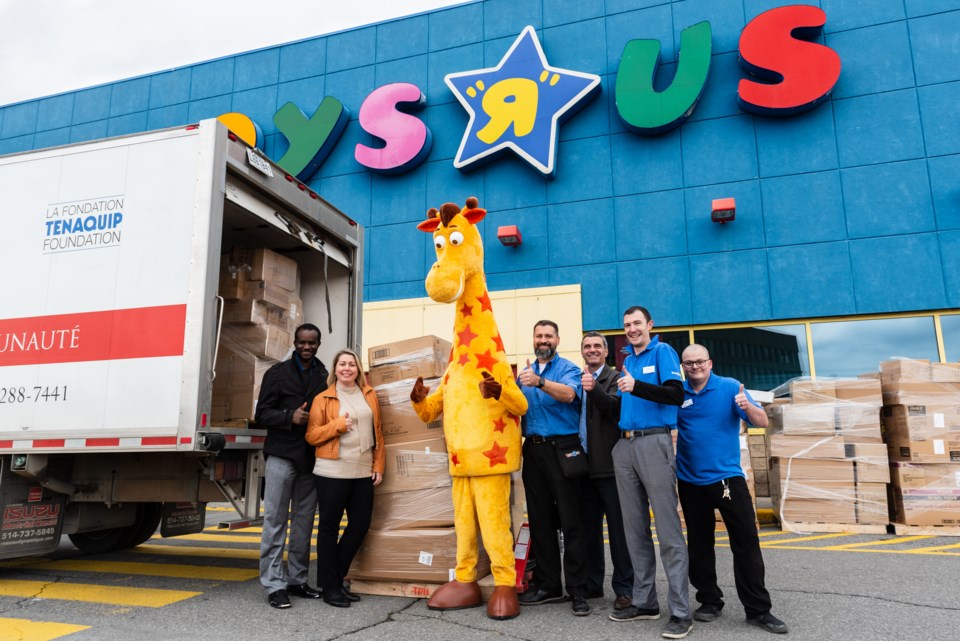 Newmarket's Toys"R"Us Canada store took part in the campaign that donated more than 700,000 toys to The Salvation Army and Bay Street Fore a Cause toy drives. Supplied photo/Toys "R" Us Canada

In addition, more than 100,000 toys were donated to Bay Street Fore a Cause, in support of various children’s-based charities. Known for bringing joy to children through the magic of play, Toys“R”Us Canada’s donation spreads joy and Christmas cheer far and wide across the country to the children who need it most.

“We believe play is a right for children, so it’s incredibly rewarding for us to be able to make this donation and spread the joy of play this Christmas,” says Melanie Teed-Murch, president, Toys“R”Us Canada. “We commend The Salvation Army for its efforts to support children and families in need and are proud to align ourselves with its toy drive initiative.”

“The Salvation Army couldn’t extend its reach as far without the support of community allies like Toys“R”Us Canada,” comments Lt-Colonel John Murray, Secretary for Communications for The Salvation Army. “This donation helps us put a toy under the Christmas tree for thousands of children across the country, and we’re truly grateful for that.”

Further to this donation, Toys“R”Us Canada has also donated more than 100,000 toys to Toronto-based not-for-profit, Bay Street Fore A Cause, which supports various children’s-based charitable groups throughout the Greater Toronto Area. Recipients of this donation include Big Brothers, Big Sisters of Toronto, Grant Thornton Foundation and Good Shepherd.

Since 1984, Toys“R”Us Canada has been Canada’s dedicated specialty retailer of toys and baby products. The company brings national brands, exclusive products, innovative loyalty programs and unique partnerships to Canadians at its 82 stores across Canada and through its e-commerce sites Toysrus.ca and Babiesrus.ca. Committed to giving back to communities, Toys"R"Us Canada focuses its charity efforts on supporting children and their families whether enhancing resources and services, helping development through play or offering distraction and encouragement to seriously ill children. Toys"R"Us Canada is a subsidiary of Fairfax Financial Holdings Limited. For store locations and convenient online shopping, visit www.toysrus.ca andwww.babiesrus.ca.

About The Salvation Army

The Salvation Army is an international Christian organization that began its work in Canada in 1882 and has grown to become one of the largest direct providers of social services in the country. The Salvation Army gives hope and support to vulnerable people in 400 communities across Canada and in 131 countries around the world. Its community and social service activities include: hunger relief for individuals and families through food banks and feeding programs; shelter for people experiencing homelessness and support for those needing housing; rehabilitation for those struggling with addiction; long-term care and palliative care; Christmas assistance such as food hampers and toys; after-school programs, camps, and school nutrition programs for children and youth; and life-skills classes such as budgeting, cooking for a family, and anger management. When you give to The Salvation Army, you are investing in the future of marginalized and overlooked people in your community.

Parents, community members needed for YRDSB advisory committee
May 24, 2020 1:45 PM
Comments
We welcome your feedback and encourage you to share your thoughts. We ask that you be respectful of others and their points of view, refrain from personal attacks and stay on topic. To learn about our commenting policies and how we moderate, please read our Community Guidelines.