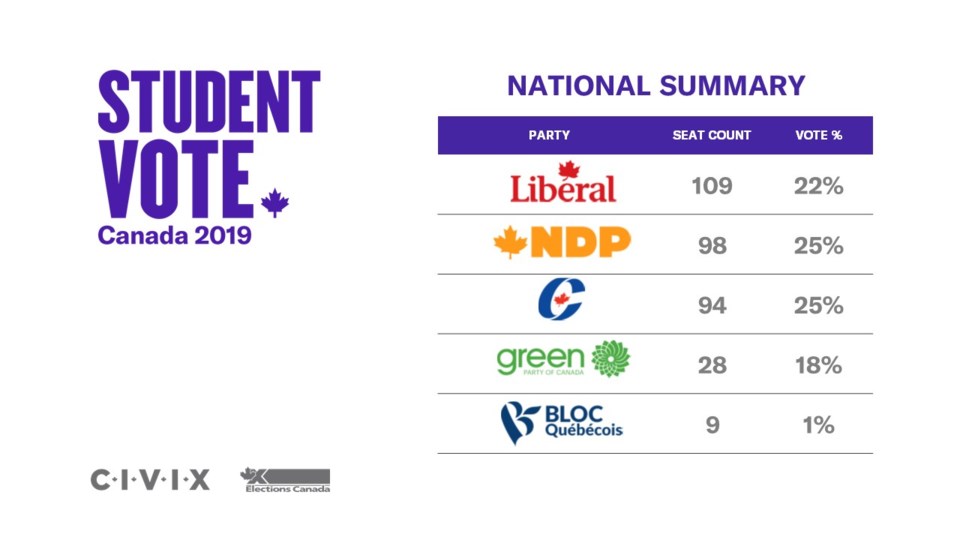 After learning about the electoral process, researching the parties and platforms, and debating Canada’s future, students cast their ballots for the official candidates running in their school’s riding.

Here’s how the mock student vote broke down:

• The Liberal Party took 22.3% of the popular vote and won 109 seats, forming a minority government. Justin Trudeau won in his riding of Papineau.

• The NDP will form the official opposition with 24.8% of the popular vote and 98 seats. Jagmeet Singh won his seat in Burnaby South.

• The Conservative Party took 25.0% of the popular vote and won 94 seats. Andrew Scheer won his seat in Regina—Qu’Appelle.

• The Green Party took 18.2% of the popular vote and won 28 seats. Elizabeth May won her seat in Saanich—Gulf Islands.

• The Bloc Québecois took 1.3% of the popular vote and won 9 seats. Yves-François Blanchet did not win his seat in Beloeil—Chambly.

“We are thrilled with the turnout for Student Vote Canada 2019,” says Taylor Gunn, President and CEO of CIVIX Canada. “We are grateful for all the teachers that dedicated time and energy to cultivating the next generation of voters.”

“Elections Canada is proud to have helped make Student Vote Canada 2019 possible,” says Stéphane Perrault, Chief Electoral Officer of Canada. “This program is one of the ways we educate future voters and help raise active citizens.”

To view the complete results, including a riding and school-by-school breakdown, visit here.

Student Vote is a program of CIVIX, a non-partisan registered Canadian charity dedicated to strengthening democracy through citizenship education among school-aged youth.

Student Vote Canada 2019 is made possible by Elections Canada, an independent, non-partisan agency that reports directly to Parliament.