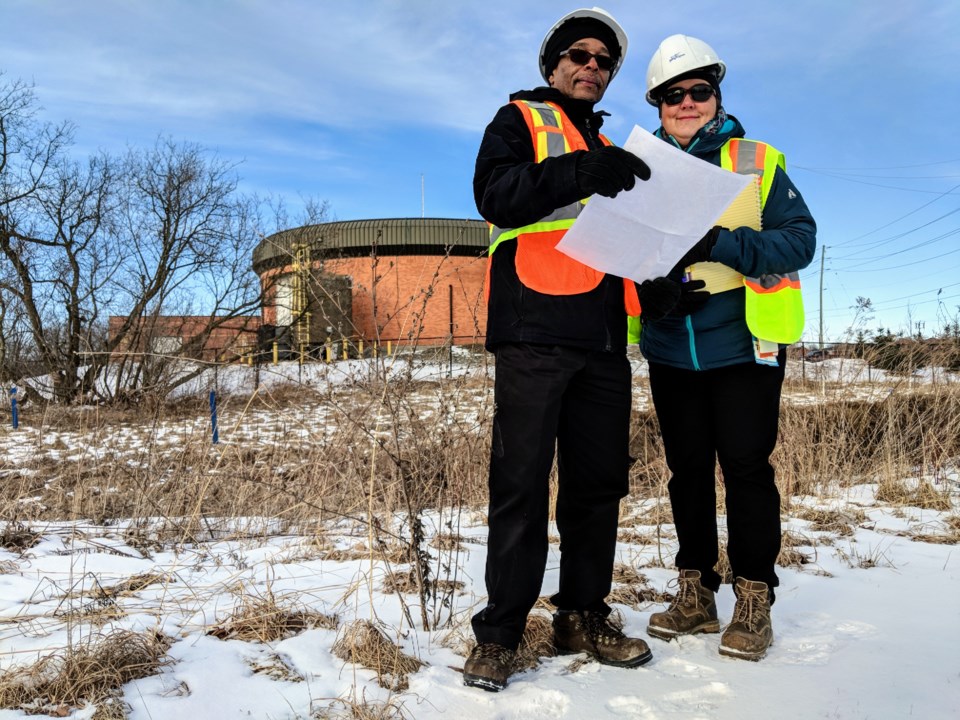 The Regional Municipality of York's Norman Cato, project manager in capital planning and delivery, and the department's design technologist, Lauren Stephanoff, are shown here at the site of the Newmarket Sewage Pumping Station on Bayview Parkway. The plant has been approved for upgrades beginning in 2019, to increase capacity and provide sewage spill protection. Kim Champion/NewmarketToday

The stalled $715 million Upper York Sewage Solutions project could soon rev up now that it has caught the attention of Newmarket-Aurora MPP and Deputy Premier Christine Elliott.

Considered leading-edge and a first of its kind in Canada, the Regional Municipality of York’s proposed and funded new wastewater treatment facility in East Gwillimbury has so far faced a nearly three-year delay over strong opposition from the Chippewas of Georgina Island First Nation.

Located just off the southern shore of Lake Simcoe, the First Nation band leadership outright rejects the region’s sewage plant proposal as it stands based on concerns about how the development may impact the health of its members along with its constitutionally protected Indigenous rights to fish and hunt, among other things.

Georgina Island First Nation environmental and bylaw coordinator Brandon Stiles says the government’s duty to consult has been “inadequately executed” and the First Nation will continue its opposition to the project.

“We are looking at all of our legal options on how to approach this as a First Nation,” Stiles said. “We have too many concerns and questions about the development and we’re going to challenge it right to the very end until we’re satisfied that our Indigenous rights are not being impacted. And, if they are, then we want to discuss accommodations and how those impacts can be accommodated.”

Elliott, who is also Ontario's health minister, is now being briefed on the issue and “is committed to working with municipal partners to deliver critical infrastructure to the people of Newmarket and Aurora,” constituency manager Dawn Gallagher Murphy said.

That commitment also includes an undertaking to deliver a letter to Premier Doug Ford noting the project’s urgency to provide additional service for the more than 150,000 new people and jobs projected to hit Newmarket, Aurora and East Gwillimbury by 2031, Newmarket Mayor John Taylor said.

“We will be facing, within a five-year time horizon, the need to say no to somebody who says, 'I’ve got an affordable rental housing project to move forward'," Taylor said. “I’m doing everything I possibly can, as is York Region, Aurora and East Gwillimbury, to make sure that this new government understands that if they want to increase housing supply, which they do, and if they want to reduce red tape, which I believe they do, and they want to make sure we’re open for business, which they do, there is no easier way than signing the environmental assessment and moving forward.”

“The province has the power to approve the project and I believe this government will act on this,” Taylor said.

Sewage. Other than remembering to flush, it’s not something we think much about when local wastewater treatment systems are working well and handling the influx of new housing and businesses that are the hallmark of a growing community such as Newmarket.

But when sewage systems are at or approaching maximum capacity, and can't keep up with projected growth and development — as is the case now for Newmarket — it's a problem, local politicians say.

An overloaded system can clog up the building permits that would bring, for example, the mix of high-density, affordable rentals and home ownership options that many Newmarket residents and officials say our community desperately needs.

The Regional Municipality of York foresaw this blockage and began devising a solution about 10 years ago known as the Upper York Sewage Solutions project.

If approved by the provincial government, the project would include a new, reverse-osmosis water reclamation centre in East Gwillimbury, along with a project-specific total phosphorous offsetting program to mitigate the plant's local impact. While a smaller part of the project, significant upgrades to two sewage pumping stations in Newmarket were approved separately by the province based on urgent need.

Ultimately, that translates into the ability to pump out an additional 47 million litres per day of treated wastewater into the Lake Simcoe watershed to accommodate growth in the three municipalities.

“I think it’s a very innovative solution,” Rabeau said. “We have to look at not just sewage solutions, but treatment for our watershed. And the health of our watershed is something people need to think about. It’s hard for people to understand because they associate this with growth and some of the negativity behind that, but this is about environmental protection and the way of the future for protecting the planet and all our watersheds throughout Ontario.”

Local officials say the proposed plant is crucial to northern York Region and, without it, community and business growth could come to a grinding halt just five years out in 2026, the hoped-for project completion date.

“I have nothing but respect for the Indigenous community of Georgina and I understand that they are not satisfied with the consultation or the project,” Taylor said. “That’s absolutely their right, but at some point, a decision has to be made.”

In a Homeland Declaration published online and dated September 2017, which applies to all industrial and urban growth activities proposed across the Lake Simcoe watershed, the Chippewas of Georgina Island First Nation called on the Environment and Climate Change Ministry to reject York Region’s proposal as it stands.

It has also collected 35,418 signatures on a now-closed petition to the ministry to reject the region’s proposal.

The band leadership lays out its concerns as follows:

Environmental and bylaw coordinator Stiles expressed frustration about not receiving answers to their most pressing health concerns with regard to emerging contaminants such as pharmaceuticals, microplastics and personal care products.

“All we get back is that they’re working on researching the effects of those,” Stiles said. “Georgina Island is not OK with that because we’re obviously in the middle of Lake Simcoe and we don’t want to hear that there are adverse effects after this plant has been operating.”

So, if not the current solution, then what?

“It would be up to us to find another solution,” York Region’s Rabeau said. “But you have to understand, we’re practitioners, we’re environmental engineers, we looked at the most viable solution and that’s what we have come up with. The province has to do something, approve something. This water reclamation centre is the preferred alternative for this project.”

Why: The wastewater treatment facility, a first for Canada that will use microfiltration and leading-edge reverse osmosis technology, will produce clean, treated water that will flow into the East Holland River on the Lake Simcoe watershed, along with processing reclaimed water for uses that include sod and tree farms.

Reclaimed water helps to reduce demand on surface and groundwater resources. In addition, a project-specific total phosphorus offsetting program has been developed to reduce some of the impacts of the new sewage plant and also remove phosphorus from other sources within the Lake Simcoe watershed.

Status: Not yet approved. An environmental assessment that began in 2010 was filed to the Environment and Climate Change Ministry for approval in 2014. In 2016, the ministry reviewed the project and confirmed the region met all the requirements for its individual environmental assessment. However, the Chippewas of Georgina Island First Nation has raised objections to the project. That consultation is ongoing.

Why: The installation of two new pressurized sewer force mains and modifications to the Newmarket and Bogart Creek sewage pumping stations will help increase system reliability during high-flow conditions and extreme wet weather events, as well as provide sewage spill protection for current and future residents.

Status: Approved. The Ontario government in March 2018 issued a declaration order to exempt the twinning component of the Upper York Sewage Solutions project from the requirements of the Environmental Assessment Act, based on urgent sewage needs in Newmarket and Aurora. The project is in the tendering process and construction is expected to begin this year.

Pandemic poll: Most Ontarians expect workplaces to lockdown again
Aug 12, 2020 1:44 PM
Comments
We welcome your feedback and encourage you to share your thoughts. We ask that you be respectful of others and their points of view, refrain from personal attacks and stay on topic. To learn about our commenting policies and how we moderate, please read our Community Guidelines.