Dr. Leslie Oliver and his wife, Mary Jeanne, are leaving a rich culutural and historical legacy, as they prepare to move from their Aurora home that has been occupied by members of the family for almost a century
May 3, 2021 7:30 AM By: Brock Weir, Local Journalism Initiative reporter 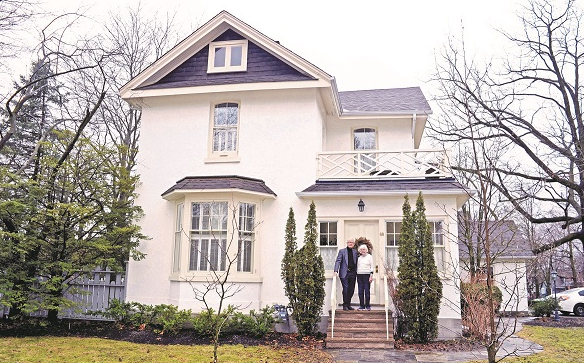 Dr. Leslie Oliver and wife Mary Jeanne at their heritage home on Spruce Street, which members of the Oliver family have called home for nearly a century.

There was work going on in the “lab” downstairs.

A laboratory might not be something you would associate with a home in Aurora’s Heritage Conservation District, but this residence on Spruce Street is not the average home.

Mellowed by age and, when they are in full foliage, almost hidden by mammoth trees on the front lawn, the “lab” was where so much of Aurora’s history has been preserved by Dr. Leslie Oliver. It also builds on a legacy founded on Spruce where his father, T.H. Oliver, stayed two steps ahead of the technological curve, pioneering many innovations that became the hallmark of the company, founded in 1924, that still bears his name.

Members of the Oliver family have called Spruce Street home for nearly a century, but this month marks the end of a chapter for the street and a new one for the Olivers.

Now in their 90s, Leslie, founder of the Aurora Historical Society and a leading expert in the field of material culture, and wife Mary Jeanne, a music teacher who, in turn, has taught generations of residents their way around the 88, are preparing a move to Owen Sound to be close to family. They – with an assist of the Aurora Museum & Archives and the Aurora Historical Society – are excavating through 97 years of community milestones lovingly curated by the family that do nothing short of tell the history of Aurora in the 20th century.

“We are very conscious of the shoulders we stand on while we’re here and how we profit by those who have gone before,” says Dr. Oliver, whose family first settled in the Whitchurch Highlands in the 1790s.

History has always been a way of life for Dr. Oliver. He has never been one to be very nostalgic, however. For him, history is a “prologue” to where we are going.

He founded the Aurora Historical Society (AHS) in 1963 to serve as an advocacy body for local heritage securing such “jewels in the crown” as the Church Street School and the Grand Trunk Railway, now served by GO Transit.

Nearly 60 years later, he maintains a passion for the AHS and his community.

As he and Mary Jeanne chatted on their front porch recently, Jeremy Hood of the Aurora Museum and Archives was down in the lab preparing boxes of material curated over the years by Dr. Oliver that span the century that was.

He estimates there are roughly 25 boxes of archival material that will make their way to the Archives, including “a very substantial collection of early images of Aurora going right back to the 1920s."

“One of the things [father] Howard Oliver did in his early years is he became very adept at photo work,” says Leslie. “He developed a very substantial dark room down in the shop and in his house, a lot of early colour work. He was one of the first generation of high-tech workers. It has been a two-generation contribution to the community. It tells very substantial stories of Aurora, particularly in the post-World War Two period where evolution has been very significant to say the least. It’s the cultural orientation of the town.

“I am not particularly interested in the Oliver name. What I am interested in is the use of archival material to tell important stories of who we are, how we got here, and the implication for future planning and development. It’s about understanding things: what they do, how they work, and what results and consequences there are for Canadian culture and society. We can see the physical changes in this town and ask the questions: what are the implications for the future of the town in terms of the new direction it has taken and what has been lost? These are the very philosophical questions until you burrow down to the reality with some careful thought of what it means.”

This interest in Aurora’s cultural identity is not limited to history. As an educator, Mary Jeanne has been instrumental in instilling a love of music in countless Aurora youngsters.

“I taught kindergarten at George Street School for about six years to fill a gap in our family when we needed some extra finances when [Les] went back to school,” she says, noting she is part of a group of music teachers that have sponsored concerts for the community, including some at her grand piano, which, prior to its recent pre-move sale, once took pride of place in their Spruce Street home.

But they’re not leaving it all behind.

As passionate supporters of the Aurora Cultural Centre, particularly its music programs, both Olivers are eagerly anticipating the redevelopment of Library Square and look forward, even at a distance, to seeing how things progress. Even remotely, they still hope to stay involved in the community even as “ex-pat Aurorans” and, on return trips home, trying out one of Aurora’s new hotels.

“There are lots of things we can continue to contribute, reflecting our interests,” says Leslie.