Oh, the weather outside is truly frightful, veteran broadcaster says

Municipalities must prepare to deal with the human aspect when responding to extreme weather events
Nov 18, 2019 1:48 PM By: Kim Champion 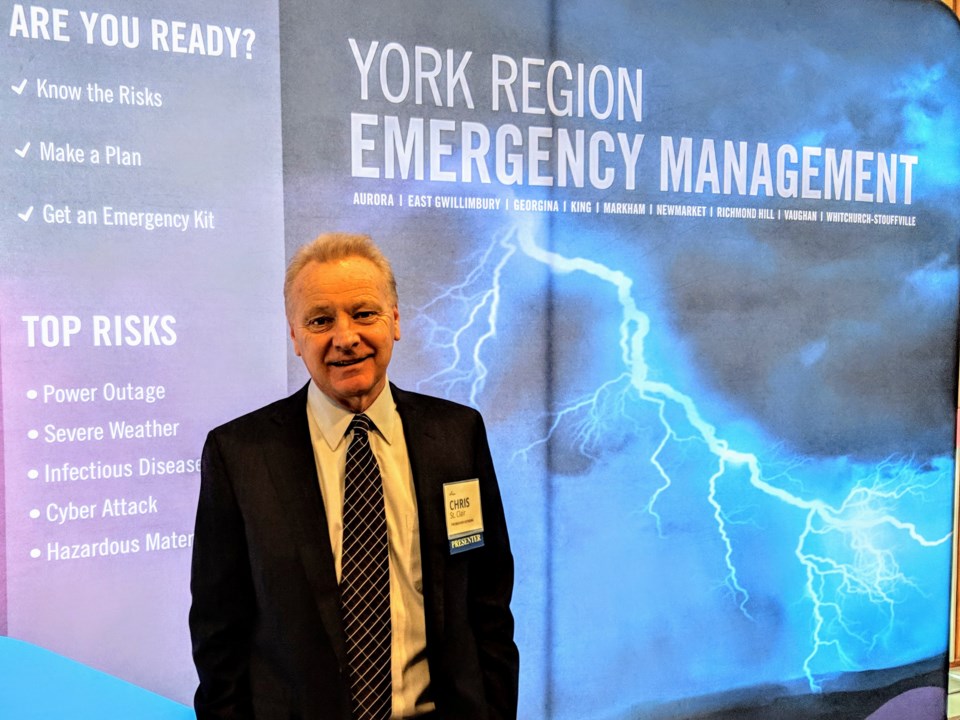 Don’t blame the weather forecaster if the rain pelts down on your parade. The frequency and intensity of weather events fall squarely on the shoulders of climate change, says a veteran broadcast journalist with The Weather Network.

“The weather story is the story of climate change, and that means we will get more frequent and intense storms, that’s the bottom line,” said weather broadcaster Chris St. Clair, who hosts several popular weekend shows on the network and is the author of Canada’s Weather: The Climate that Shapes a Nation. “The thing is, we have to take a look at every single event and say, because the climate is changing our weather is changing on a daily, seasonal and long-term basis.”

St. Clair was the keynote speaker at the Regional Municipality of York’s emergency management conference, The Impacts of Climate Change: Keeping it Real, held Nov. 15 at Cardinal Golf Club in King.

He shared observations from his vast first-hand experience reporting on the fires that ravaged Alberta, the hurricanes that decimated islands in the Caribbean and parts of the United States, tornadoes in Ottawa-Gatineau, flash floods, ice storms and blizzards that crippled some of Ontario’s towns and cities.

Most strikingly, St. Clair said local first responders and others who will be deployed during a weather emergency must be prepared to handle the human aspect of such disasters.

“The thing is, when people are in stressful situations, it changes their personality and mindset, and these are all things that first responders have to deal with,” said St. Clair, recalling when Hurricane Irma hit Florida in 2017. “We went to a trailer park and there was not much left of it, but the people were still there because they didn’t have the economic ability to leave, they had no food or water and were waiting for help. First responders have to deal with helping them to pick up the pieces and keep them out of harm’s way.”

Representatives from York Region’s nine municipalities, including first responders, municipal staff, and emergency management experts attended last Friday’s conference with the goal of gaining a deeper understanding of the local challenges posed by climate change and how to be better prepared to respond to an emergency.

York Region is now developing its first climate action plan. And the Town of Newmarket has recently updated its emergency plan to respond effectively to a declared emergency related to such things as the environment, public safety and public health.

For example, it’s predicted that by 2050, the region itself will see a 216 per cent increase in extreme heat days, which includes a 300 per cent increase in the number of days when the thermometer soars to 40 C or higher. As well, an annual average increase in rainfall of 59 mm is anticipated, with wilder weather generally that could see a 33 per cent rise in intensity of extreme storms.

If you are wondering what this winter has in store, you need only look to last week’s first blast, St. Clair said.

“Our forecast for this winter is there will be a pool of very cold air that sits over Hudson Bay, occasionally it will come south and give us some cold days. But on average, the temperatures will be warmer by a few degrees than usual, which means we’re going to be right on the storm track in southern Ontario. Warmer means we’re in trouble because there’s the potential for ice storms in far greater numbers.”

“A repeat of last winter is also going to happen,” said St. Clair. “Last winter, the Great Lakes didn’t freeze over, and this year won’t be cold enough again, and that means relentless lake-effect snow.”

“The trouble with relentless lake-effect snow is, while it’s great for the ski industry, what it does to the watershed north of here is it fills it with snow. Last year, the watershed had more snow than usual, which is what led the flooding problems we’ve had,” he added.

The numbers paint a poignant picture of how damaging water can be to people and property.

“Water is now the new fire,” said Pete Karageorgos, industry and consumer relations director with the Insurance Bureau of Canada. “Insurance used to be about fire risks, but water is now the leading cause of loss.”

The national agency reports $2.1 billion in insured catastrophic losses in Canada in 2018. That represents a dramatic and steady incline. For 25 years between 1983 and 2008, for instance, about $414 million on average a year was paid out to cover losses due to extreme weather events.

Overland home flood insurance was only offered for the first time in 2015.

While the region and local municipalities are adjusting its emergency preparedness plans, there is plenty that residents can do to be better prepared in the event of an emergency.

For more information on how to prepare and what to do in the event of a power outage, severe summer weather, health emergencies, winter storms, or a hazardous material spill, visit here.

Here are some observations about the changing weather, as told by Chris St. Clair:

“If we think of climate change as having a cold, then the weather is all the symptoms of the cold. ... the tight chest, runny nose, sneezing and coughing. So, our coughing and sneezing is getting really bad with climate change. We don’t know what the ending will be.”

“It’s important that the climate change story be understood by a lot of people because it’s going to become, increasingly, over the rest of our lifetimes, the most important story that we all talk about. It’s a difficult subject for people, because it’s so often seen as a negative, and people have a sense that they can’t do anything about it.”

“Hurricane Dorian began as a tropical wave on Aug. 19, 2019, and slowly formed into a hurricane. By Labour Day weekend, it was a category 5 that reached the highest over Bahamas. The winds were steady and constant at 293-km/hour. It was the strongest storm ever to go over the Bahamas. There was an estimated $7 billion in damages, thousands of homes destroyed, 70,000 people were living in unlivable conditions, 61 people died, whose bodies were recovered, and more than 400 are still missing to this day in the Bahamas. The true death toll is likely to never be known from that storm.”

“We can get storms as strong as a hurricane during the winter off the coast of Atlantic Canada, with wind speeds and precipitation amounts that are the same as Dorian, we just don’t call them hurricanes because the water temperature is different.”

“A storm surge in Prince Edward Island, as a result of hurricane Dorian, erased two metres of coastline on the island’s entire north coast. There was also damage to 80 per cent of the trees on the north coast. This was just a tropical storm when it came on shore in the Maritimes. In Nova Scotia, 80 per cent of all customers lost electricity, 60 per cent in New Brunswick, and the same in PEI.”

“Climate science says the progress we’re making in cutting emissions doesn’t (cut it). The more heat and energy we’re putting into the atmosphere is also being put into the oceans, and water will hold heat much longer and more efficiently than air. The trouble is we’re warming the oceans and that’s the fuel that drives more frequent and intense storms and it’s what’s giving way to widespread storm surge (a rising of the sea).”

“2017 was one of the worst years for hurricanes, mostly in the U.S. Harvey, a category 4 hurricane that formed off the coast of Texas in the Gulf of Mexico, made landfall in Houston. It rained in Houston for four days. But because the water is so warm and the atmosphere is warm, a warm atmosphere will hold more moisture than a cold atmosphere. The atmosphere was able to hold an abundance of moisture, and they had five feet of rain in Houston. Emergency services did 17,000 rescues of people from homes and cars, 30,000 people lost their homes to flood damage, and 100 died.”

“I was in Florida for all of hurricane Irma, it was a category 5, with 300-km/hr winds, it wiped out some of the keys, and made landfall just south of Naples. That whole southwestern part of Florida had no power for three days. We were in Miami, initially, a city of 2.5 million people, and nobody was there. Everybody was evacuated. People look panicked, there was no electricity, gasoline, no cellphones.”

“With Irma, 134 people died, damages were about $80 billion, the big hotels on the barrier islands were shut down, but I saw the storm surge take the beach and put it up on the roads. It was exactly like a winter storm here, but it was all sand and they were using graders to pile it back onto the beach. It looked like snow banks but made of sand.”

“I was in Fort McMurray (Alta.) for the fires. This year, 2019, was the worst in 25 years for fires in Alberta, but we don’t hear much about it because it burned mostly where there were no people. There were small towns and communities at risk, but it didn’t impact a major area.”

“That’s the problem with climate change, it’s not getting the attention it deserves. Nearly 800,000 hectares of Alberta burned this year, that’s three times more than the five-year average.”

“Climatologists expect that the western Arctic is likely to be 25 C above average this winter. Keep in mind the average is -30C, but that’s a huge swing. The changing patterns are a problem because when you have that heat in the Arctic, it sets off high pressure along the entire Pacific coast. We’ve seen California burn the last two years. Last year was a tragic one for the north of San Francisco.”

“Fire season used to officially start April 1 along the west coast of Canada and Alberta, now it starts March 1.”

“If we’re holding more moisture in the atmosphere because it’s getting warmer, we’re getting heavier rains in the summer, and we’ve seen what flooding does in the Toronto area.”

“The insurance claims almost mirrors the extreme weather (over the past 30 years). When you start tracking back, things have escalated at a high pace.”

“With this winter that’s coming, we are going to get more snow, but the towns can deal with that with their snow removal budgets. It’s the accumulation of snow and moisture in the watersheds to the north that’s a problem, and flooding is the biggest concern. Flooding is going to become part of our regular existence.”

“There’s solutions out there to slow down climate change and global warming, just look at advances in solar energy and solar panel technology. We need to get it into everyday use. We need to push all levels of government to change their climate change policies, and to think more long-term about this.”

“The energy that all of humanity on planet Earth uses in one year is the equivalent of all the energy that the sun emits in less than an hour toward our planet.”

Enforcement blitz wraps up with charges for Promenade Mall, Longo's, Dollarama in Vaughan
Dec 1, 2020 7:45 PM
Comments
We welcome your feedback and encourage you to share your thoughts. We ask that you be respectful of others and their points of view, refrain from personal attacks and stay on topic. To learn about our commenting policies and how we moderate, please read our Community Guidelines.