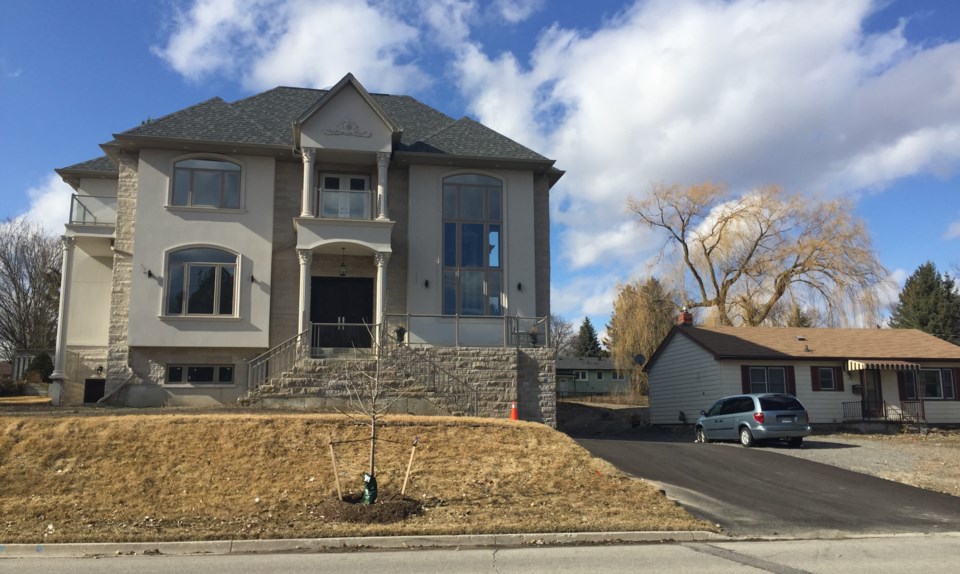 The temporary building ban on so-called monster homes, such as the one shown here on Elgin Street in Newmarket, will continue past its Jan. 21, 2020 expiry date. File photo/Debora Kelly/NewmarketToday

The Town of Newmarket’s temporary one-year building ban will likely be extended for at least six months into 2020 as its companion neighbourhood compatibility study runs overtime.

The freeze on new home building on single or vacant lots and most additions to existing homes in many established and emerging areas in Newmarket came into force on Jan. 21, 2019.

It is known as the interim control bylaw and is meant to address concerns among some local residents about so-called monster home construction that is not compatible with the look and feel of existing houses within the town’s mature neighbourhoods.

On Monday, Newmarket council was presented with early findings from the $150,000 study, the final product of which is expected to help the town draft new policies to guide infill development that is in line with a neighbourhood’s identified unique characteristics.

Blair Scorgie, a consulting planner and urban designer with firm SvN, said that so far about 100 residents have provided feedback on their neighbourhoods in two public forums, as well as online at the town’s digital engagement website, Hey Newmarket.

The key findings are as follows:

“The residents we heard from were primarily living in the established inner-town neighbourhoods, over the age of 50, have lived there for at least 20 years, and are at or nearing the age of retirement,” Scorgie said. “It’s a demographic of people who have been in their neighbourhoods for a long time and know what’s working and not working well.”

Scorgie noted that three particular types of neighbourhoods emerged during its consultation that will be the focus of the study. Those include organic, traditional, and contemporary neighbourhoods.

Organic neighbourhoods are characterized as being built prior to the 1940s, feature short blocks, many intersections, landscaped boulevards and extensive tree canopy, mature trees, continuous sidewalks on one or both sides, overhead utilities, and rectangular lots with varied lot dimensions and parking configurations, and front and side yard setbacks, for example.

Traditional neighbourhoods, meanwhile, were developed between the 1940s and 1990s, and have the appearance of a suburban neighbourhood. Some of its characteristics include long blocks with few intersections and wide roads, buried utilities, varied building heights of one to two storeys, and front driveways with attached garages.

The newest neighbourhoods built after the 1990s are known as contemporary and are similar to the traditional neighbourhood. Characteristics consistent with this type of neighbourhood include a modified grid street pattern, small to rectangular and pie-shaped lots, shallow to moderate front yard setbacks, and shallow side yard setbacks. As well, the homes are mainly two storeys.

“It’s not news to any of us that Newmarket is growing, evolving, and it’s beginning to intensify,” Scorgie said. “We’ve exhausted outwards growth potential and we’re now looking at regenerating and re-intensifying the existing built-up area of the town itself.”

By contrast, Scorgie said the town’s established neighbourhoods are not specifically targeted for intensification, but they are changing.

“Some degree of growth and change is occurring through infill development, creation of new lots, severancing of larger lots, and redevelopment of existing buildings, such as the introduction of multi-unit residential buildings where once there was a single dwelling,” he said. “These sorts of changes have and can be done in quite a tasteful and respectful manner, which generally respects and reinforces the prevailing existing character of these neighbourhoods.”

Mayor John Taylor and Councillor Bob Kwapis expressed concern about extending the temporary building ban beyond its Jan. 21, 2020 expiry date, but acknowledged the importance of drafting new policies around an issue that has proved contentious as residents regularly turn up in council chambers to battle over neighbourhood development applications.

Residents have the opportunity to provide their feedback at a second public consultation meeting planned for October 2019. Visit here for more information.

Residents' plight tests Newmarket's temporary monster home ban
Mar 20, 2019 1:21 PM
Comments
We welcome your feedback and encourage you to share your thoughts. We ask that you be respectful of others and their points of view, refrain from personal attacks and stay on topic. To learn about our commenting policies and how we moderate, please read our Community Guidelines.