77 per cent of residents who voted online for the first time in Newmarket's 2018 municipal election report being 'very satisfied' with the experience
May 15, 2019 6:00 PM By: Kim Champion 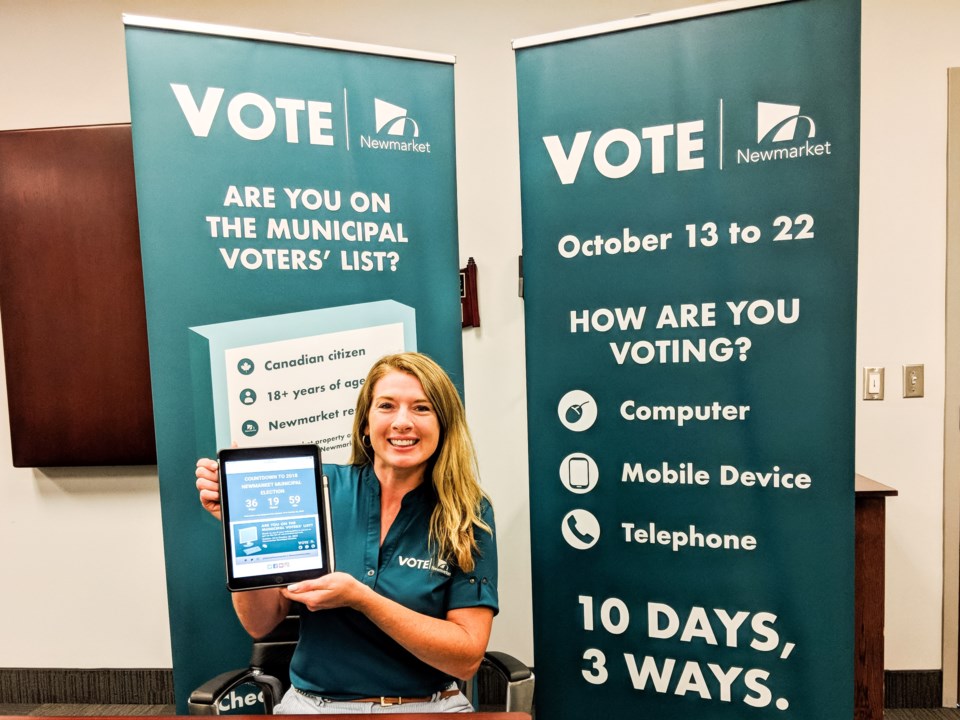 Guess what, Newmarket? A strong majority of local residents who voted online for the first time in the October 2018 municipal election reported they are “very satisfied” with the experience, a new survey shows.

What’s more, Newmarket’s younger voters aged 18 to 34 appear to buck a trend in reporting they are more satisfied with the online voting experience than their peers in other Ontario municipalities, a leading expert on electoral modernization says.

“This is a great finding that I’ve never seen before,” said Dr. Nicole Goodman, an assistant professor of political science at Brock University and director of the Centre for eDemocracy, who is the lead researcher of the 2018 Internet Voting Study (IVS).

The IVS is the largest survey of its kind so far in Canada that aims to better understand how electors feel about voting technology, and its impact on improving voter turnout, convenience and accessibility. Newmarket was one of 31 Ontario municipalities that participated.

Goodman delivered a presentation to a special committee of the whole meeting May 14 on the Newmarket-specific results of the survey, about which more than 7,000 people, or 39 per cent of the 17,871 people who cast their ballots electronically, voluntarily completed. It was the highest response rate of the entire 31 municipalities that participated.

“What’s striking about the findings here is typically we see somewhat strong satisfaction with online voting among all age groups but, often times, it’s middle-aged voters who are most satisfied,” Goodman said. “It’s typically not young people who are the main users of online voting, contrary to popular opinion. Research shows that young people prefer to vote by paper because it’s a rite of passage, it’s one of their first experiences.”

Goodman also busted some other myths about online voting, such as it leads to lower voter turnout and that older voters won’t use online voting.

However, voters 65 and over are the least likely to report being satisfied overall with online voting, as was the case in Newmarket.

On the subject of voter turnout in Newmarket’s 2018 election (35 per cent), which saw a two-per cent dip over the 2014 election (37 per cent), but one per cent higher than 2010, Goodman cautioned council not to overreact.

Goodman has been studying and leading projects that examine the implementation of technology in elections for more than a decade. She said her research, and that of others studying the subject, shows that elections are “highly contextual in terms of voter participation”.

“I don’t want anybody to be premature and say online voting does not increase turnout,” said Goodman. “A number of factors affect turnout, for example, if there is a competitive mayoral race. We know if competitiveness is a factor, it drives up turnout. As well, if there are issues that fire people up, that gets them out to vote.”

Here are some highlights of Newmarket voters’ views about their experience voting online:

CANADA: Black reading lists are being widely shared, but what’s it like trying to find books for children?
Jul 12, 2020 8:55 PM

Heat wave reminds us of the importance of trees, shade
Jul 12, 2020 5:25 PM
Comments
We welcome your feedback and encourage you to share your thoughts. We ask that you be respectful of others and their points of view, refrain from personal attacks and stay on topic. To learn about our commenting policies and how we moderate, please read our Community Guidelines.