'Conversation about short-term rentals fair, but conversation long overdue about stronger gun control in Canada'
Oct 9, 2019 11:40 AM By: Kim Champion 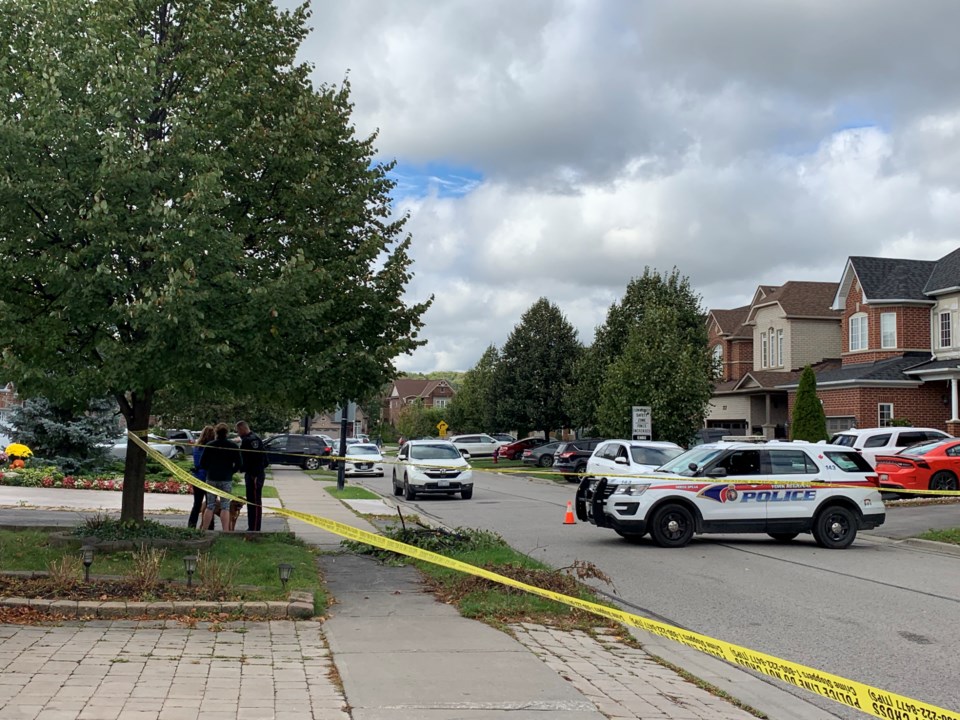 The Oct. 4 targeted shooting outside an Airbnb rental home in Newmarket’s Sawmill Valley neighbourhood is, “by far, a more guns and crime issue than a short-term rental issue”, Mayor John Taylor told NewmarketToday.

York Regional Police on Tuesday released a photo of the dark-coloured, four-door sedan it alleges was driven by two male suspects who opened fire Friday night in the driveway at 791 Colter St., killing 26-year-old Toronto man DeShane Taylor, and wounding a 23-year-old female, who were both sitting in their vehicle.

“This is not supposed to happen in our little neighbourhood,” said Tony Fitzpatrick. “(It’s) so upsetting and so disturbing. The gunshots were heard by many.”

A neighbour, Cliff, who lives directly across from the Colter Street rental, and with whom NewmarketToday spoke on Saturday, said he “heard the last couple of shots and then a lot of screaming and yelling”.

He hasn't had any concerns about the Airbnb property before this incident. But others in the neighbourhood have complained to the Town of Newmarket.

“What they’ve just experienced is horrendous and I don’t blame them for being very concerned,” Taylor said. “It’s tragic when anybody is killed in that way, especially in a community and in such a violent way like that. I don’t imagine that the neighbourhood and community aren’t disturbed and concerned. It’s a very disturbing thing to happen in the town and in that neighbourhood, and we are taking this very seriously.”

The gun violence recently witnessed in Newmarket mirrors some concerns that have come up on the local federal election campaign trail.

Senior students at Newmarket’s private school Pickering College, for instance, asked candidates from the four main parties what they think about Canada’s current gun controls and what should be done about them.

The students also wanted to know what types of new laws the candidates’ parties would implement to stop gun-related crime.

“It is the gangs that we’re seeing in Toronto, particularly, and in other urban centres,” Brown told the grade 10 to 12 students. “We need to stop illegal guns from coming across our borders. We need to stop the manufacturing of illegal guns. And we need real law taking place in our judicial system and give them the tools that they need to solve the problems at the judicial level.”

“I believe that we should be banning handguns because they turn dangerous into deadly situations and we can’t afford to have that happen,” Van Bynen said. “In my view, if you have a handgun, you’re done.”

“There are people who are responsible, but research and statistics tell us that when we reduce the number of handguns, the number of deaths by handgun incidents goes down,” Kelly said.

Bauer also warned about the lax gun control in the United States, and said, “There’s a mass murder every day in the U.S., and we want to avoid all those situations.”

As the overall crime rate continues to creep up in York Region and Newmarket, weapons violations in the first half of 2019 are down by just under 8 per cent, according to a York Regional Police report.

There were 260 weapons violations reported in the first six months of 2019, compared to 279 during the corresponding period in 2018, the report states.

But other recent fatal shootings in York Region at short-term rental properties have heightened awareness over the so-called “party palaces” as the town looks to regulate that booming industry here.

There were 150 short-term rentals listed Wednesday in Newmarket and vicinity at the Airbnb website.

For about the last six months, the town has been considering rules it could put in place on Airbnb-type short-term rentals, Taylor said. Newmarket is part of a short-term rental accommodation working group with neighbouring municipalities, including Markham and the Region of York.

“We’re going to look at all kinds of policies and policy options, and we will have public consultations before the end of the year,” Taylor said.

In September, town officials met with Airbnb representatives to discuss best practices and options to consider in regulating short-term rentals.

“There’s quite a high use of short-term rentals around the hospital area, and there are people who are relying on this service to see their loved ones who are in the hospital,” Taylor said, adding he knows someone who was renting a part of their home on Airbnb to supplement their income while battling cancer and not being able to work.

“We are going to take some time to examine short-term rentals and the role they play in the community, and how to ensure we’re regulating them the best we can within our jurisdiction so they’re not disrupting our neighbourhoods and that they’re safe,” he said.

For instance, Taylor said one of the key questions around short-term rental regulations is who may be permitted to rent out space.

The town will seek residents' feedback on whether homes that are an owner’s primary residence can be rented out short-term.

“I’m very interested in the concept of looking at this from that point of view, but having a house that you don’t occupy, that’s where we’re getting into the problem of disturbing neighbourhoods, or the situation we just had with a violent crime,” Taylor said.

~With files from Debora Kelly

Book Time: 6 books to celebrate Halloween
Oct 25, 2020 2:30 PM
Comments
We welcome your feedback and encourage you to share your thoughts. We ask that you be respectful of others and their points of view, refrain from personal attacks and stay on topic. To learn about our commenting policies and how we moderate, please read our Community Guidelines.