Is Newmarket-Aurora the Wild West of federal election signs? 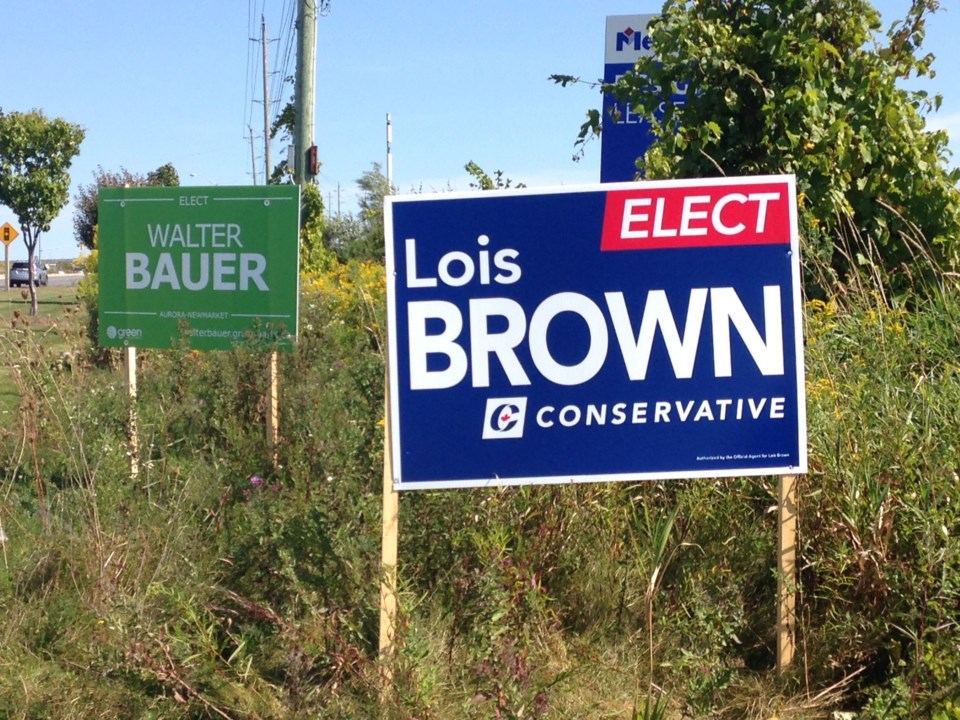 Federal Newmarket-Aurora Green Party candidate Walter Bauer joined Conservative candidate Lois Brown in putting up an election sign on a regional road when he noted the signs had not been removed days after York Region issued an edict that the signs are illegal until 10 a.m. Sept. 23. Supplied photo/Walter Bauer

The Newmarket-Aurora NDP riding association today stepped up its call for action on removing federal election signs that violate York Region’s sign bylaw, and also for slapping wayward candidates with the fines that go along with those infractions.

In a Sept. 20, 2019 emailed letter to the town clerks of Newmarket and Aurora, and copied to York Region’s regional clerk, Christopher Raynor, president Jon Aston said that “for nine days and counting, (Conservative candidate Lois) Brown’s scofflaw campaign has resulted in an obvious, significant, unfair advantage over campaigns which, by contrast, have only demonstrated respect for municipal bylaws”.

Both the local Liberal and NDP campaigns have said they will not put up election signs until legally allowed to do so at 10 a.m. Monday, Sept. 23, in accordance with the Regional Municipality of York’s bylaw that regulates signs on regional roads, including Bayview Avenue, Leslie Street, Yonge Street, Bathurst Street, and others.

Newmarket-Aurora Green Party candidate Walter Bauer said he tried repeatedly to get clarification from the region about when he could put up his election signs. But when he got no response, and observed that the local Conservative campaign signs still remained on regional roads, he decided to put up a few of his own late this week.

“These Conservative signs should either be removed immediately or the other parties should be given permission to place our signs,” Bauer wrote to the region in frustration about his concerns not being addressed.

Aston, meanwhile, is asking the town clerks to hold “Ms Brown’s campaign accountable to the fullest extent of the law”.

With regard to sign removal, Aston is calling for every illegally installed sign to be identified, removed and stored until after voting day Oct. 21.

“The public record should show that each and every sign is accounted for, and Ms Brown’s campaign can provide you with a list of sign locations. A simple count and photograph of collected signs in storage would suffice,” he said.

“Full accountability demands that, at minimum, fines should be levied for all administrative and operational costs related to sign removal and storage, up to the maximum amount allowable,” he wrote. “If there is any discretionary decision remaining, let it be determined by the degree to which Ms Brown’s campaign cooperates with your office.”

After complaints surfaced earlier this week from opposing campaigns about Conservative candidate Lois Brown’s election signs going up the day after the writ was issued for the 43rd general election on Sept. 11, regional clerk Raynor emailed a reminder on Sept. 18 to all federal candidates about the ground rules on signs during a federal election.

In that communication, Raynor said “election signs will be permitted only from 10 a.m. on the 28th day before election day and ending 72 hours following the close of polls; for this fall’s federal election, signs are permitted beginning 10 a.m. on Monday, Sept. 23, 2019”.

He noted that any signs installed contrary to the bylaw and that York Region staff remove for non-compliance will be held until after election day, and available for pickup at no cost.

The region’s immediate concern is addressing signs that are affecting sightlines at intersections and possible safety concerns, a spokesperson confirmed. The emailed notification to candidates is meant to help address the balance of illegally placed election signs.

Raynor explained that the region’s Signs on Regional Roads Bylaw, enacted in 2015, is in accordance with the “current state of the law pertaining to the regulation of signs on public highways”.

Just two days prior to the regional clerk’s email to all candidates, the region, itself, received a letter from an attorney with the Conservative Party of Canada (CPC) that warned that its sign bylaw restricting when federal election signs can be put up violates the Canadian Charter of Rights and Freedoms.

Lawyer Arthur Hamilton, a partner at Cassels Brock law firm, cited the Ontario Superior Court of Justice challenge, Shurman vs City of Vaughan, 2007, 89 O.R. (3d) 312, that led to a decision that municipal election sign restrictions are at variance with the law.

“Neither the CPC nor our nominated candidates will accept or condone any interference with election signs their campaigns place — any such interference will constitute an infringement of our candidates’ constitutionally protected right to freedom of expression,” Hamilton said, noting that other municipalities have already been put on notice.

“In respect of your municipality’s stated intention to enforce your bylaw during the current writ period, please be advised that any actions taken by the Council, your employees or agents will also constitute a violation of section 325 of the Canada Elections Act,” said Hamilton. “Such a violation is an offence pursuant to section 495(2)(b) of the Act. We have copied the commissioner of Elections Canada with this correspondence to alert his office that these violations by your municipality are imminent.”

When reached on Sept. 17 about the election sign complaints, Brown’s campaign manager, Peter Seemann, said that for the last two federal election cycles local campaigns have put up their signs the day after the writ was issued, and were not asked to take them down.

“In all jurisdictions across the country, federal election signs can be put up the day following the writ, the Canada Elections Act clearly states that,” he said. “If any of our signs are put up illegally with respect to distance to corners, or on streets where they’re not permitted, we will take them down, we’re very careful not to do that.”

Seemann said he shared a letter from the CPC’s legal counsel with the region that is of the view that under “the Canada Elections Act, federal elections supercede municipal bylaws with respect to when signs can go up”.

Seemann has not since returned calls or emails from NewmarketToday.

A Town of Aurora spokesperson said today that York Region will enforce the sign bylaw. Its own election sign bylaw applies to municipal, federal, and provincial elections and restricts signs going up until the 28th day before voting day, which mirrors York Region's election sign restrictions on timing.

Newmarket-Aurora Conservative candidate accused of defying election sign rules
Sep 17, 2019 1:45 PM
Comments
We welcome your feedback and encourage you to share your thoughts on this story. We ask that you be respectful of others and their points of view, refrain from personal attacks and stay on topic. To learn about our commenting policies and how we moderate, please read our Community Guidelines.