Newmarket-Aurora Liberal and NDP candidates are calling on Lois Brown to join them in talking about their parties' platform on 'the most pressing issue of our time'
0
Sep 26, 2019 3:56 PM By: Kim Champion 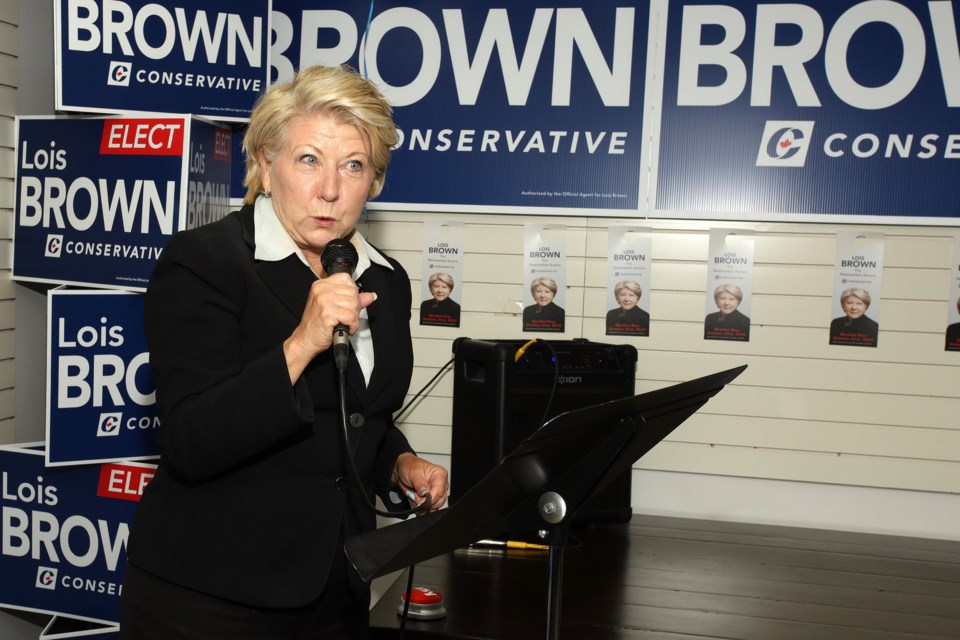 In an emailed note sent to organizers about four hours before the start of tonight’s all-candidates election forum at Old Town Hall, federal Conservative candidate Lois Brown’s campaign manager, Peter Seemann, said Brown will not be attending due to a scheduling conflict with a “long-standing event”.

One of the event’s organizers, Teresa Porter, expressed disappointment at Brown’s decision.

“If Lois Brown wishes to represent the people in Newmarket-Aurora, it is hard to understand why she would not wish to take part in an open forum to explain her platform, and take questions from the people in attendance,” Porter said. “The reason given is that she has another “long-standing” event scheduled for tonight. Her invitation to the Forum was sent to Peter Seemann on Aug. 22. Since then, despite my follow-ups, I have heard nothing from her campaign, so it is clear to me that she had no intention of attending.”

Newmarket-Aurora voters will know at noon today if Conservative candidate Lois Brown will participate in tonight’s all-candidates election forum at the Old Town Hall from 7 to 9 p.m.

Brown is the only one of five federal candidates who has not yet confirmed or declined an invitation by organizers to attend the Sept. 26 free public forum and answer questions posed by a panel on the parties’ climate change plans.

Local voters will also have a chance to submit written questions on any election issue, which could be selected to be answered by the candidates.

Brown’s campaign manager, Peter Seemann, this morning told NewmarketToday that Brown has had “a long-standing commitment” booked on the evening of Sept. 26.

When asked what that commitment was, Seemann said he couldn’t disclose the details, and added “it’s an event related to the campaign but it’s not a public event”.

“Unfortunately, Lois can’t make it,” Seemann said. “We were trying to make it work, but it looks like we can’t do it. She will be attending the (Newmarket and Aurora) chamber debates and another one at Pickering College.”

Seemann also said he was meeting with Brown today after her morning meetings and would let the event organizers know one way or the other around noon whether or not Brown is able to participate.

“We've heard nothing so far, but she has been invited, and I really do hope she doesn't miss this opportunity to talk about why she is running, and to take questions from the general public,” Porter said. “We have put a lot of effort and considerable expense into making this available so that people will have a chance to hear directly from the candidates in a free, open forum.”

Meanwhile, the local Liberal and NDP campaigns issued a joint statement Sept. 24 calling on Brown to participate in the all-candidates' forum.

"We call on Lois Brown, Conservative Party of Canada candidate for Newmarket Aurora, to attend the Newmarket-Aurora Drawdown-KAIROS York Region All Candidates Forum. Climate change is the most pressing issue of our time, and residents of Newmarket-Aurora deserve the opportunity to hear Ms Brown speak to her party's climate plan,” the statement said.

“The Liberal Party of Canada and the New Democratic Party recognize the importance of immediate action to address the climate emergency. We hope that Ms Brown agrees, and will accept the organizers' invitation to attend the Forum on Sept. 26."

The federal all-candidates’ forum is tonight, Thursday, Sept. 26, from 7 to 9 p.m. at the Old Town Hall Auditorium, 460 Botsford St., Newmarket.

Each candidate will make his or her respective platform presentations, and will then be asked to respond to three prepared questions related to climate change and social/global justice.

In the second hour, questions from the audience will be presented by members of the panel, with each candidate given an equal amount of time to respond.

Those questions are expected to be about the main issues concerning voters in this election.

There will an opportunity to meet with the candidates after the event in the main lobby.

Check back here for updates.

YMCA and Food Bank team up to handle influx of donations
May 26, 2020 4:00 PM
Comments
We welcome your feedback and encourage you to share your thoughts. We ask that you be respectful of others and their points of view, refrain from personal attacks and stay on topic. To learn about our commenting policies and how we moderate, please read our Community Guidelines.