Knives were found in the backpack of the man who was later arrested after pushing his way into Stonehaven Elementary School
Jan 16, 2020 4:02 PM By: Kim Champion 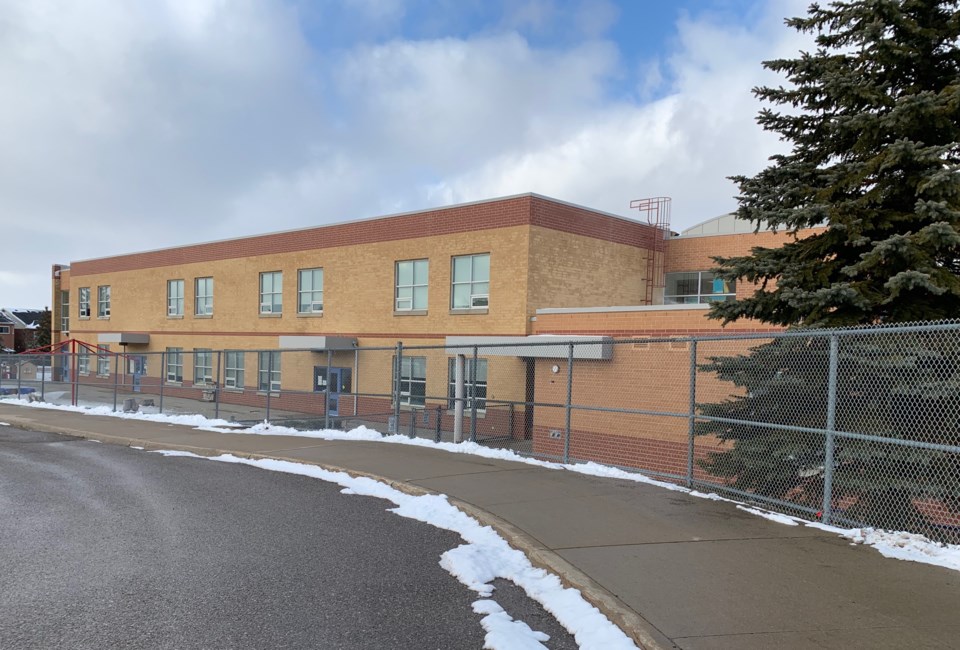 A man with knives in his backpack was later arrested after pushing his way into Stonehaven Elementary School last week. Debora Kelly/NewmarketToday

Some parents at Newmarket’s Stonehaven Elementary School are up in arms over what they say is the administrators’ failure to issue a lockdown after a man pushed his way into the building and wandered around looking for a former teacher.

The incident highlights the need for a review of safety measures, a parent advocate says.

According to the police report that the school shared with parents in a Jan. 13 email, the man was located walking eastbound on Stonehaven Avenue and was found to be in possession of two knives.

An investigation revealed that the man was wanted on a warrant for failing to appear in court on an unrelated matter. York police records show the man was arrested last Wednesday for criminal harassment.

“It’s terrifying and we don’t know what the status of this man is, but the fact he was able to enter the school and walk around while it is full of students is why we’re absolutely enraged that a lockdown wasn’t called,” said an active parent volunteer who wishes her name to remain private for safety reasons. “It’s incidents like this that these security procedures are put in place in the first place.”

Concerned parents say the man was observed by the school principal last Wednesday on the security camera. The principal met the man outside the front doors but the man pushed his way into the school.

The man then proceeded to roam around the halls, went up to the second floor, and out back to where the three portables are, all of which he opened the doors to look inside, parents say.

School administrators shadowed the man the whole time, and staff were asked to call police.

“The principal said his gut told him it wasn’t necessary to go into a lockdown, and that he didn’t want to escalate the issue with the man,” the parent said. “He said he was trying to keep the situation under control. But it turned out the man had knives in his backpack and was looking for a former teacher at the school. It doesn’t appear that his intentions were good.”

Some parents have asked the school to hold a town hall on the issue, but administrators have so far declined, they say.

“It’s our opinion that when somebody pushes past you and deliberately defies what you have instructed them not to do, that becomes a security risk,” the parent said. “We feel if the man was told not to come in and he came in anyway, a lockdown should have been issued at that point.”

Newmarket parent advocate Shameela Shakeel, who is also a former chairperson of Stonehaven’s parent council, agrees the principal made an incorrect judgment call because he couldn’t possibly have known if the intruder was armed or not.

“In this day and age, you just cannot be too careful when you have 650 students and 50-plus staff in the building and you have a volatile intruder in the school,” she said. “I feel like if our kids were in an unsafe situation, yes he made a judgment call, but it should have been to have a lockdown, or at a minimum have an announcement for all teachers to lock the doors of all classrooms.”

The Stonehaven safety incident has prompted a call to action to the York public board.

“I want our school, in particular, and our school board, to use this as a learning experience with what safety measures and protocols need to be in place for the safety of our students and staff,” Shakeel said, adding that several lunchtime supervisors at the school told her this week they felt unprepared to deal with an armed intruder.

Shakeel acknowledges that a lockdown can be scary and stressful for children as it involves them hiding in certain spots or underneath desks, but the school board should consider instituting a new, intermediate measure between a full lockdown and a hold-and-secure.

The York Region District School Board defended its security policies, and said school principals can make their own judgment call about whether or not to issue a lockdown.

“Principals can make their own call and at no point would any of our principals or schools hesitate to call a hold-and-secure or a lockdown if there was any perception of a threat,” board spokesperson Licinio Miguelo said.

“The administrators in this case did what they were supposed to do,” he added. “This person was followed and shadowed at all times, they contacted the police, and they took all the actions that were necessary. If, at any point, this person had done something to make it look like there was a threat, they would have called a lockdown without hesitation.”

Miguelo said his understanding of what occurred is that an individual came into the school, was noticed immediately by the principal and vice-principal, and they immediately called York Regional Police. The pair shadowed him for the entire time he was in the building and at no point did he present a threat when he was in the building, Miguelo said.

The York public board has policies and procedures in place to handle a threat or a perceived threat inside or outside its schools, including:

A school emergency response to the presence or suspected presence of an armed intruder or other similar violent threat within the school. When in lockdown, all students and staff members are behind locked doors, quiet, and out of sight as much as possible. Electronic devices may not be used. Exterior entry doors remain open to allow access for emergency response personnel.

A school response to an environmental incident outside of the school, including but not limited to a weather related incident, blackout, chemical spill, etc. During a shelter in place, students should be gathered in interior hallways or small rooms wherever possible, and lie face down in other locations. Doors remain unlocked. No one may leave the building during this event. Large central rooms, such as gymnasiums or libraries, may not be used during a shelter in place.

Editor's note: This story was updated at 4:45 p.m. to clarify parent roles at the school.