About 10 per cent of Central York Fire Services members are currently in self-isolation, as a precaution following travel, Chief Laing says
Mar 25, 2020 4:24 PM By: Kim Champion 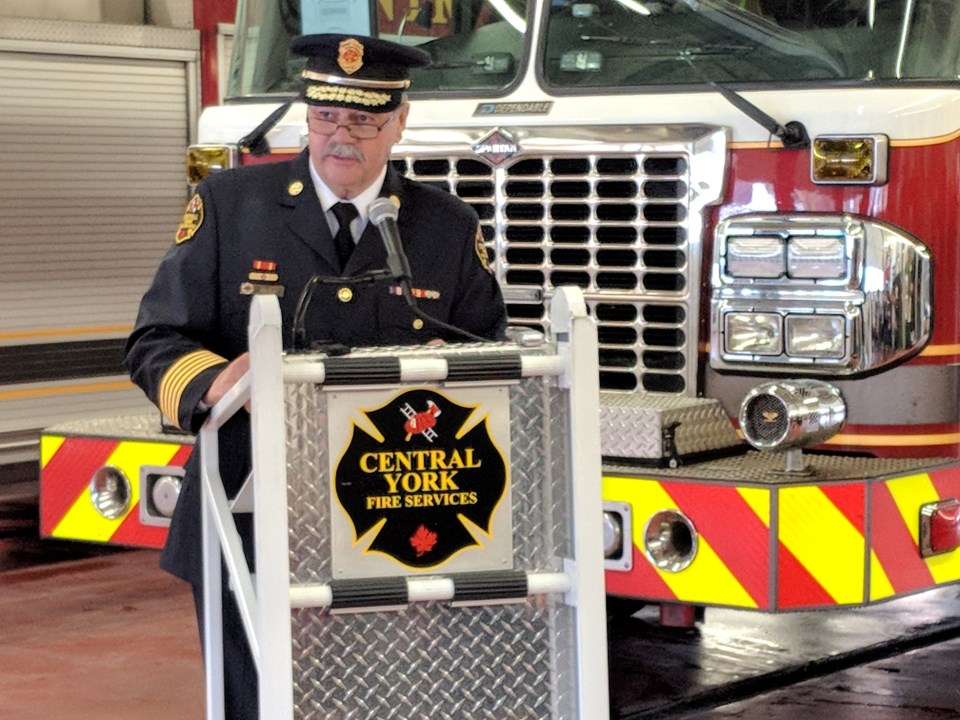 About 10 per cent of Central York Fire Services members are currently in self-isolation, but they are healthy and starting to return to work, fire chief Ian Laing said.

About 17 local firefighters went into self-isolation after travel and are observing the 14-day period to monitor themselves for symptoms of COVID-19.

“Well, to say it’s business as usual would be an understatement,” Laing said. “For the most part, our workforce who are self-isolating are starting to come back. Nobody is exhibiting symptoms, they are just abiding by the rules and they’ll be back. We quite confidently feel like we’re doing OK."

Laing said the staff absences are no different now than during the prime vacation season of summer, and there is no significant difference in its staffing levels.

“All fire services in the region agreed that due to our working conditions, we didn’t want to expose those that were at work and hadn’t travelled to those who might be inadvertently carrying the virus,” he said. “It’s my understanding that with the virus, you can be contagious for a week before you exhibit any symptoms, so that’s what makes it so dangerous for us to put people in a close working environment.”

Laing is the regional fire coordinator and has been speaking daily with the various fire chiefs in York Region to discuss any pandemic-related issues that arise and to share resources, if need be.

At that time, there were 22 confirmed COVID-19 cases in York Region, including two cases in Newmarket.

As of this morning, York Region public health confirmed there are 97 cases in the region, including evidence that the virus is being transmitted locally, not from travel or close contacts of those infected as was the case in the beginning, and eight of those cases are health-care workers on the front line.

The coronavirus pandemic that is escalating quickly in the community has changed the way Newmarket and Aurora firefighters respond to certain calls, such as medical, Laing said.

New protocols in place to limit firefighters’ exposure to the virus include when arriving at a medical call and the ambulance is already there, one Central York Fire Services crew member makes contact from a distance with the EMS crew to see if they need assistance.

If firefighters arrive at a medical call first, two crew members go in to communicate with the patient from a safe distance.

“If they have to undertake a medical intervention like protecting the airway or initiating a pulse check or chest compressions, we undertake that as usual prior to the EMS arriving,” Laing said.

“I think everybody says their medical response calls are slightly down from what they normally would be. Everything else seems to be on a level keel,” he said.

Laing said obtaining N95 respirator face masks was a concern for all York Region’s fire services when responding to medical calls as global demand dried up the supply.

“We’ve been lucky and our partners at the Town of Newmarket sourced them for us, and we fit-tested all employees with them,” Laing said. “We have two back-up versions. There is word that the Health Ministry will announce that first responders can wear a surgical mask instead of an N95 and it offers adequate protection for what we’re doing.”

In addition, 911 operators at the Central Ambulance Communications Centre are screening all calls, where possible, with a coronavirus questionnaire that asks about such things as travel and fever.

Laing wishes to remind the public that 911 is for emergencies only.

“Calling 911 and asking for a ride to the hospital because you can’t get a taxi is not what the system is designed to do,” he said. “It helps everyone, those that are in need, especially, and it helps the service, too."

For more information on COVID-19, visit any of the following dedicated websites: