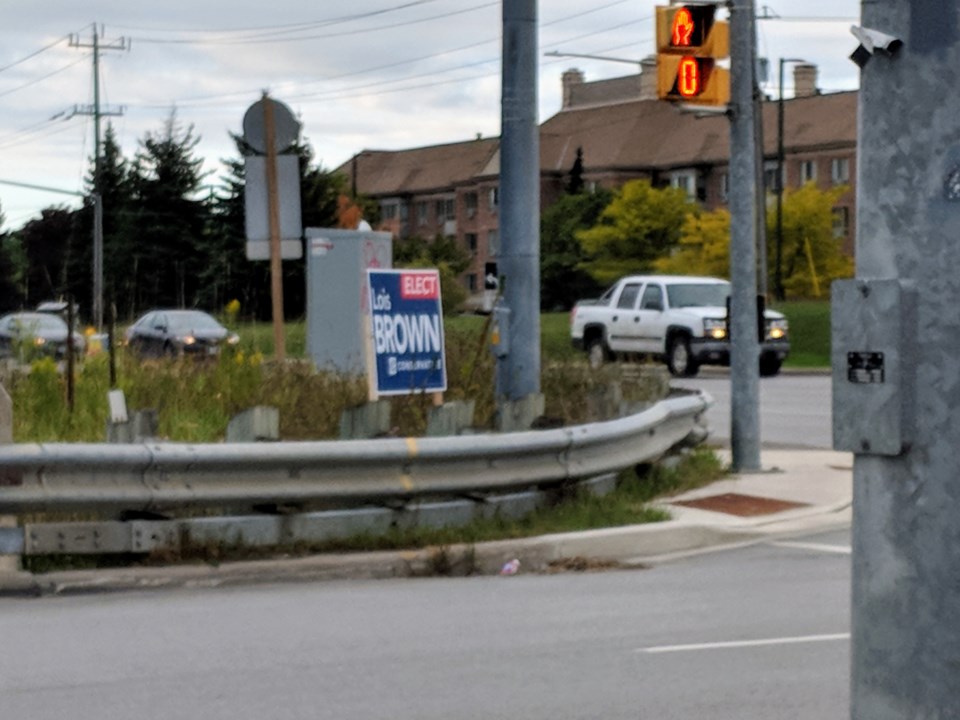 Political challengers say federal Conservative candidate Lois Brown's campaign has violated York Region's election sign bylaw. This campaign sign is at the corner of Bayview Avenue and St. John's Sideroad, a regional road intersection that only permits election signs to go up on Sept. 23 at 10 a.m., according to its sign bylaw. Kim Champion/NewmarketToday

In a Sept. 16, 2019 open letter to all municipalities and regional governments obtained by NewmarketToday, Conservative Party of Canada (CPC) lawyer Arthur Hamilton, a partner in the Cassels Brock law firm, addressed what he calls local bylaw interference with the federal election.

“We are advised certain municipalities intend to attempt to enforce bylaws purporting to prohibit the posting of election signs for several days during the 2019 federal general election,” Hamilton said. “Many municipalities have already been put on notice that such bylaws violate the Canadian Charter of Rights and Freedoms. ...Neither the CPC nor our nominated candidates will accept or condone any interference with election signs their campaigns place — any such interference will constitute an infringement of our candidates’ constitutionally protected right to freedom of expression.”

Hamilton indicated he was enclosing a copy of Shurman vs City of Vaughan, 2007, 89 O.R. (3d) 312, an Ontario Superior Court of Justice challenge that led to a decision that municipal election sign restrictions are at variance with the law.

“In respect of your municipality’s stated intention to enforce your bylaw during the current writ period, please be advised that any actions taken by the Council, your employees or agents will also constitute a violation of section 325 of the Canada Elections Act,” said Hamilton. “Such a violation is an offence pursuant to section 495(2)(b) of the Act. We have copied the commissioner of Elections Canada with this correspondence to alert his office that these violations by your municipality are imminent.”

Meanwhile, members of the local Liberal and NDP camps are crying foul over what they say is a disregard of York Region’s rules that only permit election signs on regional roads 28 days prior to voting day which, in the case of this year’s Oct. 21 federal election, means that Sept. 23 at 10 a.m. is the first day campaign volunteers can bang signs into the ground.

Brown’s election signs began popping up at regional road intersections on Sept. 12, the day after the writ was issued, signalling the start of Canada’s 43rd general election.

"It's disappointing that the Conservative campaign is deciding to ignore regional and municipal bylaws that are meant to apply to everyone,” Liberal campaign spokesperson Cameron McNeill said. “We intend to run our campaign in accordance with the rules, and we hope that Ms Brown's campaign will decide to do the same.”

York Region’s sign bylaw treats all election signs the same, and its rules, regulations and penalties apply during federal, provincial and municipal elections. There are no exceptions.

The regional government defines “election signs” and “signs” differently, the latter meaning any device for the purpose of direction, information, identification, advertisement, or business promotion. There are exceptions to the “sign” rules, but they do not apply to “election signs”.

As far as provincial NDP riding association president Jon Aston is concerned, “The right thing for municipalities to do now is to enforce their bylaws.

“Otherwise, they are complicit in giving Conservatives an unfair advantage.”

Brown’s campaign manager, Peter Seemann, said the campaign team has done its homework and, as far as it knows, there has been no violation of election sign rules.

“We got a call from the Region of York and we shared a letter from our legal counsel and, under the Canada Elections Act, federal elections supercede municipal bylaws with respect to when signs can go up,” Seemann said. “If York Region comes back and counters that, then we’ll deal with it accordingly.”

Seemann said that for the last two federal election cycles, the local Conservative campaigns have put up their election signs the day after the writ was issued, and were not asked to take down any signs.

“In all jurisdictions across the country federal election signs can be put up the day following the writ, the Canada Elections Act clearly states that,” he said. “If any of our signs are put up illegally with respect to distance to corners, or on streets where they’re not permitted, we will take them down, we’re very careful not to do that.”

The Regional Municipality of York did not respond to a request for comment before publication.

According to the Elections Canada website, the Canada Elections Act does not regulate or prohibit election signs outside a federal election period. Rather, it states that provincial or municipal laws may regulate the signs placed on public or private property before or during an election period.

For more information on federal election sign rules, including how to make a complaint, visit here.