PHOENIX — In Joe Biden’s pursuit of the Democratic presidential nomination, he’s run repeatedly into a wall in the West, where Bernie Sanders’ strength among Latinos propelled his campaign even as he struggled with other groups.
Mar 16, 2020 6:16 AM By: Canadian Press 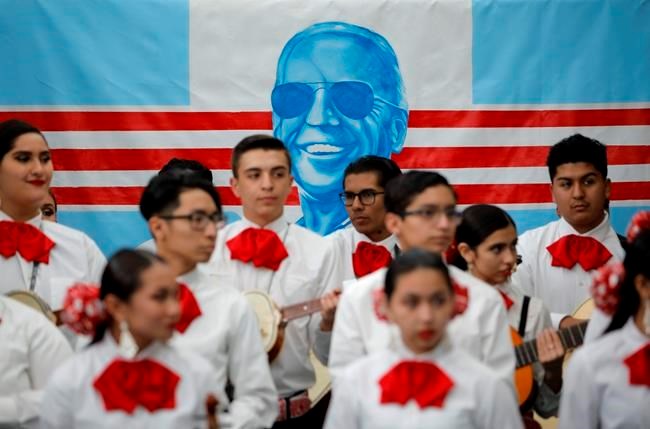 PHOENIX — In Joe Biden’s pursuit of the Democratic presidential nomination, he’s run repeatedly into a wall in the West, where Bernie Sanders’ strength among Latinos propelled his campaign even as he struggled with other groups.

Tuesday’s primaries in Arizona and Florida offer Biden a chance to show he can make up ground with Latinos, a crucial group of voters he’ll need in his corner to defeat President Donald Trump.

Biden is playing catch-up when it comes to engaging Latino voters and is weighed down by anger over the high rate of deportations during the Obama administration, which left scars for many immigrants and their families.

“We need more. And we need commitments as we move into the general,” said Regina Romero, a Democrat who recently took office as Tucson’s first Latina mayor. Biden can win over reluctant Latinos with a bold and progressive stance on immigration, she said.

“I hope that he doesn’t eat up the lie that he has to be more conservative on the immigration issue,” said Romero, who hasn’t endorsed Biden or Sanders since her candidate, Elizabeth Warren, dropped out. “We shouldn’t be afraid of an issue that is so important for Latino voters, water it down and not have policies that Latinos can get excited about."

Arizona and Florida are both likely to be battlegrounds in November. In Arizona, 1 in 3 residents is Latino; in Florida, it's 1 in 4.

Sanders' strength with Latinos helped him to an overwhelming victory in the Nevada caucuses and contributed to his Super Tuesday wins in California and Colorado on a night when Biden built a formidable lead in delegates.

But Biden's success is a recent phenomenon. His slow start amid a crowded Democratic field left him with a shoestring budget and virtually no campaign infrastructure beyond the early states, which limited his ability to reach out to Latinos on the ground or air Spanish-language television ads. That’s changed now that his burst of success since South Carolina made him the overwhelming for the nomination and helped his fundraising.

“He definitely needs to work it, and he needs to up his game and engage with Latino voters,” said Janet Murguía, president and CEO of UnidosUS, the Latino advocacy group formerly known as National Council of La Raza. Tuesday could make for “a big reset” for Biden, she said.

Biden has had to answer for the big spike in deportations during Barack Obama’s presidency, when Biden served as .

Early in his administration, Obama aggressively increased efforts to deport immigrants living in the country illegally. He’d hoped to convince members of Congress and the public that he was serious about border security in order to secure a comprehensive immigration reform bill that would extend legal status to millions of people living in the U.S. without authorization. The reform bill never passed, but the deportations disrupted families, drove fear in immigrant communities and left deep wounds.

Any Democrat's immigration policies would be superior to Trump's, but that won’t be enough to excite Latinos, said Tomás Robles, co-director of Living United for Change in Arizona, or LUCHA, a Latino organizing group that has endorsed Sanders.

“You cannot depend on people's hatred or fear of Trump to inspire them to turn out in droves for Biden,” Robles said. “Bernie has worked hard to motivate Latinos as a base. But the entire establishment part has failed at doing the same.”

The Obama administration deported more than 3 million people during his eight-year tenure, especially in the early years before Obama gave up on Congress and changed course, using executive orders to extend temporary legal protections to young immigrants and their parents through programs known as Deferred Action for Childhood Arrivals, or DACA, and Deferred Action for Parents of Americans and Lawful Permanent Residents, or DAPA.

Biden and his allies focus on the later years of the Obama administration.

U.S. Rep. Ruben Gallego, who represents largely Latino areas of Phoenix and endorsed Biden this month, predicted that Latino voters will come around. But he said Biden could help himself by talking up his own progressive proposals, such as a $15 minimum wage and a public option for health insurance. He should also talk about the Obama health care law that extended coverage to millions of Americans, including a disproportionate number of Latinos, Gallego said.

While Arizona Latinos are frustrated with the Obama-era deportations, Gallego said, they also remember that the administration sued to block the state’s anti-illegal immigration bill known as SB1070, sued Sheriff Joe Arpaio for racial profiling and enacted DACA.

“Even those voters who aren't supporting Biden right now, I think they still have positive feelings toward him and at the end of the day will be very supportive in the general,” Gallego said.

Biden’s defenders also point to Sanders’ work to help kill a 2007 immigration bill, which Sanders warned would drive down wages.

“No one's perfect, but let’s not forget that he made a fatal mistake by doing that,” Gallego said.

Latinos in the West, where Sanders has done so well, are mainly of Mexican and Central American descent. It’s a different story in Florida, where Cubans and Puerto Ricans predominate, making the state a potential bright spot for Biden. Sanders’ self-identity as a democratic socialist and his recent of certain aspects of Cuban dictator Fidel Castro’s regime are a liability with Cuban voters.

“Miami is a melting pot for people from all over,” said José Javier Rodríguez, a Democratic state senator from Miami who was an early Biden supporter. “Biden's appeal hits a cross-section in ways that Sen. Sanders does not.”

Biden’s campaign is upping its Latino organizing in Arizona through its “Todos con Biden” or “Everyone with Biden” program, including Spanish-language phone banks and door-to-door outreach. In Florida, Biden’s Spanish-language ads use a Cuban narrator in Miami, a Puerto Rican in Orlando and a Mexican in Fort Myers to reflect the backgrounds of Latinos in each area.

Biden will need that outreach in a matchup against Trump. In Arizona, the growth of Latinos combined with Trump's weaknesses in the suburbs have turned a solidly red state into a battleground. And for the president, there's virtually no path to reelection without winning Florida and its trove of electoral votes.

The Latino vote, he said, “is no longer the sleeping giant. It just needed a little attention and a little love and it will show up.”

Catch up on the 2020 election campaign with AP experts on our weekly politics podcast, “Ground Game.”

Belarus president sworn in at unannounced inaugural ceremony
Sep 26, 2020 3:17 PM
Comments
We welcome your feedback and encourage you to share your thoughts. We ask that you be respectful of others and their points of view, refrain from personal attacks and stay on topic. To learn about our commenting policies and how we moderate, please read our Community Guidelines.