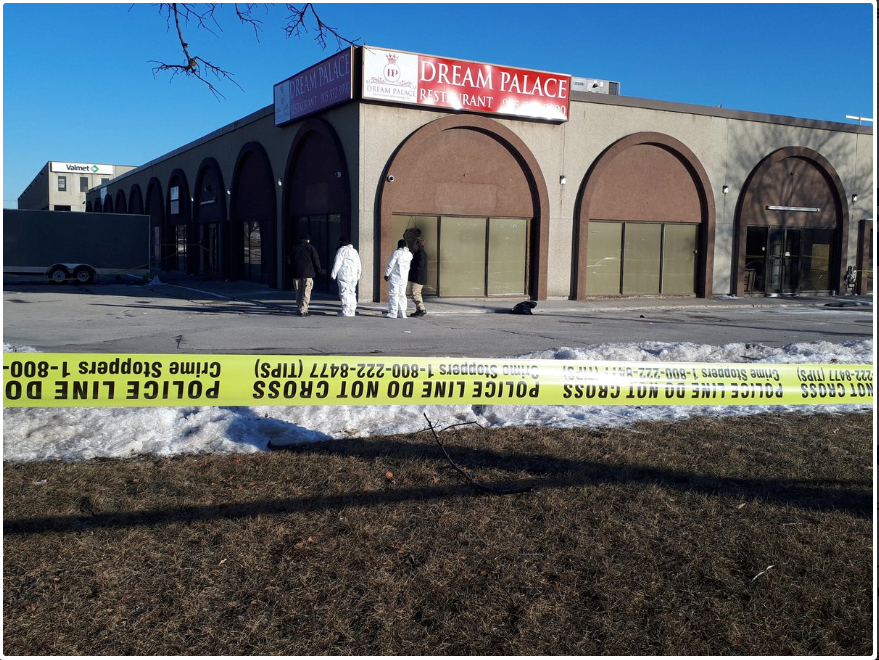 Police provided photo shows scene of double homicide on Saturday.
NEWS RELEASE
YORK REGIONAL POLICE SERVICE
*************************
Investigators with the York Regional Police Homicide Unit are releasing the name of one victim, advising that related arrests have been made and are continuing to seek witnesses following a double homicide in the City of Vaughan.

On Saturday, Jan. 26, 2019 at 4:15 a.m., York Regional Police received reports of a shooting that had occurred at a banquet hall located at 8131 Keele St., which is in the area of Keele Street and Rivermede Road. When officers arrived, they found one man deceased inside the banquet hall and another suffering from life-threatening injuries outside in the parking lot.

The 23-year-old man with life-threatening injuries was transported to hospital where sadly he succumbed to those injuries. He has since been identified as Devon Degoias, 23, from the City of Toronto.

The identity of the man that was deceased at the scene has not yet been confirmed.

With the assistance of Toronto Police Service, two men were arrested in the City of Toronto in possession of a firearm and drugs.

These men have been charged for those offences and are considered persons of interest in the double homicide. York Regional Police continue to investigate the connection between the Toronto Police Service incident and the murders that occurred in Vaughan.

The investigation has also revealed that in this incident, gun shots were fired both inside and outside of the banquet hall where a private party was taking place.

Any witnesses that may have seen or heard anything in the area are asked to contact police. Investigators are also appealing to any nearby businesses that may have video surveillance, or any drivers who may have been driving on Keele Street or Rivermede Road around the time of the incident with dashcam footage to please come forward.