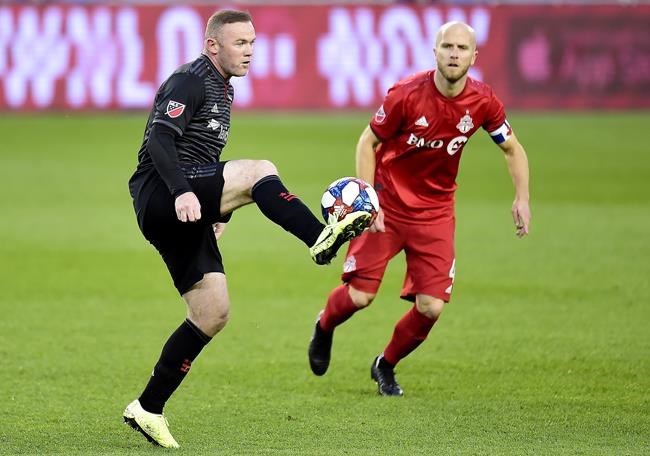 Toronto FC, no stranger to drama, opened training camp with a bang Monday.

Bradley was hurt at the Nov. 10 MLS Cup final in Seattle but finished the game and downplayed the injury, saying the right ankle might take two to three weeks "to calm down."

On Monday, that prognosis stretched to four months.

Adding to the drama was star striker Jozy Altidore, who tossed a medical grenade when he told reporters the Bradley injury had been mishandled by the MLS club.

"Make no mistake. In my opinion, for me, it was handled poorly," Altidore told reporters minutes after Curtis outlined the injury news. "This was an injury from two months ago and it's not the first time this has happened (at the club) ... For two months to have gone by and now he's having surgery and to be out 'til June."

"I don't think it's good enough," Altidore added. "He's a guy that takes care of himself in an incredible way, an incredible professional ... I think he was let down."

Coach Greg Vanney, his exasperation at Altidore's comments plain to see, was then left to clean up the mess.

Vanney, unfortunately, has firsthand experience of the injury, saying his daughter has suffered a similar issue from gymnastics.

He called it a "contact injury" affecting the area between the ankle and the tibia. And he said it's not easy to catch, with a specialist not seeing the severity of the injury from initial images.

"I understand that that this is not an easy find and an easy fix," Vanney said.

"It's an injury where you feel like you can pretty much do everything," he added. "But there's something that just tells you it's not right and there's a little bit of annoyance and a pain. So you can be at 95 per cent and feel like everything's good but that last five per cent just doesn't feel right.

"And the problem is that that last five per cent, you're not going to get over it and it's going to make things worse. Then you have to deal with it and that's what he's doing with it now."

Adding to the injury surprise is the fact Bradley is a workhorse who takes care of his body and is rarely sidelined.

It's not the first time Altidore, a designated player who made US$6.33 million last season, has taken a pop at the club. Last April he laid into Bill Manning after a game, saying the team president's ego was hurting player welfare by banning trainer Giuseppe Gueli because of his affiliation with the now-departed Sebastian Giovinco.

Altidore, who has been dogged by injury in his career, apologized soon after and Gueli returned to the club.

Bradley injured his ankle in the 32nd minute of the championship game when Seattle defender Roman Torres, attempting a shot, caught the Toronto player on the foot with his follow-through. Bradley subsequently withdrew from the U.S. squad for CONCACAF Nations League games against Canada and Cuba just days later.

He spent much of the off-season trying to rehab the ankle at the club's training facility.

Curtis, who called going under the knife "the last resort," put the recovery at approximately four months.

"In Michael's case, we are going to be careful and cautious about this," the GM told reporters. "But we're confident that, once he has the surgery, that he'll be able to return to play. It'll take probably approximately four months. Now that could be shorter or it could be lengthier depending on how we manage that process."

The MLS Cup final represented Bradley's 200th appearance for Toronto FC in all competitions. A month later the 32-year-old midfielder signed a new deal with Toronto that covers three years plus a club option.

Team officials will be looking to 21-year-old Canadian Liam Fraser to deputize for Bradley.

Players reported Saturday for medicals, arriving on a chilly weekend with a dump of snow. Monday was the first day training was open to the media.

TFC officials had been hoping for a quieter pre-season than last when GM Tim Bezbatchenko left to take over Columbus, star attackers Giovinco and Victor Vazquez departed for greener pastures and Dutch international defender Gregory van der Wiel was sent packing after a training camp bust-up.

That left Curtis, the new GM, with plenty of holes to fill with little time to do it ahead of the regular season. It took until the summer transfer window to fix the roster.

It seemed going into this season that the search for a designated player was going to be the main question mark. Monday added a few more.

Coaches and players leave Thursday for warm-weather training in Orlando through Jan. 29. They then return home briefly before leaving Feb. 5 for Irvine, Calif., for the rest of training camp. They have five MLS pre-season games scheduled from Feb. 8 to 22.

The team opens the regular season Feb. 29 at the San Jose Earthquakes.

This report by The Canadian Press was first published Jan. 20, 2020.