Toews, Blackhawks thump Leafs 6-2 to send Toronto into break on a sour note

TORONTO — The Maple Leafs had plane tickets in hand, ready to jet off to warmer climates. In truth, it looked like they already had one foot out the door.
0
Jan 19, 2020 12:49 AM By: Canadian Press 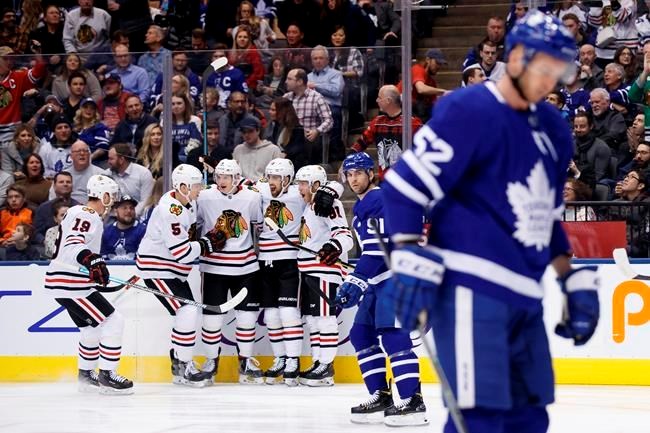 TORONTO — The Maple Leafs had plane tickets in hand, ready to jet off to warmer climates.

In truth, it looked like they already had one foot out the door.

Jonathan Toews scored twice as part of a four-point night as the Chicago Blackhawks raced out to an early lead and never looked back in a 6-2 romp over listless, disinterested Toronto.

"Sloppy, missed assignments, careless with the puck," Leafs captain John Tavares said of a start that saw the visitors connect on three of their first six shots. "Just not good enough."

Toronto has one victory over its last six games (1-3-2) after starting 15-4-1 under new head coach Sheldon Keefe to fall out of a playoff spot in the Eastern Conference as players and coaches head their separate ways to sunny destinations like Barbados, Arizona, California and Augusta, Ga., for a nine-day break.

"It's time to just look in the mirror," said Leafs netminder Frederik Andersen, who surrendered six goals on 34 shots in another sub-par performance. "It's not a time to point fingers.

"Use this week to reflect and make sure we come with more intensity and more purpose."

Rookie winger Dominik Kubalik added two goals and an assist for Chicago (23-20-6), while Drake Caggiula, with a goal and an assist, and Brandon Saad provided the rest of the offence. Corey Crawford made 31 saves and Erik Gustafsson chipped in with two assists as the Blackhawks won their fourth straight game.

"We've found ways to make things interesting in a lot of games where we get leads early," Toews said. "We were pretty determined to keep our foot down."

The Leafs laid an egg in last Sunday's 8-4 loss in Florida after heading south a day early, and didn't do themselves any favours with time off dangling in front of them Saturday as they prepared to abandon snow-covered Toronto.

"Very frustrating," Keefe said. "When you go through these types of things — such as Florida, such as this — it's just a sign of where you are, that you're not where you want to be. Reality checks come.

Caggiula opened the scoring on the night's first shot just 21 seconds in, collecting a puck off the end boards and banking home his fifth goal of the season from the side of the net.

Toews doubled Chicago's lead at 5:32 on a delayed penalty when he snapped his 13th through Andersen's five-hole.

Heading to Georgia during the team's league-mandated bye week and all-star break to play golf at famed Augusta National with Andersen, Jake Muzzin and Kasperi Kapanen, Nylander had a couple of chances from the slot — only to see Crawford shut the door.

The spurt, however, was short-lived as the Blackhawks, who have two more games before getting 10 days off, made it 3-0 at 11:02.

Activated off injured reserve after missing his team's last 12 contests with an ankle problem, Saad took a pass from Kane at the blue line off a turnover, and the Chicago winger fired his 12th upstairs as Toronto gave up three goals or more in the opening 20 minutes of a game for the fourth time this season.

Nylander got one back 25 seconds into the middle period with his 22nd on a power play, but Toews responded on a wraparound to make it 4-1 just 2:54 later.

Timothy Liljegren, who made his NHL debut as the Leafs dressed seven defencemen, then got caught between two minds deciding if he should change or not, and Kubalik pounced after a Toews feed and ripping home his 19th at 10:58.

Fans at Scotiabank Arena gave Andersen a Bronx cheer on his next save — his 12th on 17 attempts on goal — a response he didn't appreciate, but also understood.

"It's easier for players to play well when they have support," Andersen said. "But you've also got to work and play well to get that kind of support."

Kerfoot tipped a Pierre Engvall shot for his eighth at 15:17, but Kubalik made it 6-2 just 2:25 after that when he batted a saucer pass from Toews out of mid-air right for his 20th.

"You can't give a good player a bad pass," Toews said. "I tried my best on that one."

The Chicago captain, who joked Saturday morning he's "almost sick of hearing" about Kane's pursuit of 1,000 points, now has 798 of his own.

No doubt smelling his milestone within reach, Kane had three cracks at 1,000 points on a dominant shift midway through the third, but Andersen — one of the Leafs' three all-stars along with Auston Matthews and Mitch Marner, who were both minus-4 — shut the door to save a little face on an otherwise miserable night.

"They just came out really hard ... and we were pretty flat," Matthews said. "We weren't really ready to play."

With 33 games left on the schedule, Toronto has some time to reflect on what needs to change when the club returns to action in Nashville on Jan. 27.

This report by The Canadian Press was first published Jan. 18, 2020.

Artem Anisimov scores winner, Senators beat Stars 4-3 in overtime
Feb 16, 2020 10:08 PM
Comments
We welcome your feedback and encourage you to share your thoughts on this story. We ask that you be respectful of others and their points of view, refrain from personal attacks and stay on topic. To learn about our commenting policies and how we moderate, please read our Community Guidelines.