HAMILTON — For the first time since a controversial play in the CFL season opener, Hamilton Tiger-Cats linebacker Simoni Lawrence and Winnipeg Blue Bombers quarterback Zach Collaros will square off Sunday in the Grey Cup.
Nov 19, 2019 8:32 PM By: Canadian Press 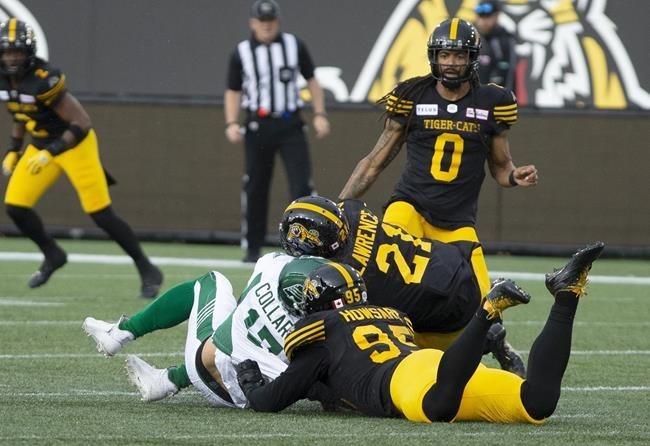 HAMILTON — For the first time since a controversial play in the CFL season opener, Hamilton Tiger-Cats linebacker Simoni Lawrence and Winnipeg Blue Bombers quarterback Zach Collaros will square off Sunday in the Grey Cup.

But Lawrence, for one, is more interested in praising Collaros than rehashing the incident.

Lawrence picked up a two-game suspension after a head-to-head collision with Collaros, then with the Saskatchewan Roughriders, in June. Collaros, a former teammate of Lawrence in Hamilton, suffered a concussion on the play.

"I think it's remarkable what he's done," Lawrence said Tuesday before the Ticats flew to Calgary. "To come back and not play football all season and just compete like that in the playoffs and beat two really great teams, that's impressive to me. I just think that's remarkable and I think he did a great job. I'm proud of him for that."

Lawrence sent out a tweet on Sunday congratulating Collaros on the Bombers' win over the Saskatchewan Roughriders in the West final and said the two hashed things out in the aftermath of the incident.

"We talked for a while, we talked about everything," Lawrence said.

"Everything's good. We wished each other our best and that's just what it is. At the end of the day, I know how Zach's built. He's a competitive dude. We're excited to play the Winnipeg Blue Bombers."

Said Collaros upon arrival in Calgary: "Simoni and I have talked. It was a good conversation. It's behind us. We'll move forward and I hope everybody here can appreciate that. It's a non-factor."

Collaros was traded to the Argonauts in August, but never saw action with Toronto.

At the trade deadline, the Argos shipped Collaros to Winnipeg, where he was the starter in the Bombers' season-ending victory and remained in that position for playoff wins over the Calgary Stampeders and Saskatchewan.

Lawrence last teamed with Collaros in 2014. The East's nominee for defensive player of the year, Lawrence hopes to help end the Ticats' 20-year drought and bring home the team's ninth Grey Cup.

"As football players, we're a competitive group and I feel like we know how inspired everybody is going to be (for the final)," Lawrence said.

"The guys that are here, all they know is winning. You don't want to play with them too much. We've been pretty dominant here, so those guys are prepared for this moment."

While another chapter in the Lawrence-Collaros saga is set to unfold, Ticats coach Orlondo Steinauer is steering clear of that storyline.

"No thoughts (on Collaros vs. Lawrence)," Steinauer said.

"The thoughts are focused on ourselves. Zach was instrumental on helping us get to Grey Cups when he was here, but that's in the past. He's an outstanding player, he can throw the ball, but it's not about Zach or anybody, it's about the Winnipeg Blue Bombers."

— With files from Donna Spencer

This report by The Canadian Press was first published Nov. 19, 2019.

Morikawa clutch in finish and playoff to win Workday Open
Jul 12, 2020 5:20 PM
Canadian Taylor Pendrith finishes second at Korn Ferry Tour event
Jul 12, 2020 3:47 PM
Comments
We welcome your feedback and encourage you to share your thoughts. We ask that you be respectful of others and their points of view, refrain from personal attacks and stay on topic. To learn about our commenting policies and how we moderate, please read our Community Guidelines.