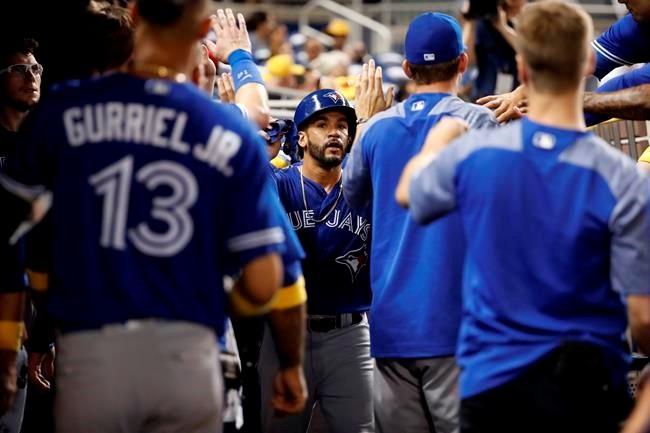 MIAMI — Martin Prado looked to be at full strength in his first game in three weeks.

Prado hit a bases-clearing double in his return from his latest injury, Wei-Yin Chen pitched eight strong innings and the Miami Marlins beat the Toronto Blue Jays 6-3 on Saturday night.

"It was huge personally and for the team," Prado said. "I think every time you get to contribute to win a game at this level is a good feeling."

Prado, who had been on the disabled list for the third time this season, doubled off the wall in left- field in the fifth inning to give the Marlins a 6-1 lead. He didn't assume the long flyball would clear the fence.

"You never know with this field," Prado said. "There's days where the ball just carries more than other days. I was just glad I hit it in the air because I didn't want to hit a ground ball for a double play."

Chen (6-9) allowed one run on three hits. He struck out seven without walking a batter.

"When he's locating, he's got enough weapons to get people out and he's a guy who can really pitch," Marlins manager Don Mattingly said. "It's nice to see the guy we thought we had when he's healthy."

J.T. Realmuto hit his 18th home run and Brian Anderson knocked in two for the Marlins, who snapped a four-game skid.

Toronto's Justin Smoak hit a two-run homer, his 23rd of the season, in the ninth. It was Smoak's fourth consecutive game with a home run.

Randal Grichuk got the Blue Jays on the board with a sacrifice fly in the fourth.

Anderson drew a bases-loaded walk for a 3-1 lead right before Prado's double.

"Our starting pitching has been getting hit around pretty good the last week to 10 days, putting us behind the eight ball," Blue Jays manager John Gibbons said. "It's hard to come back each night."

"I'm trying to give these guys innings and obviously I'm not doing my job right now," Estrada said. "But I'm going to keep working hard and get this thing right. Hopefully for the next one I'll feel a lot better and pitch better for these guys."

The Marlins also welcomed back fielder Lewis Brinson from the disabled list. Brinson went 1 for 4 after missing the last 48 games with a hip injury.

"It's just good to get guys back out there," Mattingly said.

Dan Straily and Chen pitched eight innings in consecutive games, becoming the first Marlins to do so since May 6-7, 2014, when Henderson Alvarez tossed a shutout and Tom Koehler went eight innings in games against the New York Mets.

Blue Jays: RHP Marcus Stroman (blister) is looking to return from the disabled list and start Monday's game against Tampa Bay. "Stro threw a side today and he felt really good," Gibbons said. ... IF Yangervis Solarte (oblique) is progressing toward a return. "Solarte is doing everything," Gibbons said. "He's been swinging it, running, doing all of that stuff, he's coming along pretty quick."

Marlins: RHP Pablo Lopez (shoulder) was placed on the 10-day disabled list and is out for the rest of the season finishing his rookie year with a 2-4 record and 4.14 ERA in 10 starts. ... RHPs Elieser Hernandez (blister) and Jarlin Garcia (shin) will begin their rehab assignments on Sunday with Triple-A New Orleans.

Whitecaps' match against FC Dallas at MLS is Back Tournament pushed back
Jul 4, 2020 6:09 PM
Canadian Taylor Pendrith notches career-best tie for third at Korn Ferry event
Jul 4, 2020 5:03 PM
Comments
We welcome your feedback and encourage you to share your thoughts. We ask that you be respectful of others and their points of view, refrain from personal attacks and stay on topic. To learn about our commenting policies and how we moderate, please read our Community Guidelines.