MONTREAL — No more excuses — that's the mantra for the Montreal Impact going into the final four games of the MLS season.
0
Sep 13, 2019 3:51 PM By: Canadian Press 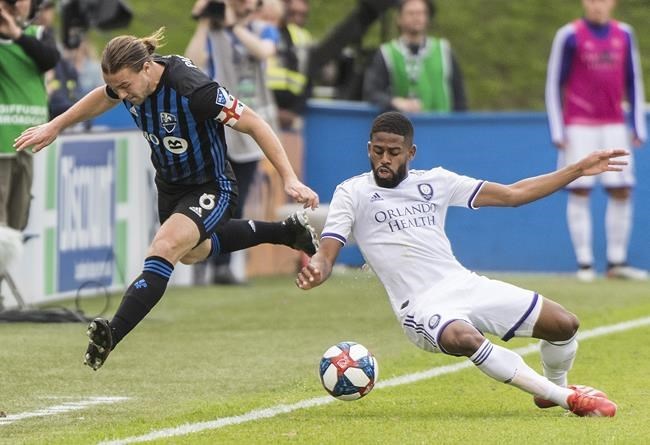 MONTREAL — No more excuses — that's the mantra for the Montreal Impact going into the final four games of the MLS season.

At risk of missing the playoffs for the third consecutive year, the Impact (11-15-4) desperately need a win against the league's worst team, FC Cincinnati (5-21-3), on Saturday at Saputo Stadium.

The eighth-place Impact (37 points) are two points behind the New England Revolution (39 points) for the final playoff spot in the Eastern Conference. The Revs have a game in hand.

Montreal is coming off its two-week international break and the players are, for the most part, healthy and well rested. They have not played since a 3-0 drubbing at home to D.C. United on Aug. 31.

"The guys who were here have had a full week of training with our new coach to implement what he wants," said midfielder Samuel Piette, who helped Canada defeat Cuba twice in the CONCACAF Nations League over the break. "Everyone seems to be healthy as well. Players are coming back from their national teams.

"At this late point in the season, we can't be looking for excuses anymore. We have to win games, starting with Saturday."

A chaotic summer for the Impact is finally beginning to settle down — with injuries, tough scheduling and personnel changes seemingly in the rear-view mirror.

Star midfielder Ignacio Piatti practised with the team during the break and is likely to see minutes — either as a starter or off the bench — against FC Cincinnati. The Argentine has been limited to just six starts this season as he dealt with knee and adductor injuries.

Defender Victor Cabrera (elbow injury) is also nearing a return while the newly re-acquired Rod Fanni, who has not played professional soccer since October 2018, is finally approaching match fitness.

The Impact have one victory in their last six games (1-4-1) — a slump that now forces them to rely on other teams like New England and the New York Red Bulls to drop points.

Last-place FC Cincinnati is the perfect opposition to help Montreal find its way back in the win column. Cincy is winless in nine league matches, including a current four-game losing skid where they've been outscored 15-4.

With an abysmal 18 points from 29 games in its inaugural season, Cincinnati has already been eliminated from playoff contention. The team has scored a league-worst 29 goals — an average of exactly one goal per game.

"When you lose all the time, you get in a bad situation and you just accept it," coach Ron Jans told the team's website this week. "We have to fight that against Montreal. Confidence is so important. When you're a good player and you have no confidence, you're not a good player anymore."

LAST TIME OUT: FC Cincinnati has won only five games this season, but one of those was against Montreal. Cincy defeated the Impact 2-1 in the first-ever meeting between the franchises on May 11.

SET PIECES: Under new coach Wilmer Cabrera, the Impact have dedicated a lot of practice time to defending set pieces. Montreal has conceded 14 goals this season on free kicks and corner kicks.

CANADIAN FINAL: The end of the season will be a juggling act for Montreal, as they play two midweek matches in the Canadian Championship Final against Toronto FC (Sept. 18 and 25).

Als head coach Jones says he received death threats as CFL player in Winnipeg
Jun 2, 2020 6:26 PM
Former Canadian university defenceman Kodie Curran signs with Anaheim Ducks
Jun 2, 2020 6:18 PM
Comments
We welcome your feedback and encourage you to share your thoughts. We ask that you be respectful of others and their points of view, refrain from personal attacks and stay on topic. To learn about our commenting policies and how we moderate, please read our Community Guidelines.