Stefan Ptaszek has a tough act to follow. His own. The 48-year-old Burlington, Ont., native is back for his second stint as the head football coach at McMaster University.
0
Aug 22, 2019 6:29 PM By: Canadian Press 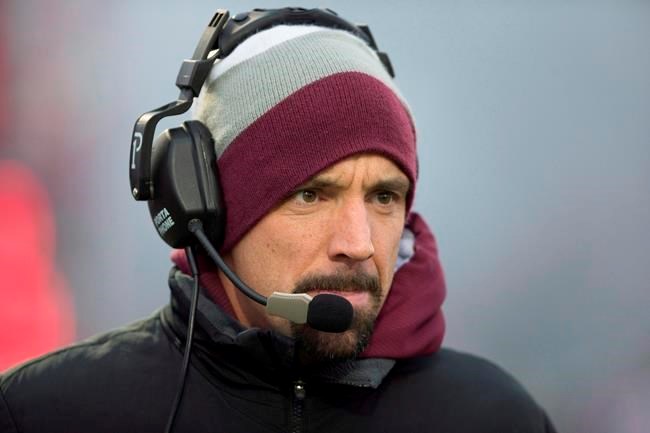 Stefan Ptaszek has a tough act to follow. His own.

The 48-year-old Burlington, Ont., native is back for his second stint as the head football coach at McMaster University. He served as the Marauders' head coach from 2006-2015, leading the Hamilton school to a Vanier Cup title in 2011 and appearances in the championship game in 2012 and '14.

While there's plenty that's still familiar to Ptaszek at McMaster, there are also some subtle differences.

"I think some of the culture and things that are ingrained aren't going to change in 100 years and you already know what that kind of looks like," he said. "With student-athletes, there's going to be some fresh faces.

"There's enough that's new but there's a base here that makes the transition just a little smoother and you can get traction a little quicker."

The '19 Ontario University Athletics season opens Sunday with five games, including McMaster visiting the Guelph Gryphons. The U Sports campaign kicks off Friday night with the Montreal Carabins facing their city rivals — the Concordia Stingers.

On Saturday, the Atlantic conference gets going as the Mount Allison Mounties take on the St. Francis Xavier X-Men and the Bishop's Gaiters play the Acadia Axemen. Action continues Sunday with the OUA contests as well as the Sherbrooke Vert et Or squaring off against the Laval Rouge et Or, the defending Vanier Cup champions.

McMaster (5-3) finished tied for third with Guelph and Carleton in the OUA last season but saw its season end with a 30-25 quarterfinal loss to the Ravens. However, Ptaszek has no shortage of talent to work with this season.

"I think there's 22 starters back and a year bigger, stronger, faster and a year wiser," Ptaszek said. "Especially at the quarterback position, which is pretty significant in three-down football."

Andreas Dueck returns under centre for McMaster. The six-foot-two, 210-pound Winnipeg native was 103-of-173 passing (59.5 per cent) for 1,458 yards with five TDs and eight interceptions in his first season as the starter. He also ran for 134 yards on 18 carries (7.4-yard average).

With Dueck entering just his third year at McMaster, the Marauders know who their starter will be moving forward.

"Yes, that's something you can build on on the recruiting trail," Ptaszek said. "The locker room is in a comfortable place.

"The line of scrimmage and the big boys know every piece of iron they push is going to matter because the quarterback is ready to go."

But making hay in the OUA won't be easy.

The Western Mustangs, who lost 34-20 to Laval in last year's Vanier Cup after winning it in '17, were 8-0 last year and have traditionally been a powerhouse in Ontario. Ottawa (6-2) was second ahead of Guelph, Carleton and McMaster. Close behind were the Waterloo Warriors and Laurier (both 4-4) while Queen's and York were next (3-5).

"I think the health of the OUA is best defined by looking at some of the quality football teams that didn't make the playoffs," Ptaszek said. "Laurier and Queen's are good football teams . . . the league is healthy.

"I do think there's as many as eight of us that have a chance at winning it. I don't disagree (that) Western is first in the conversation but after that it's anybody."

McMaster isn't the only OUA program with a new head coach. Former Western assistants Steve Snyder and Jean-Paul Circelli have taken over at Queen's and Windsor, respectively, while Ryan Sheahan, the former assistant head coach/offensive co-ordinator at Calgary, is the head man at Guelph.

In a bizarre twist, Sheahan's father, Pat, is Calgary's new offensive co-ordinator after 19 seasons as the head coach at Queen's.

"I definitely feel the youth and all of the different head coaches around the province," Ptaszek said. "Mentors like coach (Pat) Sheahan at Queen's and coach (Greg) Marshall at Western, they're fewer and farther between and there's more kids that I've coached or coached against coming up being coaches.

"Those are the new faces, fresh blood and energetic and talented men. It's fun to see."

Note to readers: This is a corrected story. A previous version incorrectly had Ottawa tied for third in the OUA last season.