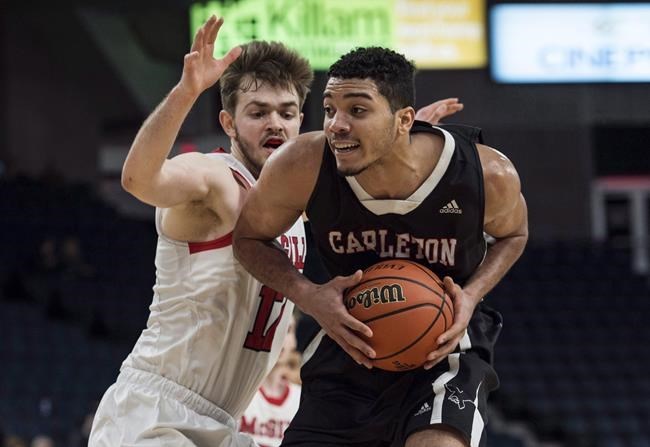 Police said in a release Friday that Eddie Ekiyor, 22, has been charged with sexual assault, kidnapping and overcoming resistance to commit an offence.

The charges come after police received a complaint from a woman regarding an incident in Ottawa's popular ByWard Market entertainment district on April 7.

Police allege a male suspect met a 23-year-old woman at a bar and "plied her with alcohol and drugs" before taking her to an address in the city's west end, where he sexually assaulted her as she moved in and out of consciousness.

Police say the victim was put in a taxi cab following the assault.

Ekiyor played for three years at Carleton, leading them to two titles. A six-foot-nine power forward, he was named MVP of the 2019 U Sports men's basketball tournament.

It's the second time Ekiyor has been charged with a crime in Ottawa. As an 18-year-old, he pleaded guilty to charges of criminal negligence causing bodily harm and failure to remain at the scene after his car struck an off-duty Ottawa police officer on Aug. 8, 2015.

Shortly after the incident, Ekiyor committed to Carleton rather than play collegiately at Xavier of the NCAA's Big East Conference.

Canadian rankings to be used to determine final wild-card spots at Scotties and Brier
Jan 22, 2021 5:00 PM