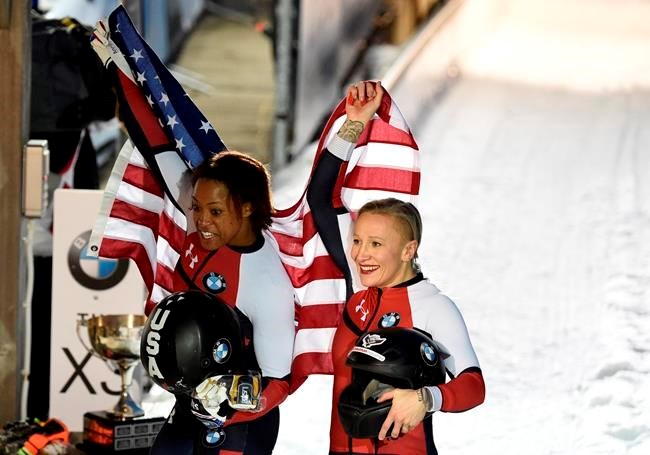 The Canadian bobsled women came from behind on the final two runs to finish third at the BMW IBSF World Championships for a second straight year.

"This one feels so good, we didn’t expect it at all," said de Bruin, of Stony Plain, Alta. “After (Friday's) runs, we just said let’s keep doing the things we have been doing and plugging away. I am so happy."

The Canadians were fifth following the first two runs Friday.

"Honestly, our thought process was the same as it always is,” said Bujnowski, of Mount Brydges, Ont. "We knew it was so close and it is impossible not to think about what the result could be, but it was important not to get ahead of ourselves and I just wanted to think about the technical things that I had to do."

The American sled of Kaillie Humphries and Lauren Gibbs was first in three minutes 45.49 seconds. Germany’s Kim Kalicki and Kira Lipperheide were second in 3:45.86, followed by de Bruin and Bujnowski in 3:46.55.

For Humphries, it was her third world title. Her first two, along with both of her Olympic gold medals, were won for Canada.

But Humphries — the wife of an American, but still a Canadian citizen — came to USA Bobsled and Skeleton last fall, after sitting out last season amid allegations of verbal and mental abuse with the Canadian program and saying that left her not feeling safe to remain part of that team.

“It hasn't been without struggle," Humphries said Saturday night, as the cheers and cowbell-rings of the crowd rained down on the new world champion. “But at the end of the day, this makes it all worth it.”

“Our old girl's still got it," Gibbs said. “I consider my job is to give Kaillie as much room to just do what she does best and not get in her way, not hold her back.

There were 16 sleds left going into Saturday’s final heat, but the title was basically a two-sled race: Humphries vs. Kalicki. Humphries led Kalicki by 0.19 seconds, with all other drivers well off the pace. Kalicki had a relatively clean fourth run, though Humphries was perfect and sealed the title.

Humphries would have been a cinch to win the World Cup overall title this season as well had she not skipped the season finale, a decision she made to devote more time to preparing for the world championships.

It was a risky move.

“We took the last World Cup race off to prepare for this and it worked," Humphries said. “I'm so happy it worked."

And a trophy that wouldn’t exist if not for her is, rightly, back in her possession. When Humphries won her first world title in 2012, she was disappointed to learn that there wasn’t a trophy — men’s bobsledders have ones to hoist for winning two- and four-man titles, shiny chalices engraved with the names of all past winners.

Such a prize didn’t exist for the women. Humphries’ parents offered to buy one themselves and donate it to the International Bobsled and Skeleton Federation, and when that organization finally got a trophy for the women it was Humphries who commissioned the engraving of all past winners’ names.

For the third time, her name is headed there.

"We are extremely proud of the things she has done to make the sport a better place to be in,” Humphries’ mother, Cheryl Simundson, said before the start of the world championships. “She's leaving a legacy for the future generation of girls and young women, showing that one person can make a difference no matter how small."

Kirasis won in 2005, 2007 and 2008 — three consecutive titles, since there were no world championships in the Olympic year of 2006, when the German legend also took gold at the Turin Games.

Humphries has also been the brightest spot for the U.S. in the three sliding sports all winter. USA Luge has 11 medals this winter, but no golds. USA Bobsled and Skeleton combined for seven World Cup medals this season, two of those being a four-man bronze in a sled driven by Hunter Church and a women’s skeleton bronze from Megan Henry.

Everything else — four World Cup golds, one World Cup bronze and now the 13th world championship in USABS history from two-man, four-man, women’s bobsled and skeleton events — has come with Humphries in the driver’s seat.

“I really couldn't have done it without everybody on my team this year," Humphries said.

The Associated Press contributed to this report.

This report by The Canadian Press was first published Feb. 22, 2020.

Senators commentator Gord Wilson tests positive for COVID-19
Mar 27, 2020 11:17 PM
Comments
We welcome your feedback and encourage you to share your thoughts on this story. We ask that you be respectful of others and their points of view, refrain from personal attacks and stay on topic. To learn about our commenting policies and how we moderate, please read our Community Guidelines.