RIGA, Latvia — Andrew Mangiapane continued his dominant performance at the world hockey championship with two goals, including the game winner, and Canada advanced the final with a 4-2 win over the United States on Saturday.
Jun 5, 2021 1:33 PM By: Canadian Press 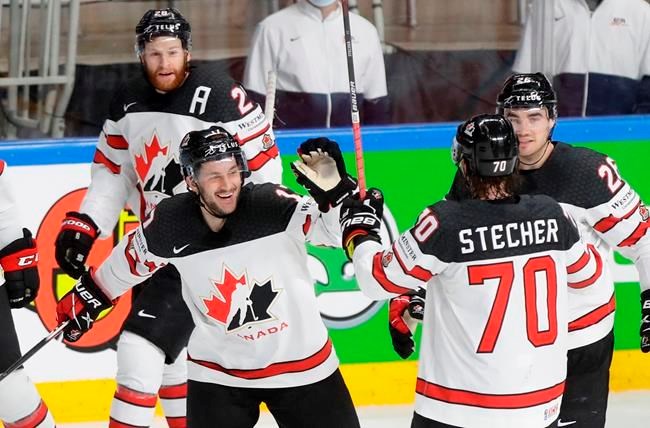 RIGA, Latvia — Andrew Mangiapane continued his dominant performance at the world hockey championship with two goals, including the game winner, and Canada advanced the final with a 4-2 win over the United States on Saturday.

Mangiapane, a Calgary Flames forward, has seven goals and four assists in six games since joining Canada midway through the preliminary round. Canada started the tournament with three straight losses, but has five wins and a shootout loss since Mangiapane was added to the mix.

"It is crazy how we were able to battle back in this tournament," Mangiapane said. "We have been the underdogs in most of our games, but we just keep proving people wrong.

"It is great to see, and great to see the character of our team and the level of competitiveness we have. We know we are not done yet and we have one more game to take care of business."

With Saturday's win, Canada heads to the final for the fifth time in the past six tournaments. Canada's last gold medals came back to back in 2015 and '16.

Canada will face Finland in Sunday's gold-medal match. It's a rematch of the 2019 final, which Finland won 3-1. The 2020 tournament was cancelled because of COVID-19.

Finland, which defeated Canada 3-2 in a shootout in their final preliminary-round game, beat Germany 2-1 in the semifinals.

The Americans, meanwhile, will fall short of capturing their first title since 1960.

Brandon Pirri also scored for Canada, while Justin Danforth sealed the game with an empty-net goal with 23 second left. Ottawa Senators teammates Connor Brown and Nick Paul had two assists each and Darcy Kuemper made 36 saves.

Canada barely avoided missing the playoffs for the first time at an Olympics or world championship. The Canadians put themselves in a hole early with losses to Latvia, the U.S., and Germany and needed help after failing to beat Finland to clinch a spot.

But Canada was given a lifeline when Germany beat Latvia in regulation to end the preliminary round, a result that locked Canada into fourth place in Group B.

Canada made it count, beating favoured Russia 2-1 in overtime in the quarterfinals.

"After our third game we started to play some good hockey, and we are a better team now than we were at the start of the tournament," head coach Gerard Gallant said. "We are playing our best games at the right time, and our players are coming together and are really proud to be playing for a gold medal."

In Saturday's game, Pirri opened the scoring just over two minutes into the first period to give Canada the early lead. Blackwell scored for the U.S. at 17:17 of the period to send the teams into the first intermission tied 1-1.

Mangiapane scored the only goal of the second period, then put Canada up 3-1 with his second goal of the game 46 seconds into the third.

Chmelevski scored about three minutes later to trim Canada's lead to one, but Kuemper made 13 saves in the final frame to help preserve the slim advantage. Danforth then capped the scoring with Petersen on the bench in favour of an extra attacker.

"It would have been nice to get my first goal earlier than the eighth game of the tournament, but I just wanted to play the right way and I knew my opportunities would come," Danforth said.

This report by The Canadian Press was first published June 5, 2021.