CALGARY — The playoff race in the CFL's West Division is so tight, Stampeders defensive back Brandon Smith wanted to connect with fans in Calgary's last home game of the regular season just in case.
Oct 20, 2019 12:07 AM By: Canadian Press 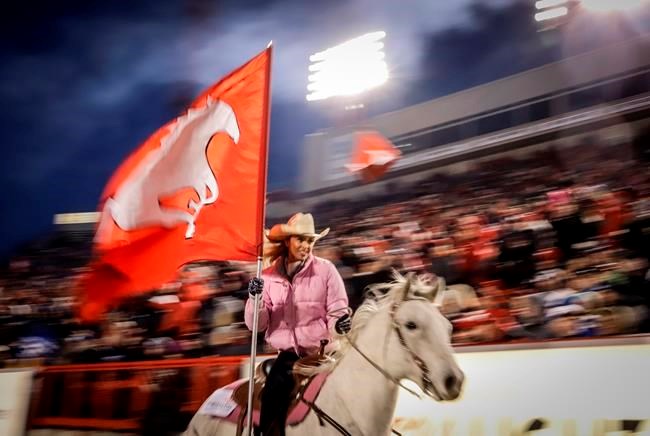 CALGARY — The playoff race in the CFL's West Division is so tight, Stampeders defensive back Brandon Smith wanted to connect with fans in Calgary's last home game of the regular season just in case.

Smith announced prior to Saturday's kickoff against the Winnipeg Blue Bombers he'll retire after 12 seasons and three Grey Cups with Calgary.

The longest-serving active Stampeder was lauded at McMahon Stadium as he ran out of the tunnel.

Whatever happens in the post-season, the 35-year-old from Oakland, Calif., can look back at Saturday's hard-fought 37-33 win over the Blue Bombers with satisfaction.

"I've been in Calgary my whole career. Nothing but love for the city," Smith said following the game.

"With the battle going on in the West, we're confident, but there's still uncertainty. We have to play out the season, but just to give the fans a heads up . . . I felt I owed it to them at least."

Reggie Begelton had a trio of touchdown catches for Calgary (11-5).

Quarterback Bo Levi Mitchell completed 22-of-33 passes for 337 yards and three touchdown throws. He was intercepted once.

"I feel like that was one of my top performances in awhile," Mitchell said.

Justin Medlock kicked four field goals for the Blue Bombers in front of an announced 26,885.

Winnipeg quarterback Chris Streveler was limping by the end of the game and replaced by Sean McGuire for a series midway through the fourth quarter.

The Blue Bombers had the ball on the game's final drive, but Streveler's last throw was picked off by Calgary's DaShaun Amos.

Streveler finished 18 of 27 pass attempts for 134 yards and one touchdown pass. He was intercepted twice.

"We don't take pride in close losses," Streveler said. "I know our team can finish. I believe in every single one of the guys in this locker room. Just a couple plays here and there that don't go our way.

"Such an emotional and physical game, it's kind of hard to wrap my mind around all the schematic things at the moment."

The race for first place and jockeying for home playoff games in the West Division is going to the wire this season.

Calgary went 2-0 against the Saskatchewan Roughriders, also 11-5, and would thus finish ahead of the 'Riders in the event of a tie in the standings.

The Stampeders and Blue Bombers are 1-1 against each other so far this season. Calgary will attempt to clinch that series Friday in Winnipeg.

The Bombers, who finish the season with a bye week, need a win Friday and for Calgary to lose the following week to the B.C. Lions to finish ahead of the defending Grey Cup champions.

Saskatchewan ends the regular season with a home and home versus the Edmonton Eskimos (8-8).

The top team in the West hosts the division final Nov. 17 and gets a week's rest while the second and third seeds duke it out in the Nov. 10 semifinal.

Winnipeg led 27-19 at halftime Saturday, but the score was knotted 30-30 by the end of the third quarter.

After a 41-yard Medlock field goal, Begelton collected his third touchdown with a 17-yard catch-and-run at 4:44 of the fourth.

Winnipeg turned the ball over on downs with 1:36 remaining in the game when Chris Casher sacked Streveler.

Paredes wide on a 48-yard field-goal attempt in the last minute put the ball back in Streveler's hands, but the Bombers couldn't generate the winning score.

Trailing 11-3 after one quarter, Winnipeg rattled off 17 points in the first five minutes of the second — 14 off Calgary turnovers — to lead 20-11.

With 76 all-purpose yards, Winnipeg's Andrew Harris became the seventh player in CFL history to amass a career 14,000 from the line of scrimmage.

Calgary's Rogers had 71 receiving yards to crack a season 1,000 for the second time in his career.

Calgary hosting the Grey Cup in November was an inducement for Smith, who had five tackles Saturday, to play one more season.

The Stampeders have never won a championship on home turf. Smith would love that to be the last chapter of his football career.

"All we have to do is keep fighting week in and week out and give it our all," Smith said. "I'm going to empty out the tank this year."

This report by The Canadian Press was first published Oct. 19, 2019.

TFC, D.C. United game rescheduled to Monday after COVID-19 test concerns: source
Jul 12, 2020 6:26 PM
Comments
We welcome your feedback and encourage you to share your thoughts. We ask that you be respectful of others and their points of view, refrain from personal attacks and stay on topic. To learn about our commenting policies and how we moderate, please read our Community Guidelines.