Adams Jr., Alouettes come from behind to beat Stampeders 40-34 in overtime

CALGARY — Quarterback Vernon Adams Jr. didn't care that the Montreal Alouettes hadn't won a game in Calgary since 2009. He also didn't care that his team was down 11 points late in Saturday's game against the defending Grey Cup champions.
Aug 18, 2019 12:07 AM By: Canadian Press 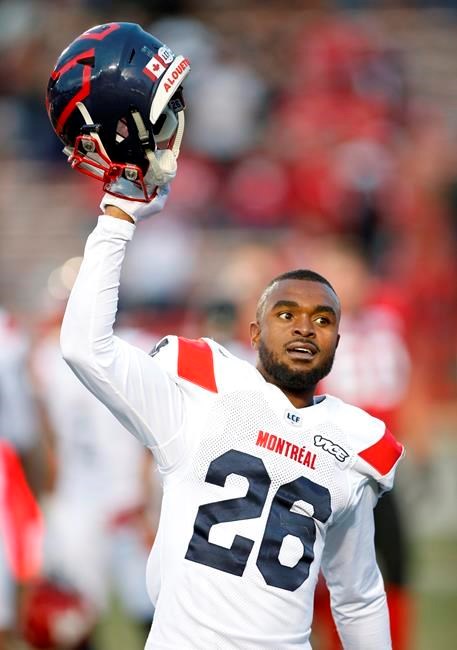 He also didn't care that his team was down 11 points late in Saturday's game against the defending Grey Cup champions.

"We believed in ourselves, so I don't think it was crazy at all," said Adams, who ran for a pair of one-yard touchdowns in overtime. "We went down and we got it and we earned it."

Although he threw a pair of interceptions in the first half, Adams regained his composure and wound up completing 32-of-50 passes for 389 yards and touchdown passes to Jake Wieneke and Eugene Lewis.

"I'm so proud of him," said Montreal coach Khari Jones. "Coming back from throwing a couple interceptions in the first half and not having a great start to the game, he just kept battling. He's a fighter and he made plays when we needed."

Reggie Begelton started the first overtime by scoring his fourth touchdown of the game for the Stampeders (5-4) when he caught a seven-yard pass in the end zone from quarterback Nick Arbuckle.

"It's real bittersweet when you don't come out with the W," said Begelton, who tied a franchise record for most receiving touchdowns in one game.

After Calgary failed to complete the two-point convert, the Alouettes scored on their possession when Adams plunged one yard into the end zone.

"I felt like we stopped them on third down, and they decided to call it a touchdown, and you can't overturn it," said Calgary coach Dave Dickenson, who thought his defence kept Adams short of crossing the line. "It was a mass of humanity. I did not see the ball cross the line, and I don't think (the officials) did either."

The Als also didn't complete the two-point convert, which forced a second overtime.

Adams then ran for another one-yard TD as Montreal went first in the second OT. Although Adams couldn't find an open receiver in the end zone for a two-point convert, the Alouettes defence stopped the Stamps during their possession to secure Montreal’s first win in Calgary since July 1, 2009 — ending a nine-game losing streak at McMahon Stadium.

"We know how hard it is to win in Calgary," Adams said. "It's my first time as a starting quarterback winning in Calgary and it feels so awesome."

Boris Bede booted four field goals for the Alouettes, while Rene Paredes kicked two field goals and added a single for the Stampeders.

Before the game even started, tempers flared during warmups at mid-field as injured Calgary linebacker Wynton McManis traded punches with former Stampeder and current Montreal cornerback Tommie Campbell before players from both teams joined in the skirmish.

"They had fight before the game unfortunately, but they fought during the game and that’s what I was very proud of,” said Jones of his players. “We’ll get the before-game stuff figured out and make sure that we do the right thing, but I'm really proud of the guys that they kept their heads during the game and didn't let that bleed into what was going on out there.”

Montreal opened the scoring at 4:53 of the first quarter thanks to a 29-yard field goal by Bede.

The Stamps answered back with a touchdown as Arbuckle shovelled a pass forward to Begelton, who ran eight yards into the end zone.

Calgary’s four-play, 43-yard drive was aided by a pair of infractions by the Als as Campbell was flagged for unnecessary roughness, while defensive back Greg Reid, who was also involved in the pre-game melee, was penalized for illegal contact on a receiver to give the Stamps a first-and-goal situation from the eight-yard line.

After Paredes kicked a 73-yard single to put the Stamps up 8-3, Montreal cut Calgary’s lead to just two points when Bede booted an 18-yard field goal.

Late in the second quarter, Begelton appeared to haul in another eight-yard throw from Arbuckle in the end zone, but the pass was ruled incomplete. Two plays later, the Stamps settled for a 10-yard field goal by Paredes.

The ensuing drive by the Als ended quickly when Calgary’s DaShaun Amos picked off an errant pass by Adams and ran it back into Montreal territory, resulting in a 27-yard field goal by Paredes to extend Calgary’s lead to 14-6.

Montreal tied things up early in the third quarter as Adams led the Alouettes on a five-play, 73-yard drive that culminated with him throwing a 15-yard touchdown pass to Wieneke. Adams completed a short pass to Lewis for a two-point convert.

The Stamps struck right back at 1:51 of the fourth quarter when Begelton hauled in a 56-yard touchdown pass from Arbuckle before the same two players combined on a 69-yard scoring strike at 4:47 to put Calgary up 28-17.

Lewis hauled in a 22-yard touchdown pass with 38 seconds left in regulation to cap off a six-play, 69-yard drive by Montreal before Wieneke caught a pass in the end zone from Adams for a two-point convert.

Lewis then recovered the ensuing onside kick by Bede and the Alouettes drove into Calgary territory to set up a 27-yard field goal by Bede to tie the score at 28-28.

"Both teams fought, both teams wanted it and fortunately we came out ahead and that was big," Jones said. "To win that game like that, being down in the fourth quarter and making the plays that we had to make, I'm really proud of those guys in there."

St Louis series at Detroit off after positive Cards tests
Aug 3, 2020 10:06 PM
Comments
We welcome your feedback and encourage you to share your thoughts. We ask that you be respectful of others and their points of view, refrain from personal attacks and stay on topic. To learn about our commenting policies and how we moderate, please read our Community Guidelines.