Bennett apologizes after Wilson-Raybould calls out her 'Pension?' message as racist

OTTAWA — Crown-Indigenous Relations Minister Carolyn Bennett has apologized after she was called out for a one-word text message to Independent MP Jody Wilson-Raybould, a former cabinet colleague.
Jun 24, 2021 9:22 PM By: Canadian Press 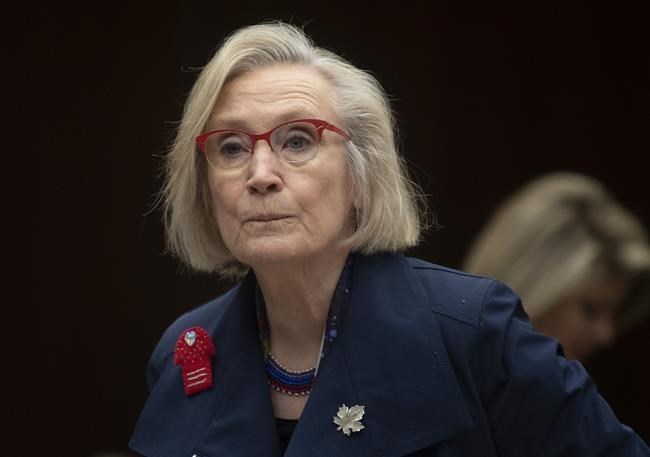 OTTAWA — Crown-Indigenous Relations Minister Carolyn Bennett has apologized after she was called out for a one-word text message to Independent MP Jody Wilson-Raybould, a former cabinet colleague.

Bennett messaged the word "Pension?" in response to a Wilson-Raybould tweet urging the prime minister to quit his "selfish jockeying" for an election and focus, as promised, on reconciliation with Indigenous people.

Her tweet was prompted by the announcement Wednesday by a Saskatchewan First Nation that 751 unmarked graves have been found on the site of a former Indigenous residential school in that province.

Bennett's pension reference appeared to suggest that Wilson-Raybould is worried she won't be eligible for a pension if she should fail to win re-election in a vote this summer or early fall.

Members of Parliament must serve for six years before becoming eligible for a pension and Wilson-Raybould, elected in October 2015, would miss that mark if she were not re-elected in an early fall vote.

Wilson-Raybould fired back, publishing Bennett's text on Twitter and calling it both racist and misogynistic.

The pension query reflects the notion that Indigenous Peoples are "lazy & only want $," Wilson-Raybould tweeted.

"Shows disregard, disdain, & disrespect for Indigenous peoples, as in our history," she wrote. "Conveys a strong Indigenous woman, is a bad Indig woman."

"I let interpersonal dynamics get the better of me and sent an insensitive and inappropriate comment, which I deeply regret and shouldn’t have done," she said.

Bennett said she had apologized directly to Wilson-Raybould. Neither politician responded immediately to requests for further comment on Thursday.

The apology wasn't sufficient for New Democrat MP Charlie Angus. He took to Twitter to demand that Bennett be fired.

"It is time that @Carolyn_Bennett was sent packing," he said.

Angus said Bennett's "smear" against Wilson-Raybould demonstrated that Trudeau's commitment to reconciliation is really "an agenda of political cynicism and spin."

"This isn't just petty but racist and disrespectful. She needs to go."

The Union of BC Indian Chiefs also called on Bennett to resign, saying it is "deeply disturbed and disgusted by the extreme callousness, spite, and ignorance you have shown through the racist message you sent to MP Jody Wilson-Raybould."

"This was a cowardly attempt to silence a powerful Indigenous voice calling out for truth, action and justice," the union said in an open letter to Bennett.

"With a single word – 'pension' – you not only decided to perpetuate a damaging racial stereotype, that Indigenous peoples are lazy and only financially motivated – but dismissed the pressing, overarching issue of residential schools, missing and murdered children, and Indigenous rights."

Wilson-Raybould was appointed by Trudeau as Canada's first Indigenous justice minister but was booted from the Liberal caucus in 2019 after she accused the prime minister of pressuring her to secure a deferred prosecution agreement for SNC-Lavalin.

She had earlier resigned as a cabinet minister over the affair.

In August 2019, the federal ethics commissioner concluded that Trudeau violated the Conflict of Interest Act by improperly pressuring Wilson-Raybould to halt a criminal prosecution of the Montreal engineering giant on corruption charges related to contracts in Libya.

Wilson-Raybould was re-elected as an Independent MP in October 2019.