The Newmarket Redmen's home office will have to display the Aurora Tigers jersey after a 64 to 52 games loss in the annual rep hockey tournament that makes the most of the friendly rivalry between the two neighbouring towns.
Oct 29, 2018 10:54 AM By: NewmarketToday Staff 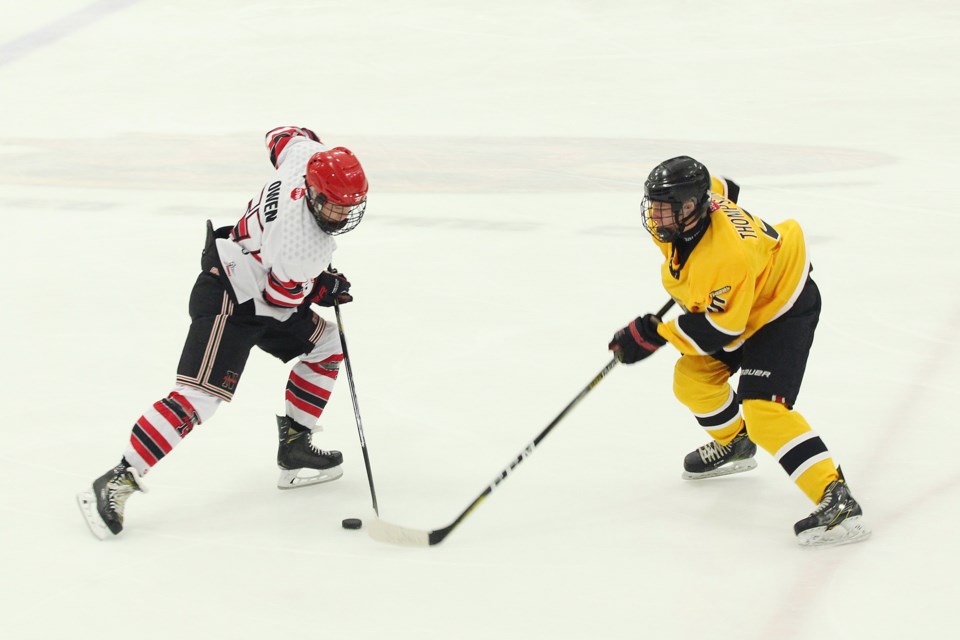 The 13th annual Battle of Yonge Street officially kicked off Friday with the Midget AA game at the Magna Centre. Photography by Greg King

It was a valiant effort, but at the end of it, the hometown Newmarket Redmen saw the Battle of Yonge Street trophy go to the Aurora Tigers.

"The AMHA will receive the trophy to display in their office and a year of bragging rights, while the NMHA must display the Tigers jersey in their office for one year," Kevin Winsor, vice-president of rep for the NMHA, said.

"It came down to the final few games on Sunday with Aurora pulling through to beat Newmarket," he added.

With the annual series tied at six each, the weekend's win was a "big one" for Aurora.

"Congratulations to Aurora on the big win," Winsor said. "With the series now at 7-6 for Aurora, we are all looking forward to next year."

Winsor acknowledged with gratitude the volunteers and fans who attended and made donations to the local food banks and other charities for which the annual home-and-home weekend series raises funds.

Final results can be found at here

Newmarket's Byfield a finalist for CHL top draft prospect award
May 9, 2020 11:51 AM
Comments
We welcome your feedback and encourage you to share your thoughts. We ask that you be respectful of others and their points of view, refrain from personal attacks and stay on topic. To learn about our commenting policies and how we moderate, please read our Community Guidelines.