So little is known about the slime-encrusted world of molluscs 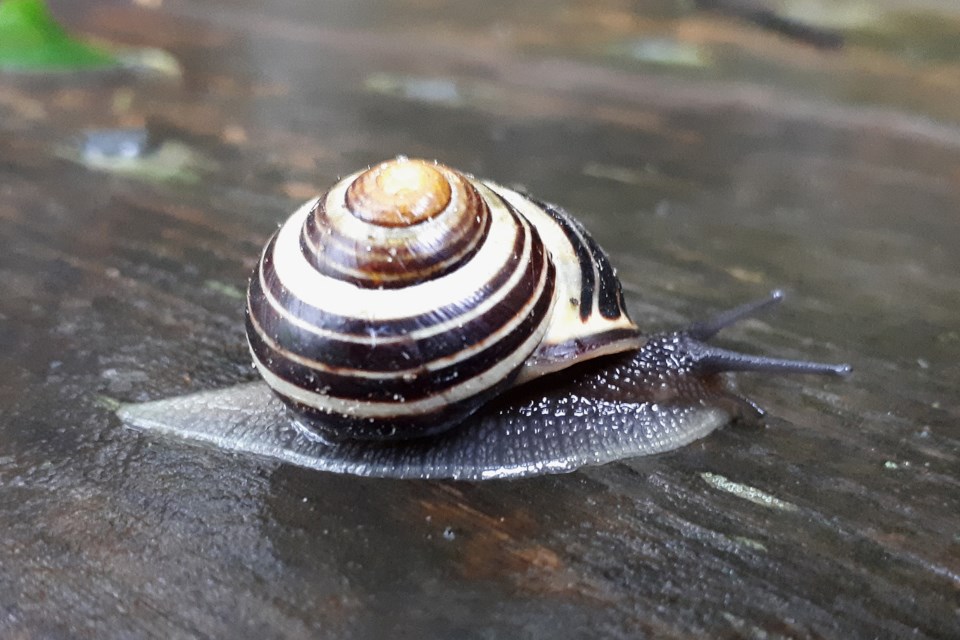 An adult male/female grove snail is seen sliding across the author's deck. Always keep your camera handy for such fleeting moments. David Hawke/OrilliaMatters

As another school year is upon us, it would be nice to know that somewhere out there a student or two is studying hard to become a malacologist, because it seems the world needs more malacologists. The list of those signing up for this fascinating work is proceeding at a snail's pace.

The sluggish response for new devotees to this area of study may be that not everyone knows just what it is that a malacologist does — they study the fascinating world of snails and slugs. Reading the literature relating to these backyard molluscs, one finds the documents commonly contain such phrases as "little is known," "research is scarce," "unconfirmed data" and "information is sparse and irregular."

So, here is an intro to this slime-encrusted world, a Molluscs 101 if you will. Snails and slugs belong to a large group of animals called molluscs, which are defined as being invertebrates (animals without a spinal cord) and with soft, unsegmented body parts. This is based on the ancient Greek word mollis, which means soft, but doesn't quite accurately describe the bulk of these critters that actually have a hard outer shell.

Within the large group known as Phylum mollusca, there are seven classes and one of them is Gastropoda. Keep reading; it gets interesting again on a moment. A quick check back to the Greek dictionary and we see that gastro is stomach and poda is foot, which translates that a snail is a "stomach-foot," which is a surprisingly accurate description.

Within Class Gastropoda can be found aquatic and terrestrial snails and slugs, with the biggest difference between them being that snails have shells and slugs do not (but you probably already knew that). Shells consist of a non-living material that is created by the snail from calcium and the shell gets added onto as it gets bigger and older; think of the material that makes your fingernails — part of you but non-living. The spiral formation is usually a right-hand twist (although a few snail species have a left twist to them) and is built in a mathematical logarithmic pattern. Should you find yourself drawn to the intimate patterning of arcs, chords, tangents and other such geometric stuff, snail shells are way cool to study.

Did you know that snails have four tentacles sticking out of their heads? It's true! Two long ocular ones have 'eyes' that can sense dark and light, and two short sensory ones that smell the air. And they have a brain! Snails can actually be taught how to respond to certain stimuli. Now there's something to digest while you ponder your morning coffee before another day in the office.

Another thing you are probably already aware of is that both snails and slugs move by sliding on a layer of mucus. By constantly spewing out a layer of slime ahead of itself, its muscles expand and contract and to pull the creature through its own spittle. This method of locomotion is very demanding of the snail as a lot of moisture is required to keep up this pace, which may be why snails clock in at one millimetre per second. It takes time to work up a good mouthful of spit.

That slime, however, is tough and that allows the snail to travel over pretty rough terrain such as sand and gravel. A good slime layer will provide protection for a snail to climb over a razor's edge. (Not sure why that experiment was done, or how many failures ensued, but it's in the literature and I thought you should know.)

Because these animals operate at a snail's pace, their whole life may be spent within the area of a metre. If they find a partner, then mating takes place and eggs are laid. If they don't find a partner, no problem, as they are hermaphroditic (they contain within themselves a complete set of both male and female reproductive organs) and eggs will be laid anyway.

Not only do snails have a small geographic area but their lifeline is often restricted to just one year. Egg hatches, snail grows, snail matures, snail creates eggs, snail lays eggs, snail dies, eggs overwinter. Not too complicated, and how much trouble can you get into in just one summer? Apparently lots.

Snails and slugs eat vegetation, and sometimes that leafy green is what you planted in your garden or field. A trip to the garden-protection aisle of the hardware store will provide all sorts of nasty defences against these slime sliders. I did read that drowning them in carbonated water is somewhat humane as this narcotizes and drowns the animals, which is so much nicer than drowning them in just plain water.

With the rainy season dropping in again, you may see snails going out for a morning slide around their neighbourhood, enjoying the damp weather and using that natural layer of moisture to, maybe for those snails with a fitness fetish, pump up the pace to a blistering 1.5 mm per second!

Resolved COVID-19 cases skyrocket in Newmarket
May 28, 2020 11:18 AM
Comments
We welcome your feedback and encourage you to share your thoughts. We ask that you be respectful of others and their points of view, refrain from personal attacks and stay on topic. To learn about our commenting policies and how we moderate, please read our Community Guidelines.