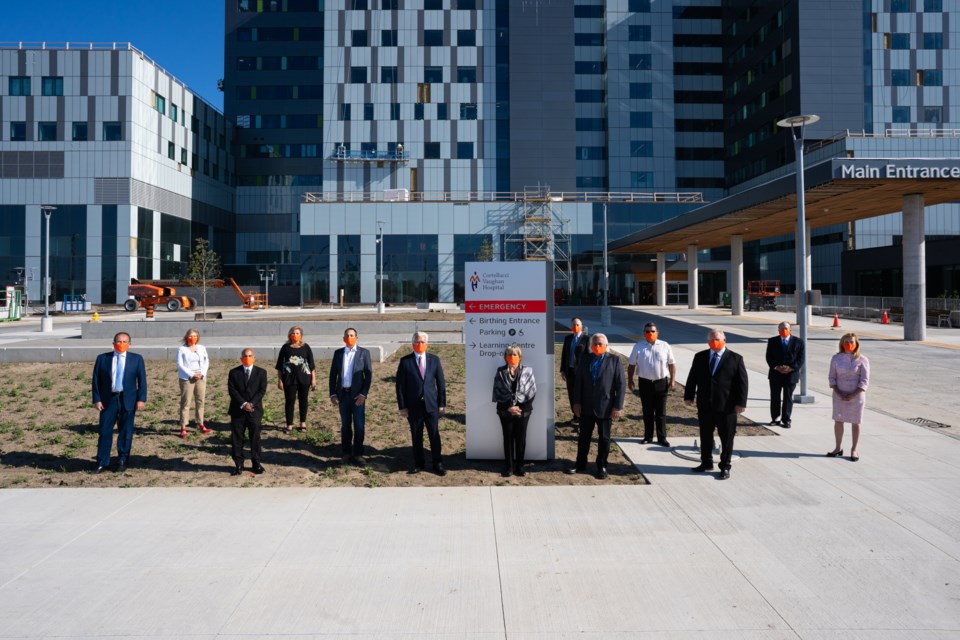 Mackenzie Health unveiled the name of its new hospital, Cortellucci Vaughan Hospital, in recognition of a $40-million gift from the local family. Supplied photo/Mackenzie Health

The name was unveiled today in a ceremony in front of the $1.6-billion hospital, which is scheduled to open early next year, attended by the Cortellucci family, Mackenzie Health leadership and dignitaries that included Premier Doug Ford, Deputy Premier and Minister of Health Christine Elliott, Vaughan-Woodbridge MPP Michael Tibollo and Vaughan Mayor Maurizio Bevilacqua.

“During these unprecedented times, it’s never been more important to invest in our hospitals and give our heroic frontline staff a state-of-the-art place to provide quality care in the community,” said Ford. “We’re incredibly proud to join Mackenzie Health, the Cortellucci family, and partners from every sector to build a world-class hospital in Ontario that will put patients and their families first.”

The hospital — Canada's first smart hospital — will provide much needed capacity in the health system by doubling access to care in the community, according to a Mackenzie Health news release.

The $40-million donation — the largest single donation in Mackenzie Health’s history when announced last June — marks the Cortelluccis' continued philanthropy in Vaughan, including $2 million in 2006 recognized by the naming of the emergency department at Mackenzie Richmond Hill Hospital, $3 million in July 2018 to Hospice Vaughan – The Mario & Nick Cortellucci Hospice Palliative Care Centre of Excellence, and $1.1 million in February 2019 to Niagara University Vaughan.

“Having called Vaughan home for the last 25 years, our family feels profoundly grateful to be in a position to give back to our community,” said the Cortellucci family in a statement. “We're humbled to play a small part in contributing to the creation of a first of its kind smart hospital in Canada, which we hope will benefit Vaughan citizens for many years to come. We also hope this gift embodies the giving spirit of our community and inspires others to join us to transform health care in Canada.”

The $250-million campaign to help build and equip Mackenzie Health hospitals in Vaughan and Richmond Hill has raised $177 million to date. The Ontario government, which has invested $1.3 billion to construct the facility, requires the community to contribute to a "local share" of the project.

“Today’s announcement marks a historic moment in Mackenzie Health’s history and an unprecedented investment in our community,” said Mackenzie Health president and CEO Altaf Stationwala. "The Cortellucci family has demonstrated an incredible commitment to shaping the health care of the future and we’re so proud to honour them in this way.”

Once complete, Cortellucci Vaughan Hospital will increase Mackenzie Health’s urgent and emergent care capacity, provide more advanced diagnostic imaging and enhanced programs in obstetrics, pediatrics and mental health. It provides care to residents across the region with its stroke and chronic kidney disease programs, as well as at the Emergency Domestic Abuse and Sexual Assault (DASA) Care Centre of York Region.

“The Cortellucci family has been a pillar of the Vaughan community for decades, dedicating their lives to giving back,” said Vaughan Mayor Bevilacqua. “This commitment to giving and their dedication to making our community a better place should encourage us all to do the same. Cortellucci Vaughan Hospital will be a landmark for the City of Vaughan and an epicentre of health care excellence for the province.”

COVID-19 Today: A look at the numbers for Newmarket, York Region, Ontario
Oct 21, 2020 10:50 AM
Comments
We welcome your feedback and encourage you to share your thoughts. We ask that you be respectful of others and their points of view, refrain from personal attacks and stay on topic. To learn about our commenting policies and how we moderate, please read our Community Guidelines.