Differently abled hockey player takes 'just do it' to heart

Newmarket resident and Wandering Misfits forward Jessica Lafreniere, who was born with a congenital amputation of her right hand, has always taken her differences in stride
0
Jan 7, 2020 11:30 AM By: Debora Kelly 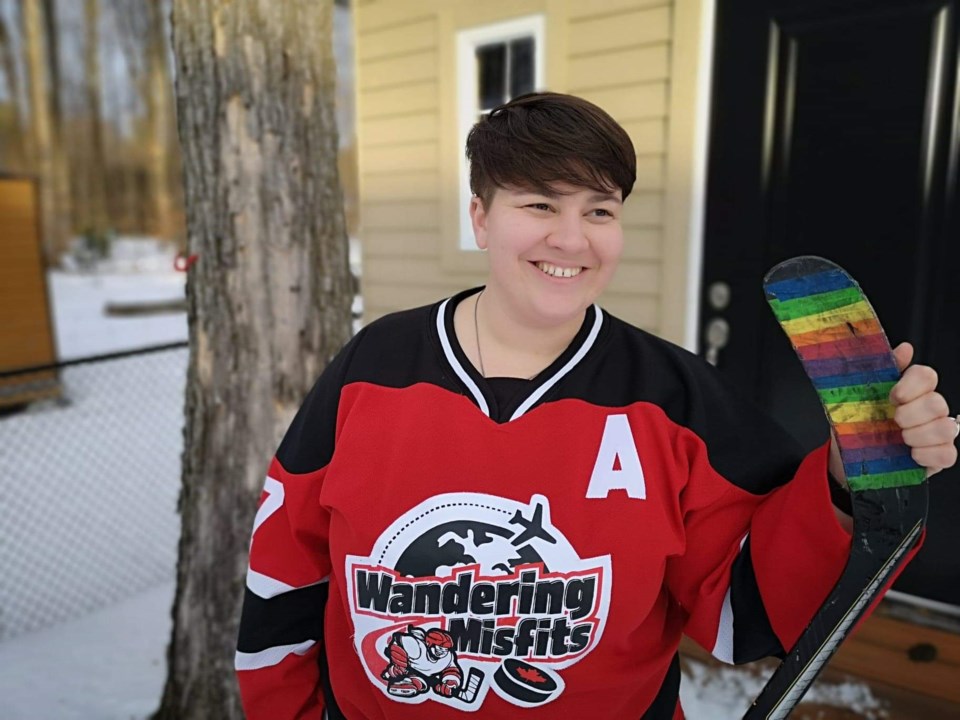 Jessica Lafreniere, who was born without a right hand, has played hockey since she was 11. Supplied photo

Jessica Lafreniere has always taken her differences in stride — though, admittedly, it’s hard to ignore the stares at times.

Being born with a congenital amputation of her right hand didn’t keep her from taking to the ice to play hockey — or doing anything else in life that she had set her mind on.

“People definitely stare, which can be frustrating," the Newmarket resident said. “With kids, I don’t get as frustrated because they are very curious by nature. They will walk up to you and ask what happened."

She understands it’s human nature, however.

“But if I see someone different, I’ll take a couple of glances myself — which is OK because I only have one hand,” she added with a laugh.

Lafreniere, 29, laughs a lot as she talks about her life and her passions.

Hockey, a game she began playing at the age of 11 and continues to play today as a left-wing forward on the Newmarket-based Wandering Misfits women’s hockey team, is at the top of the list.

Born in French River, near Sudbury, her family moved to Oakville when she was three years old, then to Aurora, where her stepfather, Frankie Findlay, encouraged her to play hockey.

Her mother, who had always been protective of Lafreniere, the youngest of her three daughters, had been reluctant at first, she said.

“My mom always babied me — because I am the baby of the family — and, on top of that, because of my hand, she didn’t want me to get hurt or be made fun of.”

Yet mom’s concern never held her back, she said, recalling she has always been active by nature.

“I was the kid that was sitting on top of the fence, climbing everything,” she said with a laugh. “It was a problem.”

Findlay had coached her stepbrother, who played for the Richmond Hill Stars, and never doubted she could do it, Lafreniere said.

As he no longer comes out to watch her play, she said she misses “the constructive criticism” he used to give her after her games.

Lafreniere started playing house league with the Central York Girls Hockey Association in 2011, with a prosthetic that wasn’t specialized for hockey, as her current one is.

Was she conscious she was breaking barriers by taking to the ice as a differently abled player — never mind playing the game at a time when not many girls did?

“No,” she responds firmly. “That’s how I am with everything. If I want to do it, I’ll do it. And I think because I only have one hand, my attitude is stronger toward that.”

As a child, she wore a prosthetic for a few years, but then only when she was playing hockey from the age of 11 on.

“It was just so uncomfortable, and it didn’t do anything, it was just esthetics,” Lafreniere said.

Working with War Amps and Holland Bloorview Kids Rehabilitation Hospital, she was provided with the carbon fibre prosthetic that she now slides into her glove to play hockey.

It has always been her pipe dream to play as a goalie, and she’s now working with them on a prototype prosthetic that could make that a reality.

There isn’t much that she lets get in her way.

However, when she was younger, she recalls being more self-conscious about her hand.

“When I was younger, I wasn’t as comfortable with it, I was hiding my hand more,” she said.

At her job as a bilingual customer service team lead with a natural pharmaceuticals firm, she typically wears long-sleeve tops, she said.

Other than those occasional stares, she has no memories of being ostracized or “made fun of” as a child.

In fact, Lafreniere said she was the one who would often use humour in an attempt to lighten a situation, making jokes about her hand, which would make her biological father cry.

“I would make awkward situations even more awkward,” she said with a laugh. “I would make a hand joke and people don’t know how to react, but I laughed.”

Though, with a smile, she recalled some of the girls she played against quickly figured out that they could hit her stick, which would cause the prosthetic to pop out of its socket and take her out of the game momentarily.

Rather than feeling discriminated against, she said she feels appreciated.

“No, if anything, people are more impressed that you are doing something. ‘Oh, you play hockey? How'?"

Lafreniere isn’t shy to show her hand if asked.

“I will happily educate someone,” she added.

She is conscious of her role as an ambassador for the sport — she’s an official Women’s Hockey Life ambassador — and as a role model for differently abled players.

Her message to young people with physical challenges?

“Don’t second guess yourself, you can do it — even if it takes a little bit longer to do something, or you have to do it differently, which you will likely have to, just do it.”

Without a doubt, she walks the talk on that advice.

“I would love to bring more awareness, not only to normalize for other ‘normal’ people, but also for kids who aren’t ‘normal’ who want to do different things.

“That’s my biggest goal. ...I would have loved someone to mentor me.”

Wandering Misfits was a travelling team initially — “We’re taking on the world, one rink at a time”, states their website — and it also now plays a regular season as a CYGHA senior women’s house league team.

Lafreniere, the alternate captain and team manager, is the youngest player, with the oldest players aged in their 50s, she said.

“We’re working to grow the team, and grow the game for women,” she added.

Her life is full with hockey, a full-time job, courses at college and she recently got engaged.

“That’s something that I thought would be hard, to find someone who is accepting, who’s not judging,” she said. “That’s something I bring up often (to my partner), ‘thank you for being so kind and accepting and loving’.”

In a reflective moment, Lafreniere said she has at times mused if she would want a hand transplant, if that was an option.

“I feel like I would be lost if I had two hands. I don’t know anything different,” she said. “Most things I don’t even think, ‘how am I going to do this if they’re doing it with two hands?' It’s a natural thing for me to just do it.”

Recalling War Amps events she attended with her mother as a child, she said “it really does open up your eyes".

“I am grateful for simply not having one hand. It really could be so much worse.”

Has her physical difference held her back from anything at all in life?

Good morning, Newmarket!
May 27, 2020 6:00 AM
Comments
We welcome your feedback and encourage you to share your thoughts. We ask that you be respectful of others and their points of view, refrain from personal attacks and stay on topic. To learn about our commenting policies and how we moderate, please read our Community Guidelines.