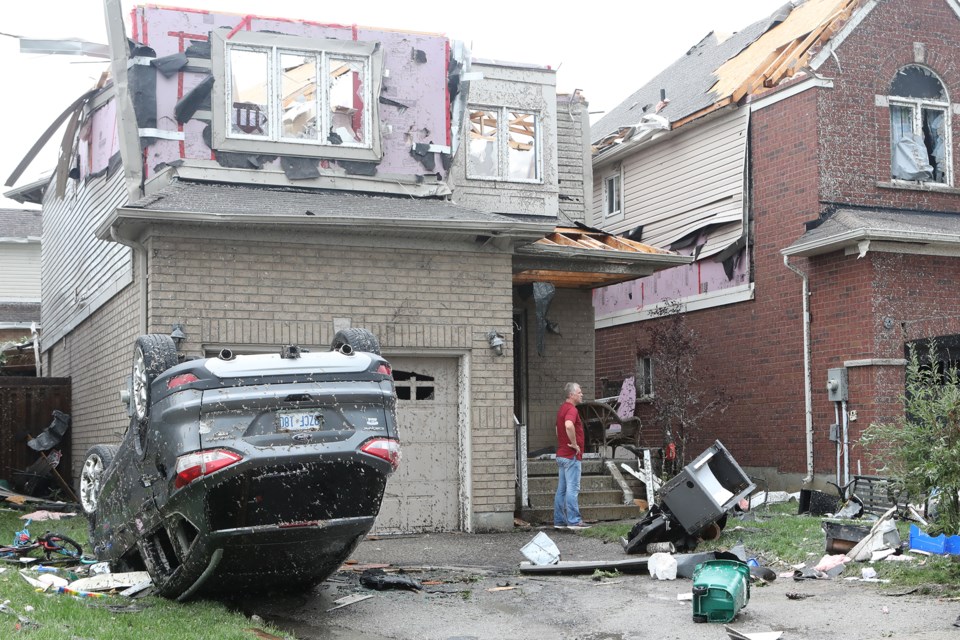 A tornado touched down in south-end Barrie on Thursday, July 15, tearing the roof off this home. Kevin Lamb for BarrieToday

Would so-called hurricane strapping have prevented some roofs from blowing off houses during last Thursday’s tornado in south-end Barrie? It depends on who you ask.

Hurricane strapping connects and strengthens wood-framed roofs and houses, with the most common ones made of galvanized or stainless steel. They are designed to help protect structures from severe weather.

Paul Meredith, first vice-president of the Simcoe County Home Builders’ Association and a construction manager by profession, said there are two arguments.

“It’s something that chief building officials all across Ontario have discussed at length previously,” he said. “For the cost of the hurricane straps, yes. And the short answer is yes, you’d think it would make sense.

“However, would it cause the house to further collapse more? If the hurricane straps were on there, it could have caused a potential collapse, in which case people would be trapped or injured inside the home, so there’s an argument both ways.”

Meredith says hurricane straps are not mandated by the Ontario Building Code, but they are an option.

A truss is a pre-made wooden structure that integrates a triangular webbing to provide support for the roof above, while tying the outside walls of the house together.

Ontario’s Ministry of Municipal Affairs and Housing says there are a number of factors to consider.

“The building code currently includes provisions requiring roof structures on buildings to be attached to the supporting walls in such a manner that they can resist up-lift forces,” he added. “The code also sets minimum prescriptive requirements regarding tying down different building components — including roof rafters, trusses and roofing sheathing — in houses and small buildings.

“For larger buildings, the code sets the minimum wind loads that a building must be designed to resist, based on the geographic location and other factors that affect the wind forces that the building is expected to experience during its service life,” Carter said. “These requirements are based on requirements in Canada’s National Building Code.”

So there’s no absolute answer to the merits of hurricane strapping in severe weather. Wind speeds reached 210 kilometres an hour in Thursday’s tornado, according to the Environment and Climate Change Canada (ECCC).

“There is a difference between meeting the building code, which defines minimum construction requirements, and building to be tornado resistant — which is a standard much higher than specified in the building code,” Andrea Miller, Barrie’s general manager of infrastructure and growth management, said on Monday.

“It is unreasonable to expect a roof to resist tornado-strength winds and resulting forces when they are not required to be designed for that," she added.

However, Greg Kopp, a wind engineer with Western University’s Northern Tornadoes Project, found that some of the roofs weren’t attached properly to the walls and that he believes the building code was not followed.

“We know we don’t live in hurricane zones, but what would it take to ask builders to put hurricane straps in roofs and upper floors,” he said. “I mean, there’s only about 25 or 30 cents to put them in, although maybe the labour is extra. It does provide that extra level of protection.”

Barrie Councillor Natalie Harris, who rode out the tornado in a house that lost its roof, sai8d she has discussed this problem with Kopp, an engineering professor with Western University and lead researcher with The Northern Tornadoes Project. Harris said she will bring this issue to city council, which next meets Aug. 9.

“Tentatively, I will be requesting that the Ontario government change the Ontario Building Code to include mandatory hurricane straps in areas where tornadoes are evident,” she said Monday, “and that the City of Barrie add a clause that all new building projects must include hurricane straps as recommended by Mr. Kopp.”

City officials say they won’t know the number of houses damaged by the tornado until full assessments are done.

A total of 75 unsafe orders were issued, and as of Sunday at 6 p.m., eight had been removed.

Unsafe orders have been issued and will be posted on homes that have suffered extensive structural damage, part of the city’s obligation under the Building Code Act.

The number of buildings determined to be unsafe will change as more detailed information becomes available regarding the damage to the structures. A professional engineer will need to assess damage to each property.

A severe storm, high winds and a possible tornado touched down along the northern edge of Sandycove Acres in Innisfil on Thursday afternoon. There were no injuries reported.

About the Author: Bob Bruton