Cancellation of winter varsity sports comes as no surprise 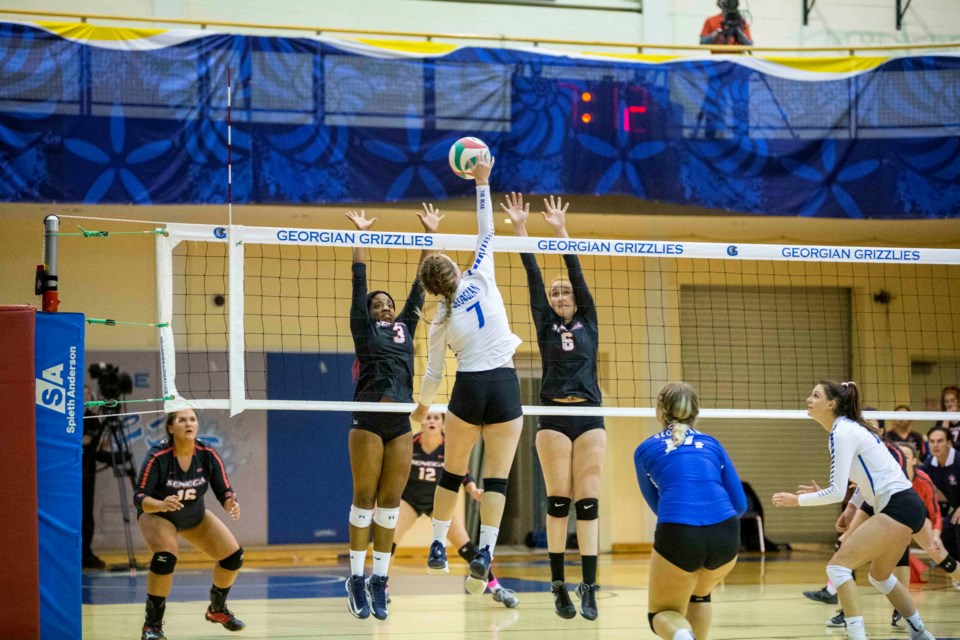 The Georgian Grizzlies women's volleyball team is shown in action during the 2018 season in this file photo.

The Ontario Colleges Athletic Association (OCAA) has announced that the 2020-21 winter varsity season has been cancelled.

The decision was made in response to the ongoing COVID-19 pandemic and the sporting restrictions in place across the province.

Sports affected by the cancellation of the winter schedule include badminton, basketball, curling, indoor soccer, and volleyball.

Georgian College men’s volleyball head coach Reid Saxby and his team finished with a bronze medal at the 2019-20 OCAA championships in February and were looking to continue their winning ways.

“It was the first medal in Georgian volleyball, ever," Saxby said. "We really wanted to build on that this year and I feel we definitely could have as we’ve finished in the top four in three of the last four years."

OCAA president Nathan McFadden said in a statement that there are "far too many obstacles" for the OCAA to operate while providing a safe and quality varsity experience for its student-athletes.

Saxby agreed. He said everyone saw it coming and there's a safety-first mentality throughout the team.

“I’ve spoken to some players since the announcement came down and no one was surprised," he said. "Everyone was understanding, as am I. We are not out of the woods yet with this and we need to be cautious.”

The volleyball team would have been nearly through tryouts by now and getting ready for the season to start at the end of October. The season’s first half is until December and the second half starts up again in January until provincial championships at the end of February or beginning of March.

“I really feel for the players the most,” Saxby said. "They put so much effort into getting ready. I’ve been involved with varsity sports for 20 years and it really is a highlight for any student-athlete. I wouldn’t doubt that we lose some players to this.”

Although there will not be sanctioned varsity competition this winter, some OCAA member schools may still allow unofficial sports opportunities in their facilities within the parameters set forth by governing sports organizations and local health officials.

These decisions will be made at the institutional level, though the Georgian athletics website has stated they are closed until further notice.

"The OCAA will return stronger from this due to our current strategic initiatives that are already underway," McFadden said. "The future viability of our sports are going to be more important than ever before to enhancing the post-secondary educational experience and we look forward to uniting our student-athletes, campuses and communities together in sport."

Shawn Gibson is a staff writer based in Barrie
Read more

Community tips lead to arrest in series of hate-motivated incidents in Vaughan
Oct 21, 2020 9:49 AM
Comments
We welcome your feedback and encourage you to share your thoughts. We ask that you be respectful of others and their points of view, refrain from personal attacks and stay on topic. To learn about our commenting policies and how we moderate, please read our Community Guidelines.