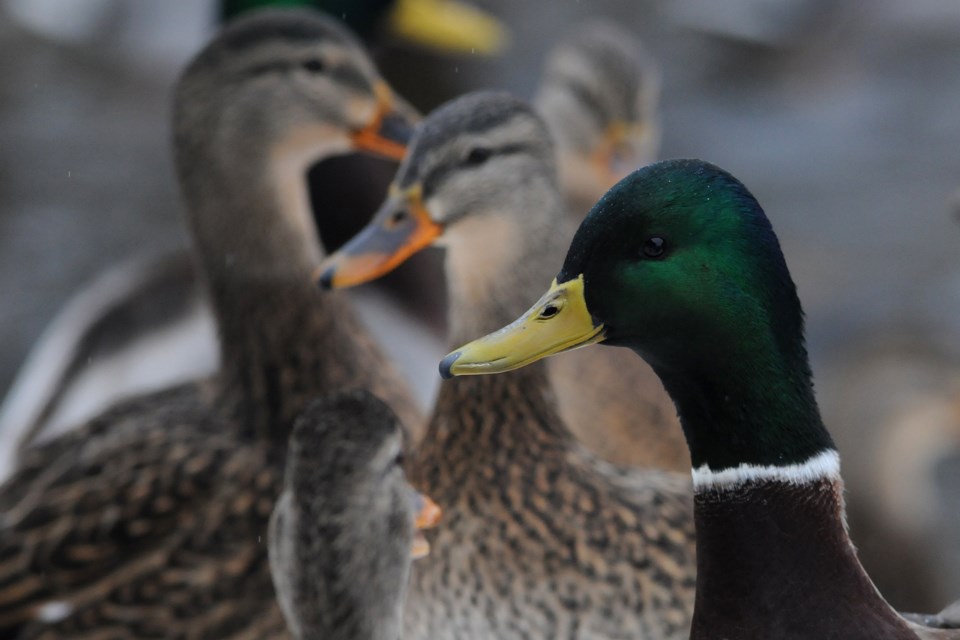 Banding a duck is a little like giving it a licence plate that leads to the ability to collect a lot of information. David Hawke/OrilliaMatters

Once upon a time in my personal timeline, Sept. 25 held a special meaning: it was the carved-in-stone official first day of the fall hunting season. Ducks, geese, grouse, rabbits... you name it and me and my buddies were probably licensed and loaded for it.

But that was then and this is now.

A lot has changed over the past few decades, including hunting regulations that requires the guidance of a seasoned lawyer to get you an answer for a simple question.

"Opening day" could be any number of dates, depending on where you live, where you hunt, what you seek and how you plan to conduct your hunt. My shotgun is long gone, having been replaced by a camera and telephoto lens.

For a few years, I was contracted to operate a waterfowl banding station at the Tiny Marsh Provincial Wildlife Area, near Elmvale. There had been banders before me, and banders after me, but for a few glorious seasons I handled literally a thousand birds a year, outfitting each with a small aluminum 'licence plate' on their legs.

These metal bands were going to give us curious humans an insight as to the life of a duck (or more accurately stated, the death of a duck).

A banded bird does not tell you much until you hear from it again; then you can plot time lapsed and distance to new location.

There was one of two ways a duck could check back in... either it was shot by a hunter and the recovered band was sent in, or another bander captured it briefly and recorded the engraved number into their data book.

The whole reason behind banding waterfowl is to hear from them again, and to then plot another dot on the map.

Because ducks are actively hunted, the chances were good that a number of bands would be found on those harvested ducks, and hopefully the data sent back in. The rate of return was pretty good, around 25 per cent, compare that to a song bird bander who is delighted if even one per cent of the birds are recovered.

So, what did we learn about where ducks travel and why? As the ducks flew south on migration, a barrage of hunters lay in wait all along the route. Bands are collected daily along the whole flyway and the retrieval information is (hopefully) sent to a central computer in Maryland.

When I was doing this project in the mid-1980s, computers had not yet become household items. So I wrote to the Maryland office and requested all their files that showed where our Tiny Marsh ducks had reappeared. A few weeks later a large ream of 'tractor feed' paper arrived in the mail.

A large paper map of North Americas was acquired along with a few sheets of colourful sticky dots, and then with great scrutiny each line was deciphered to find the date of banding and the date and location of the return info. Dreadfully slow. Incredibly exciting.

Slowly, the map became covered in dots, several up and down the St. Lawrence Seaway, most spilling over into the upper United States. I had to make clear plastic overlays, as the original map quickly became obliterated in some areas. A new colour for each year, another colour for each species, sometimes a colour to indicate if it was male or female, adult or immature.

At the end of it all, some really cool info came out of it.

"Our" local ducks tend to split their routes around the Great Lakes, with those who flew more or less straight south going into the Mississippi Flyway, and those that went east tended to ride through on the Atlantic Flyway.

The clusters of map dots began to reveal secrets of the duck world.

Mallard ducks tended to drop into the agricultural fields of Tennessee and the Carolinas for winter food and socializing.

Mallards from Ontario mingled with mallards from Saskatchewan and the Dakotas. The following spring the females returned home to their wetlands of birth... and the males followed the cutest set of tail feathers they could find.

And so we learned not only of flyway routes but also of genetic mixing, whereas the western 'boys' would meet up and mate with the eastern 'girls', and vice versa for our home-grown boys.

Not only was this fun science, but huge habitat funding programs were built around knowing that money invested in Ontario habitat work would ensure a good-sized population of ducks each year in United States. Hoo-rah.

The smaller blue-winged teal proved quite surprising, as they did not tarry in the fields of the eastern seaboard; it was on to Cuba and beyond for these birds! Bands were recovered in all the Caribbean Islands, and a couple even from South America. To think our little local ducks would have such a far-reaching travel agenda was mind-boggling.

And so Sept. 25 is looming yet again, but my youthful excitement has waned.

However, the thrill of the hunt has been replaced by something else... the knowledge that these birds know what they are doing, that their migration is a hard-wired thing to do, a way of avoiding certain death if they tried to remain over the winter months.

The ebb and flow of life along the flyways, through the seasons, will continue. They may be going south for now, but come a nice spring day next year, they'll be back.