'We certainly will have to learn from this with regard to what we do at other sites... All eyes are watching us right now,' says Dr. Charles Gardner, Simcoe Muskoka medical officer of health
Jan 23, 2021 6:55 PM By: Raymond Bowe 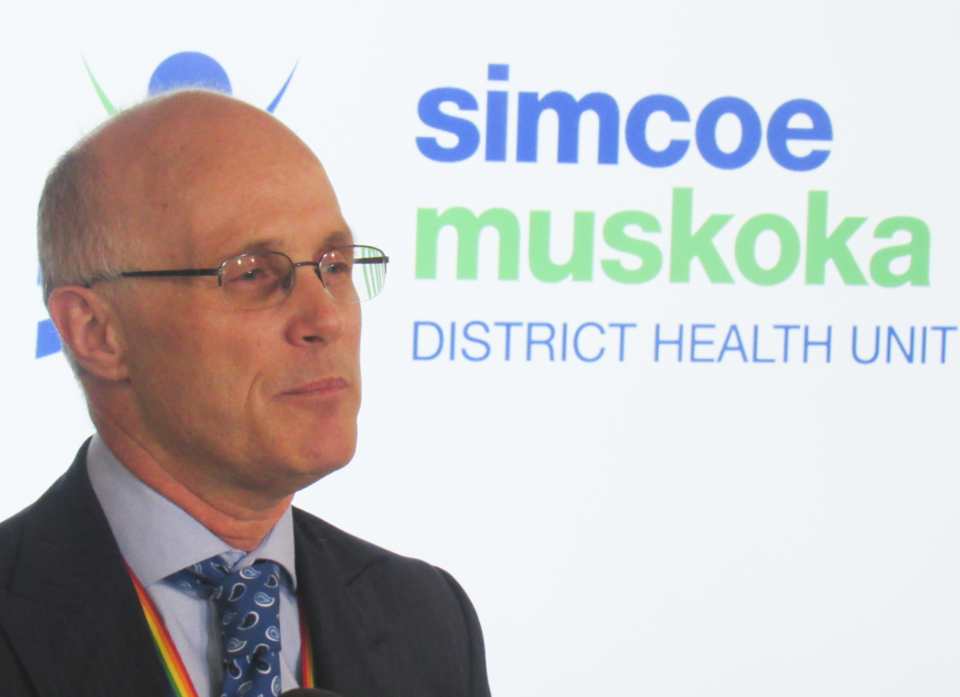 As more details emerge about the presence of the United Kingdom variant of COVID-19, it could also mean more changes to protective measures in long-term care homes, the local community, and abroad.

On Saturday, public health officials confirmed the more virulent U.K. B.1.1.7 variant is present at Roberta Place in south-end Barrie, where the death toll has now reached 32.

"We need to keep learning about this virus as we go," he added. "I have no doubt that, with this variant, we're going to continue to have to change and tighten up requirements," said Dr. Charles Gardner, medical officer of health with the Simcoe Muskoka District Health Unit.

All but two of the 129 residents have tested positive for the virus, as well as 84 workers, which represents approximately half of the entire staff. Six residents and one staff member are currently hospitalized at Royal Victoria Regional Health Centre.

"All eyes are watching us right now," the doctor added.

The outbreak at the 137-bed Roberta Place long-term care home was first declared on Jan. 8.

This week, it was reported that a worker may have brought the virus into the Essa Road facility after being in contact with an international traveller. Gardner was asked if charges could be laid if someone wasn't following quarantine rules.

"When we look at the situation, we actually don't see violation of any of the recommendations from the province, nor was there a violation of the Quarantine Act with regards to the individual who was travelling," he said Saturday during a Zoom call with reporters. "So the exposure in question did not take place out in the community."

The staff member who contracted the virus did not show symptoms when they went to work, the doctor noted.

"They were asymptomatic when they were tested routinely," Gardner said.

Public health officials have been reluctant to release any information that could identify either the staff member or the traveller, but Gardner did confirm traveller is a resident of Simcoe-Muskoka.

"There's no requirement to be in isolation and not go into work solely because one has been in contact with a traveller who's asymptomatic," Gardner said.

Questions have also been raised about staff at Roberta Place going between rooms of residents who were positive for the virus and others who were not.

"I would agree that the home never successfully put in place the kind of cohorting... where you maintain the restriction on the movement of staff, or the exposure of staff to cases and non-cases," Gardner said. "That was something that certainly was not the optimum practice in an outbreak and that wasn't established, in part because of how quickly this spread and in part because the number of staff that became ill, they had such a difficulty maintaining the adequate staffing in the first place."

Cohorting is a strategy to reduce risk of transmission by assigning health-care workers to patients or groups of patients based on patient exposure or infection.

Gardner said it can be "challenging" to do that, however, during a fast-moving outbreak.

"This moved very quickly," he said. "There were 40 cases that emerged over the course of a single weekend at the very beginning. The rapid pace made it difficult to put those measures in place."

David Jarlette, president of Jarlette Health Services, which operates Roberta Place, said the virus came into the long-term care home so quickly they weren't able to achieve cohorting "in a quick and timely fashion."

With so many staff and team members infected at Roberta Place, Gardner said they have had to take a multi-faceted approach to ensure staffing levels are sufficient at the facility. Jarlette Health Services has reallocated staff and also brought in temporary workers from outside organizations, such as the Red Cross.

An occupational health and safety team has been formed involving the health unit and other health-care partners. They also want to make sure all employees are offered the vaccine, Gardner said.

"From what we have seen, the uptake for this has been very, very strong, but we need to continue that as new people come into the facility," he added.

There will be ongoing monitoring at Roberta Place through rapid testing by Orillia Soldiers' Memorial Hospital, which has been granted temporary leadership of the long-term care home following an order under the Health Protection and Promotion Act. Testing will be done on a twice-weekly basis. Anyone who shows symptoms or who has a positive result will be placed in isolation at home, or hospitalized if needed.

Gardner said they hope to contain the variant to the site and limit spread into the community. This includes "a more strict threshold" for people who are at higher risk and more intensive follow-up. In cases where the person cannot isolate at home, they could be put up in a hotel to reduce the risk of spread to household members, he added.

"Our goal is to avoid transmission into the community," the doctor said.

"It's certainly on the edge," he said. "It would depend on their contacts beyond their household and whether or not we're starting to see spread there. We haven't seen that yet, but we're on the very edge."

If outbreaks are seen at other facilities, Gardner said he will have the genome sequencing done to determine whether the variant is showing up in those other facilities.

With the local emergence of the U.K. variant, Gardner said additional protocols and protective measures have been put in place.

In regards to Roberta Place, case and contact management has already changed to identify people who are considered high risk.

"If in fact there's been an exposure that's just momentary, rather than 15 minutes or more, we're considering that a high-risk contact and those individuals go into isolation or quarantine," Gardner said.

As well, people in full protective gear who have been in a confined space for more than 30 minutes with an infected person, they will also be considered a high-risk exposure. The isolation period for such instances is being extended from 10 days to 14.

Gardner said the situation at Roberta Place will have a "profound" effect on other long-term care homes.

The immunization of all residents retirement homes is another immediate change in protocol at long-term care homes, Gardner said. Last weekend, vaccinations were completed for all residents of long-term care homes in Simcoe-Muskoka. That focus has now shifted to retirement homes in the region. There are still 16 homes to go, which Gardner expects to be done by Wednesday.