'It was just me, my motorcycle, the elements, and many thousands of kilometres to home'

With his trip to South America cut short by the pandemic, Bradford's Lukas Robert King talks about his race against border crossings to arrive home safely
Apr 1, 2020 5:00 PM By: Natasha Philpott 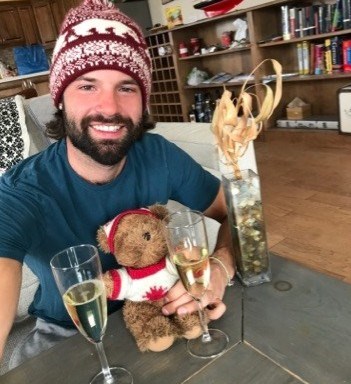 Lukas Robert King is back home in Bradford, along with his travel partner, Baby Bear. Submitted photo

The 28-year-old left for South America mid-December with plans of returning home by end of April, the COVID-19 pandemic quickly changed those plans.

When the World Health Organization declared coronavirus a global pandemic on March 11, King was in Mexico, already on his way home. He realized he needed to expedite his ride before borders started to close in Mexico, U.S. and Canada.

"I rode across Mexico in just over a week. Taking roads I maybe not should have been taking. (I) took them because it was faster but definitely more dangerous, but I’m still alive," he said.

He made it to the U.S. border three days before it closed.

With nothing but a motorcycle and a bag of clothes and essentials, King had difficulty finding places to stop or recharge. Many campsites and restaurants were closed, and he spent most nights camping in the woods.

"Going through the States was really hard. It was hard physically in the sense that there was constant rain and it was really cold. Texas had already gotten tornadoes and hail. There was snow in the Midwest," he shared.

"Normally it wouldn’t be that bad but there was nowhere to stop and actually warm up," he explained. "No coffee places. No restaurants. It was just me, my motorcycle, the elements, and many thousands of kilometres to home."

He said it was sad seeing so many businesses closed and boarded up.

"A lot of these communities were struggling even before COVID-19," he said. "To see them now seems to make the underlying socio-economic problems so much more visible."

Along his route, he said he met many Americans who had lost their jobs due to the crisis and in turn, their health-care benefits. He said he could sense the panic in America.

He said he came across many international travellers, also known as 'overlanders', who had their own vehicles in the U.S.

"I know of some who simply abandoned their vehicles because it would have cost more to store it and they couldn’t find a buyer in time for them catching a flight," he explained.

He contemplated following suit, but in the end, thought it was best to just ride home.

"It seemed to be the safest way for me," he said, noting there was still a risk had he taken a flight and caught the virus in a crowded airport.

"And it is also just part of the adventure," he said. "I spent so many months being self-reliant: camping, fixing my own motorcycle, making my own food. COVID-19 was just another obstacle to overcome. Yes, it disrupted my plans but I’m thankful that I got to experience that."

His last day in the U.S. was on Saturday, where he ended up in a small town in Pennsylvania and the weather was wet and cold.

"I rode two hours to Buffalo and my body was just so cold and wet that I wanted to give up right there," he said. "I wanted to give up, get a motel and dry off for the day. The plastic bags I wrapped around my hands and feet helped somewhat but my boots and hands still managed to get all wet."

Once he made it to Buffalo and he saw the sign to Canada, he got a second wind. "I figured, it’s only another two hours from Buffalo. I can make it."

After the adventure, he is happy to be back at home, and his family is happy to have him home safely.

"My family was worried about this entire trip from the beginning. When COVID-19 happened, it made them even more worried," he explained. He said he had checked in whenever possible, but it was hard as cellphone services was limited.

When he finally made it back to Canada, he collapsed from exhaustion.

"I crossed the bridge, got to the passport booth and then crashed," he said. "My body was so exhausted."

He said the border agent was quite concerned for his well-being and helped him lift his bike back up from the ground and asked if he was OK. She also asked if he had any symptoms of COVID-19, which he didn't.

"She explained that I need to ride straight home and go into quarantine and then simply said, 'Welcome home'."

Now that he has been home for a few days, he has had some time to reflect on his journey, which has taught him more than he could have imagined.

He realized how connected the world really is. How one virus can spread so quickly around the whole world.

"There will come a time when the world can get back to normal and I can ride somewhere with my bike. But in the meanwhile, I’m comfortable on my couch."

Bradford biker racing home from South America through COVID-19 pandemic
Mar 22, 2020 8:45 AM
Comments
We welcome your feedback and encourage you to share your thoughts. We ask that you be respectful of others and their points of view, refrain from personal attacks and stay on topic. To learn about our commenting policies and how we moderate, please read our Community Guidelines.