As the COVID-19 pandemic escalates, local friends and an MP are advocating for the Canadian government to help Robert and Lisa Thiessen and their two sons return from Ghana
0
Mar 26, 2020 11:20 PM By: Natasha Philpott 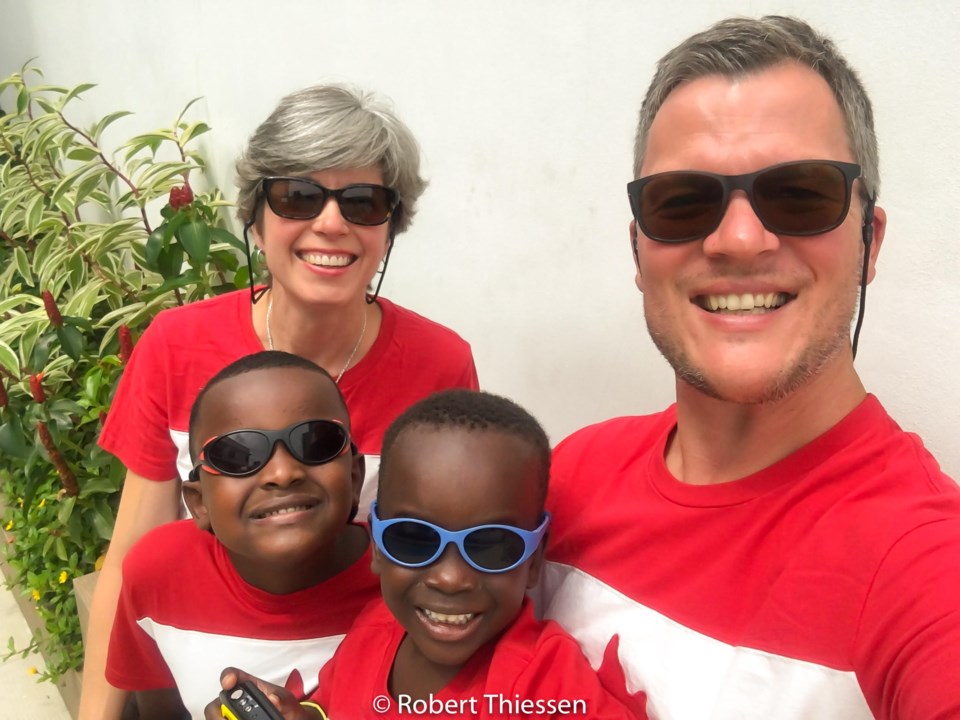 The Thiessen Family are living in Ghana, waiting for a visa for their youngest adopted son, Samuel, to come back to Canada. Submitted Photo.

An area family is desperately trying to get home to Canada with their recently adopted son.

Robert and Lisa Thiessen, and adopted seven-year-old son Solomon, arrived in Lagos, Nigeria in July 2019 as part of the journey to adopt a second son, three-year-old Samuel.

They knew from the start that the adoption process would be lengthy, and were prepared to stay in the country for as long as necessary. But now, more than eight months later and with the ever-evolving COVID-19 pandemic, the family is desperately trying to get home to Canada.

The hold-up has been the need for a visa for Samuel. “We have been in Ghana since Sept. 9, 2019, waiting for the Canadian Immigration here at the Canadian High Commission to verify the adoption paperwork of our son," explained Thiessen.

In September, Samuel was granted a passport, which allowed the family to do some travelling, although, Thiessen noted, they were limited as to where they could go.  “It has to be a place where your Nigerian child can go to without a visa," he explained.

The family decided to move to Ghana, to be closer to the Canadian High Commission in Accra, and rent an apartment until the visa was approved.

At first, they took advantage of their time together, supporting Lisa's home school curriculum by visiting places like Mole National Park and Elmina Castle, off the coast of Ghana. But with the passage of time, concerns have mounted over the length of the delay, and the impact of COVID-19 travel bans.

“This is outrageous, that Canadian Immigration would make Canadian families wait over six months to take a look at their file,” Thiessen said in a FaceTime phone call Wednesday.

He said he isn’t sure of the reason for the lengthy delay, but when he returns to Canada he plans to strongly advocate for Canadian citizens to get priority in situations like this.

Meanwhile, the COVID-19 pandemic continues to spread and escalate. In Ghana, as of March 23, 52 cases of the disease were recorded.

Thiessen and his family have put themselves into quarantine in their gated apartment. Robert is the only one who goes out, to get supplies and groceries, although he said the town is safe and they are "starting to feel like locals here."

Thiessen said the African government has been doing a good job, protecting its citizens from COVID-19 by closing the borders and emphasizing social distancing. But he noted it is hard for some countries to follow the social distancing model, and in local news, citizens have been pressing the government to go into full lockdown — something that has him concerned.

“If they do enforce it, it would be more draconian than in the West,” Thiessen said.

In the meantime, he has enlisted friends and family members in a letter-writing campaign, asking for help in speeding up the process. Thiessen, a member of St. John's Presbyterian Church in Bradford, especially thanked Kawartha Haliburton MP Jamie Schmale and friend and former Sunday School student Jonathon Scott for their efforts and advocacy.

“The (government) offices are closed because of COVID-19, so we have to keep the pressure up,” he said. “We don’t want to shame anybody, we're just asking for help.”

Thiessen said that in the past few weeks, at least 60 people have got in touch with their MPs, and he is starting to hear a response from the government on their application status. Thanking all of those who have pressed the government to expedite the process, he said that the family now hopes to have Samuel's visa processed in the next few days, and head for home once Ghana reopens its border to international flights.

“Optimistically, if we can get the visa in a couple days time, I think we should be on a plane when the two-week border shutdown comes to an end," he said. "That’s if they don’t do further lockdowns. Then we’re at the mercy of the Canadian government."

Although the family has enjoyed their time in Ghana, they worry about the infrastructure of the country.

“Ghana has proven itself to be quite a safe country. It’s been really good and we’ve been out and about," said Thiessen, but he worries about the safety of his family should food shortages develop "and people go into survival mode."

He is also concerned about the availability of health care, if he or any of his family members become ill.

Robert and Lisa sold their home in Alliston in January 2019, putting all their belongings into storage. They lived with family in Cannington until they left for Nigeria last July.

“We were prepared to stay here for a year, if we had to,” Thiessen said, but admitted they started getting homesick around Christmas time.

He noted that as a Canadian citizen during the COVID-19 crisis, he and his family have been able to  “jump the queue” but for now, they are still waiting.

Upon their return to Canada, the family plans to live in a short-term rental house in Newmarket or Bradford until they can find a more permanent rental property to call home.