Court heard Douglas Ross was upset over what he thought was a lost sale to Experience Nissan in Orillia
Jun 17, 2019 1:23 PM By: Shawn Gibson 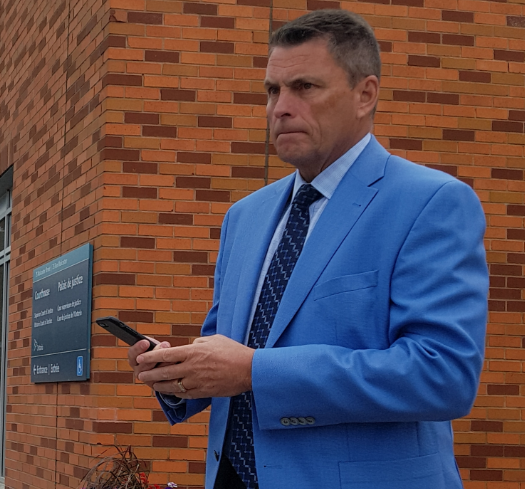 Douglas Ross leaves the Barrie courthouse after pleading guilty on June 17, 2019 to mischief for keying a vehicle at an Orillia Nissan dealership. Shawn Gibson/BarrieToday

BARRIE - The former Barrie Nissan general manager accused of keying a vehicle at an Orillia dealership pleaded guilty today to one count of mischief at the Barrie courthouse, receiving a suspended sentence.

Douglas Ross, a 60-year-old Springwater Township resident, admitted causing more than $6,000 in damages to a 2018 Nissan Pathfinder, following an incident shortly after 7 a.m. on Jan. 4, 2019.

Today, Ross received a suspended sentence with probation for 12 months and was ordered to attend rehabilitative counselling.

Defence lawyer Mitchell Eisen said his client just wanted to move on from the incident.

“He entered a guilty plea because he acknowledged that he had done that. He was under a number of stresses, some personal and some business-wise," Eisen said.

The court heard that Ross, who was the general manager of Barrie Nissan but has since lost his job at the dealership, was upset over a sale that he believed the Experience Nissan dealership in Orillia had stolen away from him.

According to the details read out by the Crown, Ross thought he had completed a sale with a customer, who returned to cancel the deal after being lured away by the Orillia-based Nissan dealership.

This, along with other stress factors, is what led to the car-keying incident, court heard.

In November, Experience Nissan staff arrived at the Commerce Road dealership in Orillia to find a number of vehicles had been scratched. There were no security cameras on the premises at that time, but some were installed in case it happened again.

It did and the footage was turned over to police.

Ross was initially charged with three counts of mischief over $5,000, but only pleaded guilty to one count. During a previous pretrial meeting, the other two charges were dropped.

ONTARIO: Emergency orders amended to permit some covered outdoor dining areas
Jul 3, 2020 9:47 AM
Comments
We welcome your feedback and encourage you to share your thoughts. We ask that you be respectful of others and their points of view, refrain from personal attacks and stay on topic. To learn about our commenting policies and how we moderate, please read our Community Guidelines.

Shawn Gibson is a staff writer based on Barrie
Read more