Auschwitz survivor who was just 2 at liberation nurses scars

MUNICH — Only 2 years old and so ill she had to stay on for weeks after liberation, Eva Umlauf was one of the youngest prisoners to be freed from Auschwitz.
0
Jan 22, 2020 8:51 AM By: Canadian Press 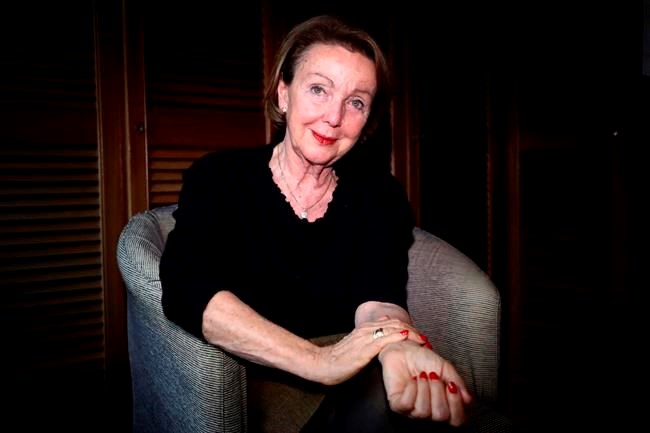 MUNICH — Only 2 years old and so ill she had to stay on for weeks after liberation, Eva Umlauf was one of the youngest prisoners to be freed from Auschwitz.

Although she has no conscious memories stretching so far back, her early childhood in the Nazi death camp was to cast a dark shadow over her entire life.

“Auschwitz is deeply burned inside my body and soul,” Umlauf said on a January day almost 75 years after Auschwitz was freed by the Soviet Red Army. A petite woman with a pageboy haircut and eyes as blue as the camp tattoo on her arm, the 77-year-old doctor reminisced about her post-war childhood.

“There was an emptiness growing up after Auschwitz, so many of our family members were gone," she said.

"It was just my mom, my sister and me who survived," Umlauf added in a calm, measured voice, sitting in her elegant apartment on the outskirts of Munich. “We saw my father for the last time at the ramp at Auschwitz when we were taken off the train.”

It's a miracle that Umlauf survived the death camp i n German-occupied Poland. More than 1.1 million people, mostly Jews, were murdered there by the Nazis and their henchmen. In all, about 6 million European Jews died during the Holocaust.

When families from across Europe reached Auschwitz in cramped windowless cattle trains, the Nazis selected those whom they could still use as forced . The others, old people, many women and especially children and babies, were gassed to death soon after arrival.

But the gassing stopped two or three days before little Eva, her pregnant mother and father arrived in November 1944 f rom the camp Novaky in Slovakia. Germany was losing World War II and the Red Army was drawing ever closer to the camp.

“Our transport was the first one that didn't go straight to the gas,” Umlauf said.

She was still tattooed on arrival — and promptly fainted. The blue number on the inside of her lower left arm remains visible today: A-26959.

The trained pediatrician and psychotherapist still works in her own practice a few times per week. While many other remaining Auschwitz survivors are frail and ailing, Umlauf is energetic and active even though she has also suffered several severe illnesses — likely effects of her months in Auschwitz.

When Auschwitz was liberated on Jan. 27, 1945, Umlauf was very sick. A fellow prisoner and pediatrician who looked after her at the hospital ward, told Umlauf's mother Agnes Hecht: “Forget your child, she won't survive.”

But Hecht, who had lost her entire family in the Holocaust, was unwilling to give up on her daughter. She stayed on at Auschwitz for several weeks after liberation because Eva was too weak to even walk. She also gave birth to Eva's younger sister Leonore there, and finally, one summer day in 1945 when Eva was a bit healthier, she took the two little girls back to her home in Trencin, western Slovakia.

“We lived a seemingly normal life,” Umlauf remembered as she looked through old black-and-white family photos that are the only tangible reminders of those missing.

“My mom barely talked about the Holocaust and I never asked questions,” Umlauf said.

Nevertheless, the loss was unmistakable. When other children went to visit their grandparents during summer vacations, Eva and her sister stayed at home with their mother — they didn't have any grandparents.

When a young Christian mother in Trencin died in childbirth, Umlauf's mother stood on the curb watching the funeral procession and muttered, “They should also know what it's like when you lose somebody, I'm glad they also get to experience what that's like.”

And once the mother told her daughters, “I'd give an entire closet if only one of my relatives would come back.” Agnes Hecht had been born into an affluent Jewish-Slovakian family, but its fortune was lost in the war and she was very poor. For her, a closet was her most precious possession.

Despite growing up in poverty and often falling ill, Umlauf did well at school and was able to study medicine at university in Bratislava. In 1967, she moved to Germany to join her husband, a Polish Holocaust survivor who had settled in Munich.

At that time, the memories of Auschwitz were mostly subdued by daily routine — building a home, raising her children and working in the hospital. But off and on the horror would force its way to the surface. When Umlauf was pregnant with her third child, she had nightmares of babies being thrown into fire alive and gas chambers full of dead babies. Still, it was only after her three boys had grown up and she had semi-retired that she finally turned her full attention to the silenced past.

Umlauf to archives across Europe and Israel to seek glimpses of the fates of the family members she was never able to meet. In the end, she wrote her autobiography, which includes stories about relatives who perished in the Shoah. It was published in 2016 in Germany under the title, “The number on your lower arm is as blue as your eyes" — a line from a poem a fellow survivor and friend wrote about her.

"There are a lot of dead I have to live with,” she said. “It made me fall terribly ill when I was writing.”

However, the project also brought closure.

“The book was healing, not just for me but for my entire family,” she said.

As Holocaust survivors from around the world prepare to travel back to Auschwitz for Monday's commemorations of the camp's liberation, Umlauf has decided to also return for one last visit, together with her three adult sons.

See all of the AP’s coverage of the 75th anniversary of the liberation of Auschwitz at https://apnews.com/Auschwitz

Boyfriend of British TV presenter heartbroken by her death
Feb 16, 2020 6:54 PM
Comments
We welcome your feedback and encourage you to share your thoughts on this story. We ask that you be respectful of others and their points of view, refrain from personal attacks and stay on topic. To learn about our commenting policies and how we moderate, please read our Community Guidelines.