ATLANTA — With fewer than 40 days left before the election, President Donald Trump unveiled his second policy plan in as many days as he tried to chip away at his Democratic rival’s support among Black and Hispanic voters and in key battleground stat
Sep 25, 2020 10:28 PM By: Canadian Press 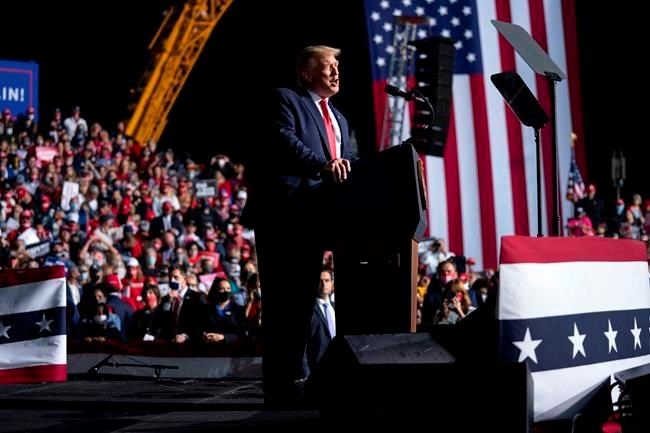 ATLANTA — With fewer than 40 days left before the election, President Donald Trump unveiled his second policy plan in as many days as he tried to chip away at his Democratic rival’s support among Black and Hispanic voters and in key battleground states.

At a “Black Voices for Trump” event in Atlanta, Georgia, Trump announced what his campaign dubbed a “Platinum Plan" laying out his “promise to Black America” if he wins a second term, including a push for economic development and loan money and a pledge to designate Juneteenth as a federal holiday. Juneteenth, which commemorates the end of slavery in the United States, is so named because June 19, 1865, is when slaves were freed in Galveston, Texas.

The announcement came during a two-day campaign swing that ticked off a long list of boxes, both geographically and with key constituencies.

He unveiled what aides termed a “vision” for health care in North Carolina, where polls show him and Democratic presidential candidate Joe Biden effectively tied. He held a rally in Jacksonville, Florida, one of the most hotly contested battleground states. He courted Hispanic voters near Miami and Black voters in Atlanta. And he held another rally Friday night in Newport News, Virginia. Biden is well ahead of Trump in that state, but the location is close to key North Carolina counties that are difficult for the president to visit, according to the campaign, because not all airports can accommodate Air Force One and its landing requirements.

Trump has tried to contrast his jam-packed schedule with Biden, who has made just 12 visits outside of Delaware since his Aug. 11 selection of California Sen. Kamala Harris as his running mate, worrying some Democrats with his low-key approach.

Trump complained in Atlanta that Biden “never goes out!” and said losing the Nov. 3 election would sting even worse if he lost to a man who never campaigns.

Trump also made rare references to the recent killings of Black men and women at the hands of police, which have sparked massive protests across the nation. Trump said the nation grieves for the “senseless” deaths of Breonna Taylor, George Floyd and Ahmaud Arbery, while continuing to lash out at demonstrators.

“Our hearts break for their families and for all families who have lost a loved one. ... But we can never allow mob rule,” he said, denouncing the Black Lives Matter movement. “This is an unusual name for an organization whose ideology and tactics are right now destroying many Black lives,” Trump charged.

The plan unveiled Friday included a long list of promises, with few details on how they would be paid for or fulfilled.

“If you vote Republican over the next four years, we will create 3 million new jobs for the Black community, open 500,000 new black-owned businesses, increase access to capital in Black communities by $500 billion,” he said. The plan also calls for expanding opportunity zones, designating the Ku Klux Klan and antifa as terrorist organizations and creating a national clemency project to “right wrongful prosecutions and to pardon individuals who have reformed.”

Trump claimed that Democrats like Biden have taken Black voters “for granted.”

“He doesn’t know Black Americans like I do,” added Trump, who has a history of making racist remarks.

Biden responded in a statement before Trump spoke.

Biden also pointed to the nearly 6,800 Georgians who have died of the coronavirus, which has disproportionately impacted Black and Hispanic communities, as well as Trump’s efforts to dismantle the Affordable Care Act.

On Thursday, Trump unveiled a health care “vision” more than three-and-a-half years into his presidency and signed an executive order that included a pledge to protect people with preexisting medical conditions from insurance discrimination — even though that right is already guaranteed in the Obama-era health law his administration is asking the Supreme Court to overturn.

In Virginia on Friday, he said he would extend a moratorium on offshore drilling to the Virginia and North Carolina coasts. But then he told the rally crowd, "If you want to have oil rigs out there, just let me know, we’ll take it off.”

Trump has been campaigning with little regard for the virus, which has now killed more than 200,000 people in the United States. At the Atlanta event, there was no effort at social distancing, even though nearly half of the ballroom where the event was held was empty. His rally in Newport News Friday night drew thousands of supporters despite rainy weather most of the day; most did not wear masks.

On Friday morning, at his golf club in Doral, Florida, Trump tried to blunt Biden’s support among Hispanic voters at a “Latinos for Trump” roundtable. Trump’s campaign is increasingly confident that his support is growing with the demographic, including in Florida, one of the most competitive 2020 battlegrounds, where elections are often won by a single percentage point.

An NBC-Marist poll of Florida voters released earlier this month found Latinos in the state about evenly divided between Biden and Trump — a major change from the same poll in 2016, when Democrat Hillary Clinton led Trump by a 59% to 36% margin. But a Monmouth University poll also conducted this month found Biden well ahead of Trump among Latino voters in the state, 58% to 32%.

Because of mounting concerns that Biden’s standing is slipping, the campaign has embarked on an urgent effort to try to shore up support among older voters, suburbanites and African Americans to try to make up for losses elsewhere.

Hispanic voters in Florida tend to be somewhat more Republican-leaning than Hispanic voters nationwide because of the state’s Cuban American population, which Trump acknowledged several times in his remarks.

Carrie Underwood named top artist at CMT Music Awards
Oct 22, 2020 9:56 AM
Comments
We welcome your feedback and encourage you to share your thoughts. We ask that you be respectful of others and their points of view, refrain from personal attacks and stay on topic. To learn about our commenting policies and how we moderate, please read our Community Guidelines.