In this week's What's Up Wednesday, meet the unconventional Sean Stephens, whose life and business philosophy is inspired, in part, by his world experiences at the age of 15
0
Jun 12, 2019 4:34 PM By: Natasha Philpott 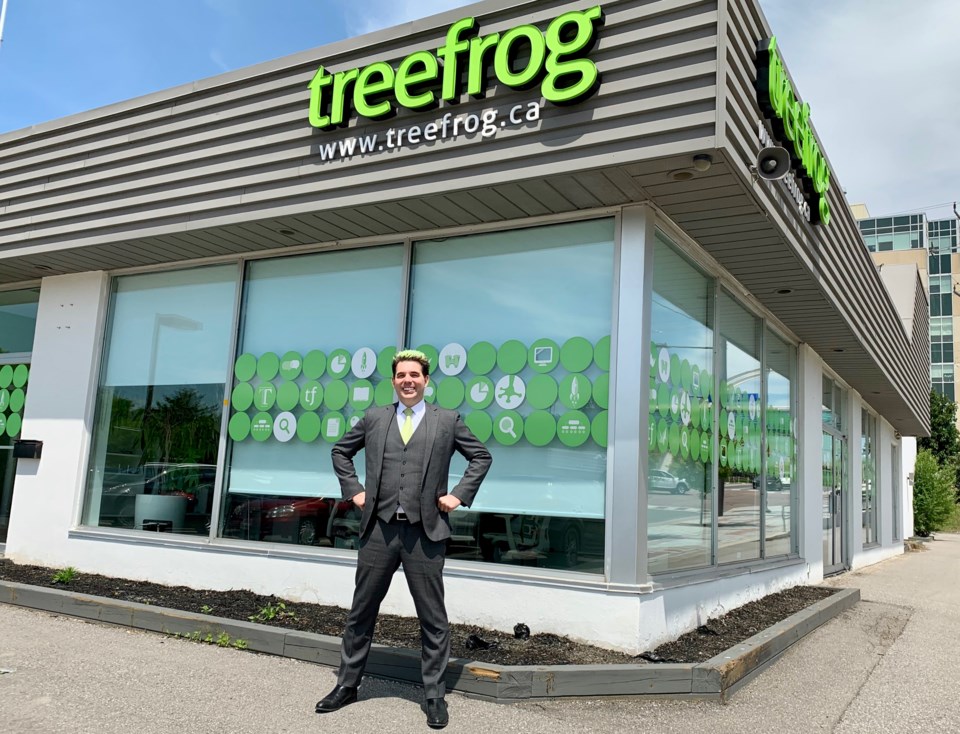 Sean Stephens is renowned not only for his green hair, but for his successful firm, Treefrog, which some refer to as the Google of the North. Debora Kelly/NewmarketToday

Imagine your commute to your job was only 11 minutes long? Or having a hairdresser come cut your hair at work? How about having a Lego room in your office when you want to bring in the kids?

These are just some of the things the green-haired Chief Executive Officer Sean Stephens has at his digital marketing agency, Treefrog, in Newmarket.

As their website states: “We here at Treefrog are proud to call Newmarket home and have long since found that the town really does live up to its own motto ‘small town charm, big city convenience.”

Sometimes referred to by clients as the “Google of the North”, Stephens says he values his employees and likes to keep them engaged through fun and exciting projects, as well as through encouraging a fun office culture.

“Usually work is this horrible idea that nobody wants to be there,” he said.

But he has made a strong effort to change that way of thinking. He wants work to be fun, with a work hard, play hard mentality.

Most of Treefrog’s employees are raising families in Newmarket and are over the hustle and bustle of commuting to Toronto.

From flexible working hours to pizza lunches every Friday, Stephens says he likes to make sure his team is happy to keep them motivated and engaged.

“The average commute at Treefrog is 11 minutes and about half the company can walk to work in less than 15 minutes,” Stephens said.

With just under 50 employees, the company prides itself on innovative and unique branding for its clients, as well as the development of new, high-tech products.

“When you come to Treefrog, you don’t just come to build your website, you come to genuinely help yourself get better sales, get a better reputation, or help attract better employees, so we really look at the big picture,” he said of the company’s services and mission.

Stephens has an eclectic background, which he explains in full detail on his bio section of the Treefrog website. He grew up on a family-run dairy farm in Warkworth, Ontario and eventually moved to Africa with his family to become missionaries to help heal those affected in the Angolan Civil War.

As the war intensified, Stephens and his family moved back to Canada for a short period and then returned to Africa, to Harare, Zimbabwe. It was there the family enjoyed a bit of luxury and was able to afford to travel a bit. From Europe to Asia, Stephens was a world traveller before the age of 15.

When the war was over, the family returned to Canada once again and Stephens attended high school in Winnipeg, a drastically different learning experience from authoritarian African schooling.

After high school, he went off to college in Calgary and received a diploma in religious studies. He then went to Carleton University and received a degree in both English and political science.

After graduation, he decided he wanted to become a professional musician. He toured and recorded folk-rock-reggae music. He made six CDs, played at various bars in the Toronto area and headlined plenty of music festivals. But this wasn’t paying the bills, so he decided to change streams and venture into the business of the World Wide Web.

It was the early ‘90s, when the internet was just taking off, and he was learning to program and working as a computer repair technician. An acquaintance reached out to Stephens to see if he would be interested in joining his web business, Treefrog.

“There were three of us who threw our businesses together, started in a basement in Aurora, and eventually made (our) way to Newmarket,” he explained of the company’s early stages.

As the designated programmer, Stephens spent countless hours studying web technologies and building websites, getting the company off the ground.

“It was three people with three different kinds of businesses…and eventually I bought the business and we have now grown significantly…and we still are the largest web design agency north of the 401,” he said.

His cultivated upbringing and background has made him the adventurous businessperson he is today.

“I take a lot of risk, a lot of risk. And that sort of really helps from an innovation standpoint, because we do things that are absolutely crazy every week,” he said.

“I literally just got out of a meeting where we are building a robot for operating rooms… it (the robot) sits in the operating room and watches surgeons, so you can log in as an external doctor and move stuff around with your iPad,” he shared.

“So really doing a lot of really exciting and interesting things in both web and product development,” he said.

Treefrog has clients from all over the world, including Panama, Ireland and Japan, but 90 per cent of its clientele is from Newmarket.

In addition to Treefrog, Stephens is the founder of three other startup companies, Lasso, Perfect.org and Ubiquitous.

“We kind of function as an incubator, so we work really closely with startups, I’m really involved in the startup world,” he said.

When asked how he has time to do all his work, be a dad, and find time for his music, Stephens said he lives his life very efficiently.

“I work basically seven days a week…but I love it. Everything is a hobby for me here. It’s like a playground,” he said.

True to its branding colours, the office is totally decked out in green walls and décor. Stephens even dyes his hair green in the front, and purple, blue and orange at the back to represent Treefrog and his three other startup companies.

“It takes me about six hours a month to do,” he said of his hair maintenance.

Treefrog likes to keep engaged in local events, programs and charities, including NewMAKEit, a space that enables members of the community to collaborate and create their own projects. They are also one of the main sponsors of Newmarket’s Pride parade.

“We are deeply embedded in local culture and life, and we love it, we love Newmarket,” he said.

Treefrog continues to grow and cultivate a modern and exciting lifestyle for both its employees and clients.

“We’ve got lots of creative things happening all the time,” said Stephens.


This has been shared 0 times

Friendship key ingredient on menu for this Newmarket restaurateur
Oct 30, 2019 8:00 AM

Friends shared passion for healthy food spurs Humble Roots' success
Sep 11, 2019 4:36 PM
Comments
We welcome your feedback and encourage you to share your thoughts on this story. We ask that you be respectful of others and their points of view, refrain from personal attacks and stay on topic. To learn about our commenting policies and how we moderate, please read our Community Guidelines.