“He built bridges with his passion for helping others”

Ugandan Asians mourn the passing of a community titan, as they prepare to mark the 50th anniversary of their arrival in Canada. The post “He built bridges with his passion for helping others” appeared first on New Canadian Media .
New Canadian Media May 9, 2022 3:42 PM May 9, 2022 4:35 PM 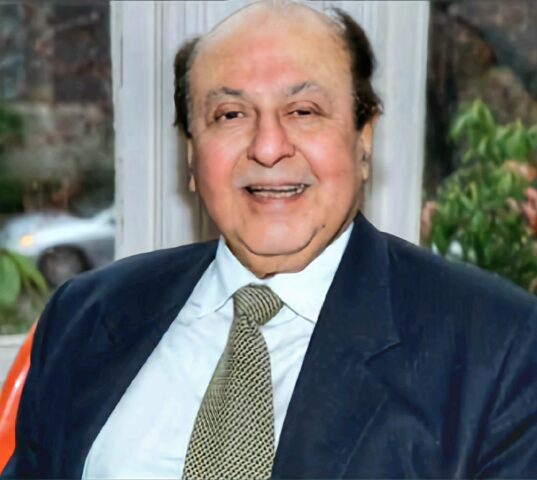 As Ugandan-Asian refugees prepare to mark the 50th anniversary of their arrival in Canada this year after being ousted from their African homeland, John Halani will be remembered as the man who helped scores of them resettle in Greater Vancouver.

Halani, a titan in the community and a tireless advocate for immigrants and refugees, passed away on May 2, as his fellow Muslims, were celebrating the end of Ramadan. He was 85 years old.

A leader in Canada’s Shia Imami Ismaili Muslim community, generally known as the Ismailis, Halani, was the Honorary Consul for Uganda in British Columbia for more than two decades.

“He built bridges with his passion for helping others,” said Sam Hirji, a Vancouver-based printer, who was part of the exodus from Uganda, some 50 years ago.

“For us Ismailis’ he was the go-to-guy for any and all community projects…he was generous to a fault,” Hirji told New Canadian Media.

Halani, arrived in Canada in 1972, as part of the Ugandan Asian refugee exodus after being expelled by the dictator, Idi Amin. This was Canada’s first major resettlement of non-European and largely non-Christian refugees in the postwar period.

In Uganda, Halani was a 35-year-old business owner, local councillor, and school board chairman.

Within two weeks of his arrival, Halani had found a job selling window glass and moved his family out of the hotel and into an apartment in North Vancouver. His wife got a job as a clerk at the clothing store Fields.

“When we went to the Manpower (department) the first day and we were dressed up with suits and ties, the lady at the counter said ‘Why are you all so well dressed up? We have jobs lined up in warehouses.’ And I told them that we are businesspeople; we are looking for jobs in the offices. They were a bit surprised,” Halani told the Vancouver Sun in a 2012 interview.

By 1975, Halani had made enough money to lease the Robsonstrasse hotel and the following year took on a second hotel, the Tropicana in Vancouver’s downtown core.

“He lived to help others and was a consummate community volunteer from his early days in Uganda and later here in Vancouver with the Immigrant Services Society,” said Farouk Verjee, past President of the Ismaili Council for Canada.

“I recall marking the first anniversary of our arrival at St. Andrews Wesley Church on Burrard street, with a potluck supper. The refugees led by John made a donation at the time to thank Canada,” said Verjee.

“John worked briefly at a job, but business was his passion, and independence his goal,” said Verjee.

“He established the Ethno-cultural Business Council, to assist new immigrants to go into business and to support each other, rather than taking menial jobs. Many successful businesses were established with his support and that of the Provincial Government.”

When President Yoweri Kaguta Museveni came into power in Uganda in 1986, he accepted the World Bank’s advice to restore the confiscated businesses and properties of the expelled Asians.

Halani chaired a committee on behalf of Ugandan Asians living in Vancouver to gather documentation and liaise with the government in Kampala to organize the effort, which continues to this day.

The Aga Khan, spiritual leader of the Ismaili Muslims, honoured Halani with the title of “Rai” (the respected one) during his Golden Jubilee Celebration in 2007.

He was named as one of Canada’s top 25 immigrants by the Canadian Immigrant Magazine in 2009.

“He has offered unconditional support to the Uganda Cultural Association of BC in many ways, from financial assistance to community volunteering. He has also been back to Uganda many times with medical professionals to help eradicate the growing health care problem [there],” said the association.

Halani leaves behind his beloved wife Anar, two sons and several grandchildren. The community will gather on May 10th at the Burnaby Lake Ismaili Jamatkhana (house of worship) to honour Halani, for his lifelong dedication to helping refugees and new immigrants to Canada.

The post “He built bridges with his passion for helping others” appeared first on New Canadian Media.

The healthy secret about frozen food people in Newmarket should know