TORONTO — The Toronto Wolfpack know where and when they will take their next step toward promotion into the elite Super League. Still to be determined is who the trans-Atlantic rugby league team will face.
0
Aug 15, 2019 1:44 PM By: Canadian Press 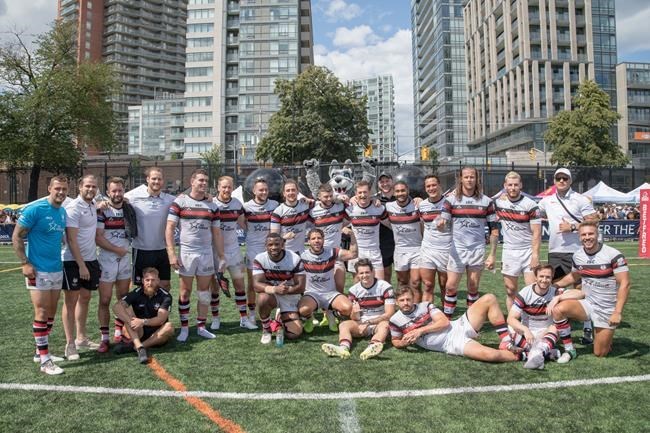 TORONTO — The Toronto Wolfpack know where and when they will take their next step toward promotion into the elite Super League. Still to be determined is who the trans-Atlantic rugby league team will face.

The Wolfpack announced Thursday that their first playoff game, dubbed "Semi-Final 2," will be at Lamport Stadium on Sept. 22 with kickoff time of 1:30 p.m. ET. Toronto, long having wrapped up top spot in the second-tier Betfred Championship, will get a week off after the regular season ends before taking on the winner of a qualifying match between the second and third seeds.

The winner of the semifinal will advance to the final, while the loser will get another chance to advance in a preliminary final the following week.

The winner of the Oct. 5 playoff final will advance to the Super League.

Toulouse Olympique, the only team to beat the Wolfpack this season, were tied for second place with the Leigh Centurions at 34 points as of Thursday. The York City Knights (33 points) and Featherstone Rovers (32 points) were close behind with three games left in the regular season.

Toronto, in its third season, missed a chance to advance to the Super League last season when it was defeated 4-2 at home by the London Broncos.

The Wolfpack take an 18-game winning streak into Saturday's match against visiting Rochdale.

Canucks GM says team could hold camp in U.S. due to Canada's quarantine rules
May 27, 2020 7:41 PM
Comments
We welcome your feedback and encourage you to share your thoughts. We ask that you be respectful of others and their points of view, refrain from personal attacks and stay on topic. To learn about our commenting policies and how we moderate, please read our Community Guidelines.