VANCOUVER — Bob Lenarduzzi is out as president of the Vancouver Whitecaps as the club struggles in the standings and continues to grapple with harassment allegations.
0
Aug 16, 2019 6:48 PM By: Canadian Press 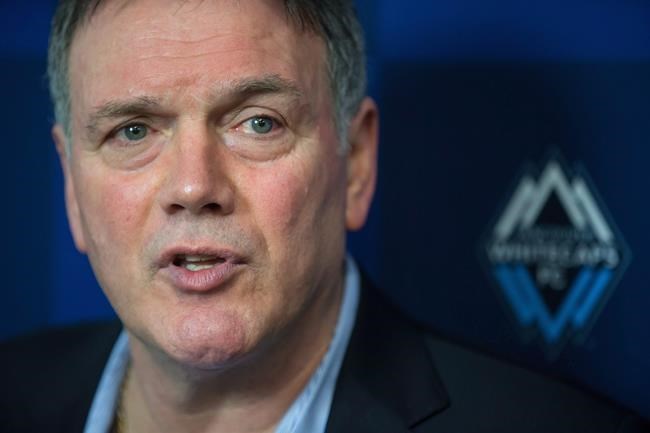 VANCOUVER — Bob Lenarduzzi is out as president of the Vancouver Whitecaps as the club struggles in the standings and continues to grapple with harassment allegations.

But the Canadian soccer stalwart still believes he has a lot to offer the club in a new role.

"I've been at it for 45 years. The last year has been a difficult one, no question," he told reporters on Friday after the Major League Soccer team announced that it is eliminating the role of president.

Instead, the Whitecaps have started a global search for a sporting director who will lead the technical direction of the club and report directly to ownership.

"Given the opportunity that's been presented, I think that there is room for club growth," Lenarduzzi said. "And given the investment that's being talked about … I see this club going in the right direction."

The new sporting director will likely come from outside of the league and will need to be an entrepreniual type who can re-write the rules when it comes to things like analytics, said 'Caps co-owner Jeff Mallett.

The club would like to hire someone by the end of the MLS season but is willing to wait for the right candidate, he added.

"We need to step it up and continue to invest and get ourselves in a position to compete across every level and everything we're doing here at the football club," Mallett said.

Lenarduzzi will stay with the 'Caps as a club liaison. He described the role as being about building and growing relationships between the club and various other organizations, and about ensuring the Whitecaps are "significantly" represented on the Canadian national team, especially as the country prepares to co-host the 2026 World Cup.

Whitecaps fans began calling for Lenarduzzi to be dismissed this season as the rebuilt team failed to produce results on the field, tying a club record five-game losing streak in July. Vancouver sits last in the West with a record of 5-12-9.

He also came under fire earlier this year for how the club navigated an alleged decade-old abuse scandal with a Whitecaps women's team.

Doctored images of Lenarduzzi wearing a clown nose and plastered with the hashtag #BobbyOut were spotted around B.C. Place during some games this season.

"If I were to suggest it hadn't bothered me, I'd be lying. Because it impacts you," Lenarduzzi said. "Having said that, I signed on for the job and I've been through it as a player, as a coach and as the president. So I accept it. It comes with the territory. And my hope is that with the announcements today, moving forward I can be a big part of changing that narrative as well."

Lenarduzzi, 64, started with the Whitecaps as a player in 1974, then served as the team's coach, director of soccer operations and general manager before being appointed president in 2007.

The Vancouver native is a fixture in Canada's soccer community, having made 47 appearances with the national squad, including stops at the 1984 Olympics and 1986 World Cup. He also coached the team between 1992 and 1997.

Lenarduzzi had already been installed as the Whitecaps' president when Vancouver was awarded the second Canadian MLS franchise in 2009.

While the 'Caps have seen some success since entering the league in 2011, the club did not qualify for the playoffs in five of nine seasons of MLS play. The team has never made it past the conference semifinals, last going that far in 2017 when the Seattle Sounders ousted the Whitecaps from contention.

Recently, Whitecaps fans have seemed to tire of the club's lack of success and its response to allegations that a former coach of the women's team had bullied, harassed and abused players more than a decade earlier.

Mallett finally spoke about the controversy and offered victims an apology at the beginning of May, more than two months after the allegations surfaced.

On Friday, Mallett said the scandal was not a factor in the club's structural changes.

Frustration among fans has been apparent at Whitecaps home games, with attendance dwindling to a season-low of 16,138 on May 15. Some in the stands watched the games with paper bags over their heads.

"I'm well aware of what's going on with the club, as you can imagine," Mallett said, adding that the club will continue to work on various issues, including the abuse allegations and ticket sales.

Some fans have blamed the team's disappointing performance on the club's reluctance to spend on top talent.

Data released by the MLS Players Association shows none of Vancouver's players received more than US$1 million in guaranteed compensation this season. The top earner was striker Fredy Montero, who brought in $968,000. He has six goals and two assists for the 'Caps this year.

The club received an influx of cash by selling a home-grown player to one of the world's biggest clubs last year.

Lenarduzzi was involved in the record-breaking deal that sent teen midfielder Alphonso Davies to German Bundesliga giant Bayern Munich, and the then-president said the money would be invested back into the sporting side of the club.

The Whitecaps were linked to some high-profile players in this summer's transfer window, including Canadian Lucas Cavallini, who currently plays in Mexico.

The coach acknowledged that the 'Caps have a history of not wanting to shell out big dollars but said what's most important right now is the need to bring in the right talent to improve the team.

"I think it's a label that's stayed with the club for the last years, the fact that not having an (Zlatan Ibrahimovic) here or a (Wayne) Rooney or a (Carlos) Vela here. But I think that slowly is changing," he said.

Dos Santos added that Whitecaps management have been speaking about the possibility of hiring a sporting director since last November or December, shortly after he was hired as coach.

Still, Lenarduzzi knows he's been the fall guy for many of the Whitecaps problems in recent years.

"I think it's safe to say … a lot of the things that I've been blamed for, a lot of them I haven't had a whole lot to do with," he said. "So I take all of the criticism with a grain of salt. I've been the front-facing person in the organization for 45 years and so as a result of that, people view me as being responsible for most of what goes on."