VANCOUVER — Wayne Rooney is expected to draw a crowd in Vancouver this weekend, but the Whitecaps aren't letting the soccer superstar change their game plan. Rooney is set to make his first — and likely last — visit to B.C. Place on Saturday when D.
0
Aug 16, 2019 8:00 AM By: Canadian Press 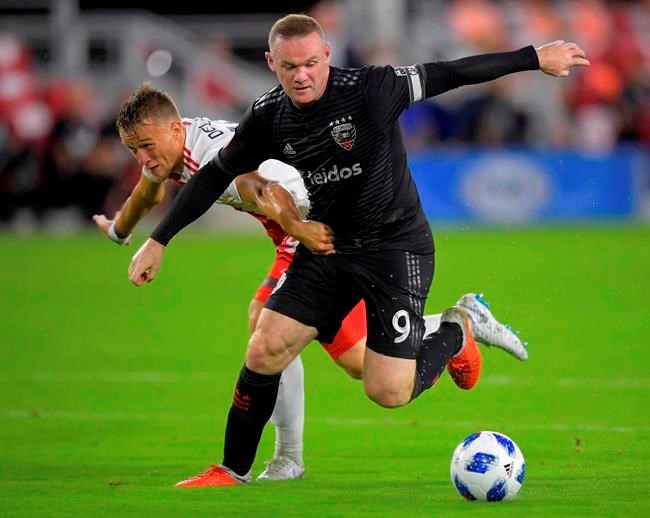 VANCOUVER — Wayne Rooney is expected to draw a crowd in Vancouver this weekend, but the Whitecaps aren't letting the soccer superstar change their game plan.

While the former England captain is likely to draw in some extra fans, he won't be the focus come game time, said Russell Teibert.

"It'll always be a pleasure to be on the field with guys of that level and pedigree," the Whitecaps midfielder said after training on Thursday. "But we're not playing against Wayne Rooney, we're playing against D.C. United. So that's what we've got to remember."

Rooney made his Major League Soccer debut against Vancouver in D.C. last summer, coming off the bench in United's 3-1 win.

"He changed the dynamic of that game and I think he changed the look of D.C. United," Teibert said. "When you add a player of that class and that quality, he's going to make the guys around him better."

Before wowing North American crowds, Rooney played in the U.K. where he's still the record goal scorer for both Manchester United and the English national team.

Earlier this month, the 33-year-old announced that he plans to head back overseas in January, joining Derby County as a player coach.

First, though, Rooney plans to finish out the MLS season where he's been a dominant force for United this year, putting away 11 goals, the fifth most in the league.

"He still has the same passion and attitude and mentality than when he was with Manchester United or the English national team. Every time you play a player at that level … it's always special for every player, special for the fans, for us," said Whitecaps coach Marc Dos Santos.

It's been a difficult season for the Whitecaps but Dos Santos said they can build off a trio of solid performances on a recent road swing.

One difference in Portland was that Vancouver creating chances to score, said defender Jake Nerwinski.

Vancouver had 16 shots in the game and four were on target, including a goal by Yordy Reyna that was controversially called offside following video review.

"I thought we played pretty well for the most part. We created a lot more opportunities than we have in the previous three or four games. We just didn't finish," Nerwinski said.

When it comes to facing Rooney and United this weekend, the Whitecaps will need to stay strong defensively, he added.

The squad will also need to keep watch on a familiar face — former Vancouver midfielder Felipe Martins was traded to D.C. earlier this month and will make his return to B.C. Place on Saturday.

"You know he's going to be extra motivated. That's just the guy he is," Nerwinski said of his former teammate. "He's probably going to put in a few good, hard tackles because that's how he has been his whole career. But he's on the other team now, he's our enemy and we know how to get the best of him."

WAITING GAME: The Whitecaps are still waiting for Honduran winger Michaell Chirinos to join the team after acquiring him on loan from Club Deportivo Olimpia earlier this month. Dos Santos said on Thursday that he's frustrated paper work to get the 24-year-old playing in Canada has taken so long, but the coach is hopeful Chirinos will be available for games later this month.

OFFENSIVE OPTIONS: The Whitecaps newest forward, Tosaint Ricketts, is expected to be an option this weekend. The club signed the 32 year old last week, bringing him over from FK Suduva in Lithuania where he scored eight goals in 15 appearances. Ricketts is from Edmonton and previously played three seasons with Toronto FC.

GOLDEN GOAL: A lethal shot by Whitecaps striker Theo Bair was voted the MLS Goal of the Week. The 19-year-old Ottawa native put an acrobatic shot into the top left corner of the net in Portland last Saturday. The goal marked Bair's first in MLS.