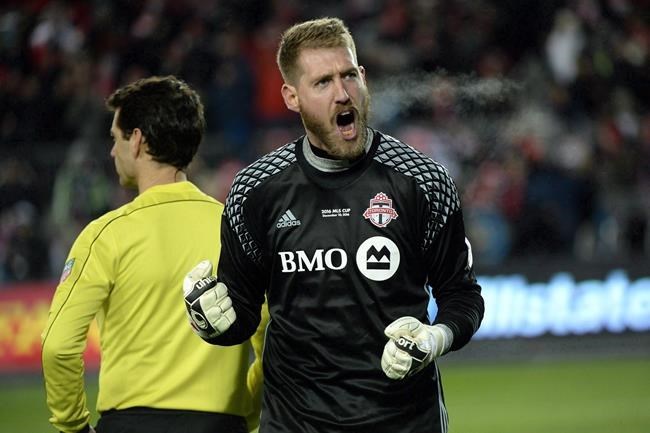 Toronto coach Greg Vanney will see former assistant Robin Fraser, a longtime friend and former teammate, in the other coach's box. Clint Irwin, a former TFC player, is expected to start in goal for Colorado.

"It will be strange," said Vanney. "Because I know some of the philosophy that they're going to use, there is a lot of some stuff that we used here ... They're obviously excited as a group and have played a couple of good games in which they've been able to get good results. So they're feeling good about what they're doing."

But a Rapids loss Sunday, combined with other results, could officially eliminate Colorado from playoff contention. A trip to the post-season has long seemed a pipe dream for the Rapids, given their 0-9-2 start to the season.

For Vanney, the return to BMO Field is welcome after road games on the postage-stamp pitch at Yankee Stadium and artificial turf of New England and FC Cincinnati.

"I think we are really close," said Vanney when asked if his team is finally firing on all cylinders. "Earlier in the year and through stretches of it, we were talking about bigger things — which was the profile of players that we still needed. It was bigger details.

Vanney's roster is also getting healthy. Fullback Justin Morrow, who missed the last three games with a quad injury, trained Friday although he is questionable for Sunday.

Venezuelan winger Erickson Gallardo, who came off early in the 1-1 midweek tie with NYCFC, also saw some training time Friday. Midfielder Nick DeLeon, who is nursing several knocks, did not train as part of a maintenance day.

Fullback Richie Laryea and midfielders Jonathan Osorio and Liam Fraser are back from international duty with Canada.

Competition is fierce in the Toronto lineup with striker Jozy Altidore, Spanish playmaker Alejandro Pozuelo, French winger Nicolas Benezet, captain Michael Bradley and Marky Delgado all seeming locks in front of the backline of Vanney's preferred 4-3-3 formation. The 23-year-old Gallardo has shown flashes of his speed and guile on the wing but has yet to pass the hour-mark in his four league starts.

Fourth in the Eastern Conference going into weekend play  — ahead of D.C. United on goal difference — Toronto is looking to consolidate its position in the top four so as to have home-field advantage in the first round of the post-season.

If the playoffs started today, No. 4 Toronto would host No. 5 D.C. United in the first round with the winner advancing to play at the first-place team (currently New York City FC).

Sunday marks the third game in eight days for both teams.

Toronto is in the third leg of a seven-match, 22-day stretch, a run complicated by the two-legged Canadian Championship final that opens next Wednesday in Montreal.

Irwin is expected to start in the Colorado goal Sunday, with Tim Howard nursing a hamstring injury. The 30-year-old Irwin spent three seasons with Toronto before being dealt to Colorado last December.

Irwin started for Toronto in the 2016 MLS Cup final but lost his starting job to Alex Bono the next season. Bono has since been surpassed by Quentin Westberg.

ONE TO WATCH: Colorado's Andre Shinyashiki, a Brazilian who played at the University of Denver, is staking his claim to rookie of the year with seven goals in 27 appearances.

THANK YOU: Sunday's game is TFC's eighth annual Canadian Armed Forces Appreciation Day. Some 400 members of the military and their families will be on hand.

Canadian Liam Fraser ready for his Toronto FC close-up in Bradley's absence
Jan 21, 2020 3:59 PM
Grey Cup-champion Winnipeg Blue Bombers shuffle their coaching staff
Jan 21, 2020 3:34 PM
Canadian skier Andrew Longino wins gold in men's halfpipe at Youth Olympics
Jan 21, 2020 3:27 PM
Comments
We welcome your feedback and encourage you to share your thoughts on this story. We ask that you be respectful of others and their points of view, refrain from personal attacks and stay on topic. To learn about our commenting policies and how we moderate, please read our Community Guidelines.