Too much grit? Marketing prof wonders if Gritty's rough edges will be tweaked

"Gritty" — the hip-swinging, arm-flailing, ear-smoking, googly-eyed hot mess of a Philadelphia Flyers mascot — returned to the spotlight Tuesday after a debut that sent the social media world spinning and left hockey fans unsure whether to applaud or
0
Sep 25, 2018 4:18 PM By: Canadian Press 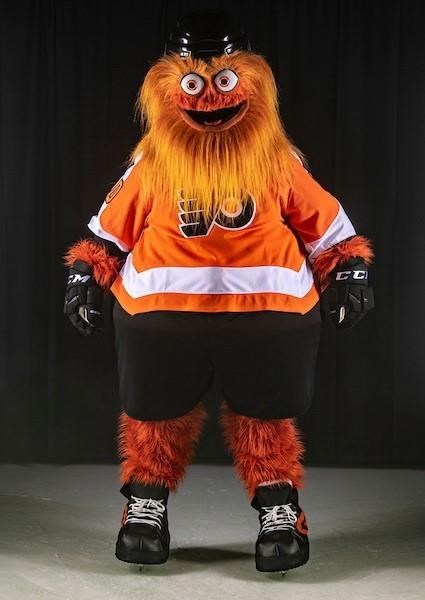 "Gritty" — the hip-swinging, arm-flailing, ear-smoking, googly-eyed hot mess of a Philadelphia Flyers mascot — returned to the spotlight Tuesday after a debut that sent the social media world spinning and left hockey fans unsure whether to applaud or grimace.

The seven-foot creature, complete with a ZZ Top-ish wild orange beard, was on "Good Morning America" after making on-ice appearances during breaks in a pre-season game against the Boston Bruins a night earlier. The TV spot came after a dizzying number of memes, gifs and Twitter buzz triggered an outpouring of reaction.

Some felt Gritty's vibe was intense, edgy, perhaps even a tad frightening. Others liked that Gritty wasn't cut from the traditional cuddly mascot cloth.

"I'll call it the Donald Trump school of marketing here that all publicity is good publicity," said McMaster University professor Marvin Ryder. "I can't remember a mascot debut that has been more covered than this."

Gritty looks like a zany combination of the Montreal Canadiens' mascot "Youppi!", the Muppets' character "Animal," with a dash of "Chucky" from the "Child's Play" slasher film series.

According to a Flyers release, Gritty was forced out of a hermit-like existence when construction at the arena disturbed his secret hideout. His bio also describes him as "the ultimate Flyers fan" and "loyal but mischievous," with a penchant for eating snow left behind by the Zamboni ice-cleaning machine.

Naturally there's a Gritty account on Twitter, and it had 46,000 followers and counting as of Tuesday afternoon. A post Monday evening said, "Goodnight, internet," along with a picture of the orange mascot squeezing champagne out of a squirt bottle into a glass, a cheeky nod to Kim Kardashian's infamous Paper Magazine photo shoot.

Ryder said it will be interesting to see if the NHL team tweaks the mascot image to dull any rough edges.

"They got a lot of coverage on this mascot but it's mostly because, 'Look how weird he looks, look how ugly he is, look how scary he is,'" Ryder said from Hamilton. "That's not exactly the message I'd want."

So what do they make of all the attention and some of the mixed reaction?

"Gritty is loving it," Helfrich said with a smile. "If he could talk, he would say, 'Bring it on.' He eats his opponents for breakfast."

The segment was capped with a dancing Gritty hamming it up for the camera as wisps of smoke appeared behind his helmeted head.

"He's the perfect mascot heading into Halloween," Ryder said. "But I'm not sure I'd want him around at Christmas-time or in February."

Gritty is just the second mascot in Flyers history after the short-lived "Slapshot" in 1976.

"I probably would have dialled it back and gone for something just a little more cuddly," Ryder said. "But remember this is the team, the Philadelphia Flyers, who gave us the 'Broad Street Bullies' once upon a time. So they're trying to make this thing I guess a little bit more of that reactive character."

Tokyo Olympics just beginning the race to reset themselves
May 28, 2020 10:07 AM
Hockey Canada cancels summer camps, going virtual with training camps
May 27, 2020 9:44 PM
Comments
We welcome your feedback and encourage you to share your thoughts. We ask that you be respectful of others and their points of view, refrain from personal attacks and stay on topic. To learn about our commenting policies and how we moderate, please read our Community Guidelines.