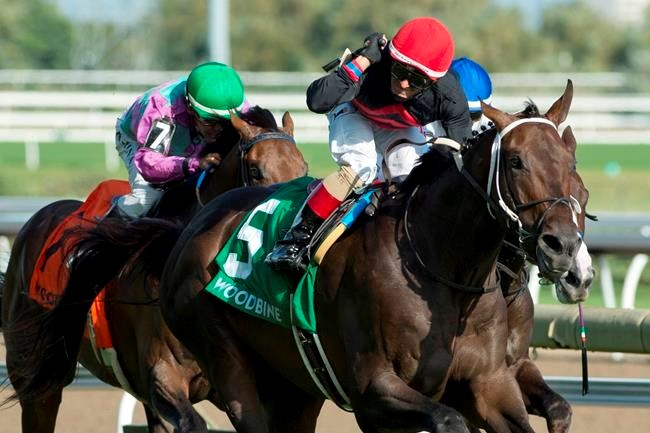 TORONTO — There's something about the $400,000 Breeders' Stakes that agrees with Rafael Hernandez.

Hernandez rode Tone Broke to a 1 1/2-length victory in the 1 1/2-mile turf race Saturday at Woodbine Racetrack in 2:30.43. It was Hernandez's third win in four years in the final jewel of the OLG Canadian Triple Crown.

And it wasn't exactly a smooth trip for Hernandez as Tone Broke's head flew back at the start of his debut on grass.

"He played around a little bit with the head before the start," Hernandez said. "My gate crew did a great job.

"They tried to straighten him up but they opened the gate so quickly and he just came out with the head high. He gave me a hard time to relax him but by the first furlong he was relaxed good. It's not how you start, it’s how you finish."

After Tone Broke settled, Hernandez then had to deal with traffic.

"Just at the three-eighths (pole) I had to wait," Hernandez said. "I was stuck there.

Hernandez earned his first Breeders' crown in 2016 aboard Camp Creek before guiding Channel Maker to victory the following year.

Tone Broke stood fourth after a mile and dropped to fifth with a quarter mile to go. However Hernandez said he remained patient coming down the stretch.

"It’s a good thing we have a long stretch," he said. "All you have to do is be patient.

"I used my patience and as soon as I put him clear, he did the rest."

With the victory, Tone Broke, the 2/1 second pick, earned two-thirds of the Triple Crown after winning last month's $400,0000 Prince of Wales Stakes in Fort Erie, Ont. with jockey Ricardo Santana Jr. aboard.

Luis Contreras rode Tone Broke to third in the $1-million Queen's Plate on June 29 at Woodbine.

Contreras, a two time Breeders' Stakes winner, rode He's a Macho Man, at 6/1 odds, to second Saturday for the horse's best finish in the Triple Crown. He's a Macho Man, trained by Josie Carroll, was fourth in both the Plate and Prince of Wales.

Avie's Flatter, the 4/5 race favourite also trained by Carroll, was third in Saturday's nine-horse field. Carroll, inducted into the Canadian Horse Racing Hall of Fame this year, was second in all three Triple Crown races as Avie's Flatter was the runner-up in both the Plate and Prince of Wales with jockey Javier Castellano aboard.

The remainder of the field, in order of finish, included: Encierro, Lucas n' Lori, Rising Star, Pay for Peace, Seguimi and Flashymeister.

"I really didn't, going a mile and a half, to be honest but he proved me wrong," Fleming said. "It  looked like it was going to be a replay of the Queen's Plate a little where he didn't want to relax early and Raffi got him to relax and everything went smooth.

"We had a little traffic trouble and my heart was pumping in the turn. But luckily Tone Broke was talented enough to overcome it."

There was no Triple Crown on the line Saturday with Wando remaining the last horse to achieve the feat in 2003. One Bad Boy won the Plate but was third in the Prince of Wales Stakes.