Saints' gashed defensive front happy to have Onyemata back

NEW ORLEANS — Saints defensive tackle David Onyemata has returned from suspension not a moment too soon for New Orleans' defensive front.
0
Sep 13, 2019 10:25 AM By: Canadian Press 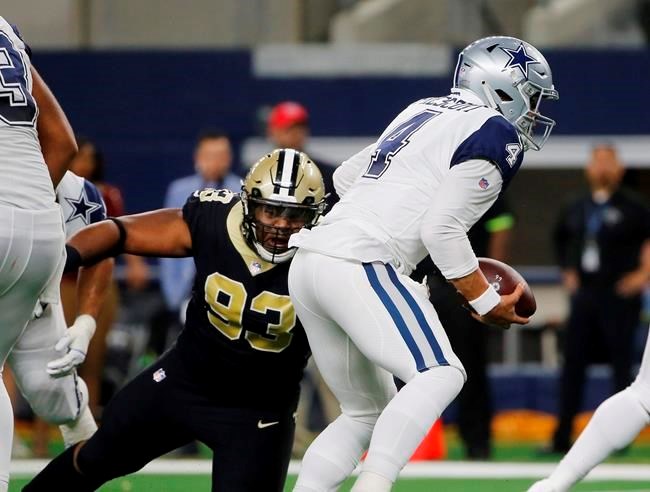 The Saints allowed more yards rushing in Week 1 against Houston — 180 — than in any game last season and now have to face the Rams' Todd Gurley — the NFL's offensive MVP just two seasons ago.

"I know we feel like we can play the run better and we are going to see some real good rushing teams here, starting with Los Angeles," Saints coach Sean Payton said.

The Saints' primary rotation along the interior defensive line in Week 1 was missing three prominent players from last season, when New Orleans ranked second in the NFL against the run.

Tyeler Davison left for Atlanta in free agency, 2016 first-round draft choice Sheldon Rankins was not yet ready to return from his Achilles tendon tear last January and Onyemata was serving a one-game suspension in connection with a marijuana citation.

Rankins has been practicing on a limited basis, but it's not yet clear when he'll be ready to play.

Onyemata, however, is healthy and fresh as he finally begins his fourth NFL season.

Onyemata has enjoyed a steep learning curve in the NFL. The native Nigerian never played American-style football until he went to college at Manitoba and learned the game with Canadian rules. Still, the Saints liked the size and raw ability of the 6-foot-4, 300-pound Onyemata enough that they selected him in the fourth round of the 2016 draft.

He played in 16 games as a rookie, either on or special teams, and was a regular on the defensive line by 2017, when the Saints won the first of consecutive NFC South titles. Last season, he also was a more effective pass-rusher and had a career-best 4 sacks.

"His strength and his hands are really what separates him and makes him a dominant force in the run game," Saints middle linebacker Demario Davis said. "He's put a lot of time into becoming a better pass-rusher as well. He's just been an exceptional force for us and it's fun to play behind him."

Onyemata was not permitted to practice last week and could not go to the game, which he watched at home on television. When the Saints pulled out a dramatic victory on Wil Lutz' 58-yard field goal as time expired, Onyemata said he was relieved his absence wouldn't become a story line emerging from a loss.

"It wouldn't have been the best feeling. I'll say that," Onyemata conceded. "You couldn't do much. Just watch and get your mind right to come back and play ball."

The Saints never gave up more than 112 yards in a regular season or playoff game last season. While the Saints gave up 68 yards more than that in Week 1, Payton said one factor was Houston QB Deshaun Watson's scrambling ability. He rushed for 40 yards. Still, Jordan said he "hated" seeing Houston's rushing stats.

"That's not our . That's not what we want our to stand for," Jordan said. "That's not something that you can be proud of."

No coach is pleased to lose a productive lineup regular because of an off-the-field error in judgment. But Payton sounded pleased by the way Onyemata dealt with it.

"He had a really good camp. I think he's handled it well," Payton said. "He's tough-minded. He's a tremendous teammate and a real good football player."

Onyemata sees his NFL career as somewhat surreal, given that he went to Manitoba to study environmental science and had his sights set on a career in Nigeria's oil industry. Having played youth soccer in Nigeria, Onyemata took up American football on the advice of college classmates when he was looking for an activity to satisfy his appetite for playing sports.

Davis said Onyemata's aptitude for applying what he learns has been evident on the field.

"He's where he's supposed to be and doing what he's supposed to do," Davis said. "He's no dummy. He seems like a guy who would have been successful regardless" of whether he ever played pro football.

Onyemata figures he should be at least as productive this season as any previous campaign, if not more so.

"You never stop learning," Onyemata said, adding that his raised expectations stem from "understanding things better, being in the game longer."

Bergeron stays hot with two goals as Bruins topple Flames 4-3
Feb 22, 2020 1:02 AM
Comments
We welcome your feedback and encourage you to share your thoughts on this story. We ask that you be respectful of others and their points of view, refrain from personal attacks and stay on topic. To learn about our commenting policies and how we moderate, please read our Community Guidelines.